You are at:Home»Author: Sean Smyth

Born on 9th May 1988, Sean Smyth lived in Loughinisland with his parents Adrian and Christine and younger brother Philip until June 1997 before the family moved to Downpatrick.  In March 1998, Sean’s life took a turn when he was knocked down as he was crossing the road, suffering a serious head injury and left paralysed, but forces enabled him to return to Primary 7 in Loughinisland after discharge in August and he transferred to St Colmcille’s High School in Crossgar the following year. Hospitalised for a four-month period in his final GCSE year, Sean sat only two of his GCSEs and transferred to St Malachy’s High School in Castlewellan to achieve his Maths and English as well as a GNVQ in Business to boost his GCSE grades. Unsatisfactory grades in the ICT and Double Business A-Levels that followed led him to sit a HND in Computing, before enrolling to a Computer Science degree in Queen’s University Belfast. Finding that his interests lay more in politics than computers, Sean attempted unsuccessfully to transfer to politics after failing exam re-sits and is now intent on sitting an A-Level on the subject.  Prior to his accident, Sean was learning to play the guitar. Since then he has played various sports including wheelchair tennis, archery, canoeing and skiing. He has been playing wheelchair rugby in Dublin over the past year and is involved in setting up and publicising a new club in Antrim called the Ulster Warriors Wheelchair Rugby Club. This is set to launch in October. 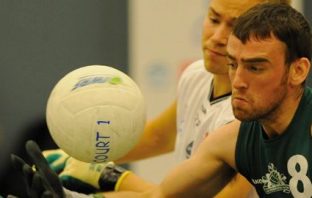 Wheelchair Rugby – getting it over the line
By Sean SmythJuly 30, 2012