You are at:Home»News & Current Affairs»POLITICS: BETWEEN A PROTOCOL and a HARD PLACE – By Brian Rowan
Social share:

In the political dramas of this place, NI Secretary Brandon Lewis will soon be centre stage.

The wider frame in this latest play stretches well beyond the Sea Border and the unionist trauma of this centenary year with all its frets and fears and foreboding about the Union.

A deadline – another deadline – on Irish language legislation has arrived.

Will Lewis now proceed, as promised, at Westminster, or will he hit the pause button?

Some suspect the latter.

In June, with politics here rushing towards another edge, the Secretary of State intervened.

He gave Stormont until the end of September to resolve this matter otherwise the government would take the legislation through the UK Parliament.

It would create an Office for Identity and Cultural Expression as well as Ulster Scots and Irish Language commissioners.

That moment has arrived, and already the question is being asked of Lewis. 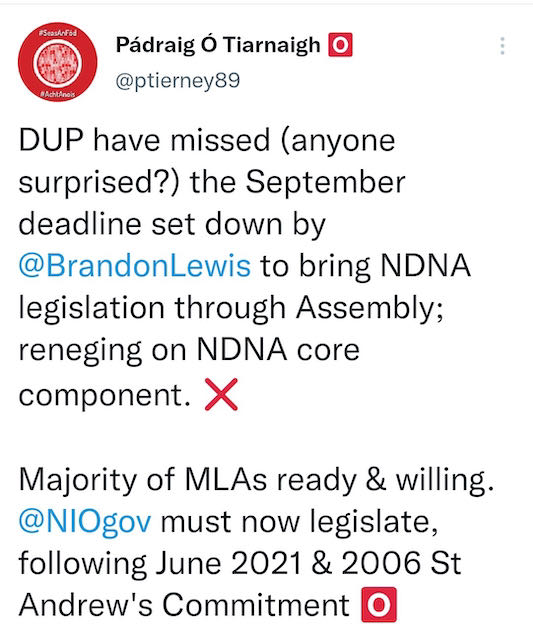 This is just one of a number of key decisions.

With widespread opposition to a legacy ‘amnesty’, will the UK Government push on and shape a process based on information-retrieval and reconciliation – minus prosecutions and prison?

The opposition to the plan has been loud, but one source commented: “We haven’t heard an alternative” – meaning a process that would be endorsed by the five main Stormont parties.

In an interview with BBC Political Editor Enda McClafferty on Friday, Prime Minister Boris Johnson spoke again of healing and reaching an understanding of what happened – drawing lines and moving on.

His words are in that frame of reconciliation and information – and, in the background, the suggestion is the government may well “crack on” with its proposals.

It will be a big call for ministers – one of many in a political autumn fraught with danger.

Johnson said: “We don’t want to deny anybody justice” – but what does that mean?

Could it be, to borrow words from a source, “trying to find justice in a different way” – in other words through a meaningful information process.

This government – this Prime Minister – is not trusted, not believed on this issue and on others.

McClafferty reminded Johnson that his fingerprints are all over the protocol, which he says will now have to be fixed or ditched – a protocol that is part and parcel of an unthinking Brexit and that EU exit that was Johnson’s highest priority.

More important than the Union.

Can this government be believed on any agreement?

All of this plays into the latest machinations and manoeuvres at Stormont – the DUP boycott of North/South meetings and the threat to the Executive whether on this issue or the Protocol or on Irish language legislation.

That is by no means certain. It is a call for the Secretary of State.

New measures as part of the New Decade New Approach agreement – allowing for more time to resolve differences in the event of a crisis at Stormont – are not yet in place.

Back in January 2017, when Martin McGuinness resigned as deputy First Minister, then Secretary of State James Brokenshire took just a week to announce an election date in March that year.

This time – if the Executive collapses – there is a view that Lewis would play things longer; that the “reasonable time” he has to decide on these matters could easily be stretched to the scheduled Assembly election date of May 2022.

I asked one of the DUP’s senior elected representatives if he thought there would be a 2021 election: “No, I don’t,” he replied – but he acknowledged the unpredictability of politics in the here-and-now.

Nothing is certain. There are too many moving parts.

Even if we get to May 2022, there is another question.

What if Sinn Fein becomes the largest party. Would unionists nominate a deputy First Minister?

“We’re not there yet,” one source commented.

He thought back to 2017 and the Assembly election in which unionists lost their overall majority at Stormont – and, then, thought of the Westminster election months later when the DUP won ten seats.

Might the fear of a Sinn Fein First Minister again energise the unionist vote – allowing the DUP to “move on swimmingly as largest party”?

A lot has happened in the four-plus years since the summer of 2017.

The European elections in which unionists lost their second seat.

Then, the Westminster election of 2019, viewed as a day of reckoning for the DUP over Brexit; and, of course, there is the  turmoil of this centenary year in which the party has had three leaders.

Stormont is holding on to a very thin thread.

Social share:
Previous ArticlePOLITICS ON A HIGH-WIRE WITH NO SAFETY NET – HELP! – By Brian Rowan
Next Article Breaking the mould – Beattie doing politics his way – By Brian Rowan