You are at:Home»News & Current Affairs»POLITICS ON A HIGH-WIRE WITH NO SAFETY NET – HELP! – By Brian Rowan
Social share:

Right now, politics here is performing another of those high-wire acts – with a blindfold and no safety net.

It is a walk that is taking Stormont towards another edge.

There is little room for wrong steps. Already, there have been too many of those.

For unionists, this NI Centenary year, has been a story of uncertainty –  the crossroads and nightmare I wrote about in my book Political Purgatory as we turned into 2021.

The post-Brexit reality is an Irish Sea Border – with not just the additional paperwork of trade, but something that asks a much bigger question about the Union itself.

Northern Ireland is a different place in the United Kingdom.

That penny has dropped, and, it is a reminder that politics is not just about what you want, but what comes with it.

Brexit was not thought through.

Not the promised land that was predicted and cheered and preached from platforms, but rather something that, to borrow a phrase, has left parts of the unionist/loyalist community “constitutionally unnerved”.

The only safety net unionists have is the UK Prime Minister Boris Johnson – the man who made the Brexit deal and who now wants to unpick it – or, more specifically, the parts of it that relate to this place.

There are so many dropped stitches in that net – and, in that high-wire walk to the edge, there may be nothing to catch Stormont if it falls.

Once more, there is talk of the ‘nuclear button’.

Sinn Fein pressed it in 2017 – collapsing the Stormont Executive and leaving politics in a kind of purgatory for three years.

Next time, if there is a next time, we might be condemned to ‘Political Hell’.

The focus is on the DUP and its new leader Sir Jeffrey Donaldson – the party’s third leader in this Centenary year.

In the row over the sea border, it is he who has put the future of Stormont on the line – warning again on Tuesday that the time for words is over. 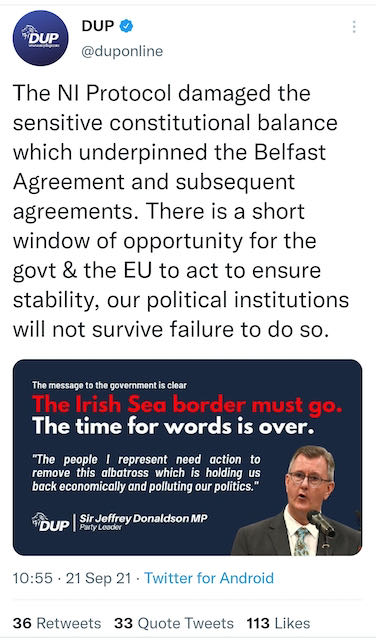 We are a million miles from the new hope and new day of the New Decade-New Approach agreement of January 2020 – that British-Irish initiative crafted by then British Secretary of State Julian Smith and Irish Foreign Minister Simon Coveney.

And we are back to many of the old arguments, including the Irish language, the shaping of some legacy process to answer the questions of the conflict years and, as the PSNI approaches its 20th anniversary, so, policing is once more in the political mix.

The politics of this place is back in the trenches. Old battles being fought again.

They are tired fights that are never won.

During the summer, the UK Government intervened in the standoff over Irish language legislation. If there was no progress at Stormont by September, then the issue would be moved at Westminster in October.

And here we are at the door of that deadline, with Donaldson warning of consequences if this happens with the sea border question unresolved.

If the DUP removes its ministers from the Executive, then we step closer to an election – or do we?

Will it really happen before  the scheduled May 2022 date? That is a call for Secretary of State Brandon Lewis, who has “reasonable time” to decide.

The winter and the pandemic may be reasons not to have an early election.

He could allow another of those standstill phases in politics here, give the parties space in which to talk. We know the routine and the elastic nature of deadlines – how time and patience get stretched.

There is , of course, another question.

Does it really matter to a fractured  unionist community – fighting with itself – whether the election happens in 2021 or 2022?

That moment, whenever it happens, might create the next scene in the centenary nightmare – the possibility of a Sinn Fein First Minister at Stormont.

Could unionists cope with such an outcome? Would Stormont – that place on the political hill overlooking Belfast – survive? Are we watching the unmeasured steps that are taking it ever-closer to its endgame?

Beyond the rows of now, these are the next big questions.

The political noise is sounding like some desperate cry for help in a moment when it might already be too late.

Has the damage been done in that unthinking Brexit play? How it started and how it might end are two very different story lines.

“Unionism needs a victory,” one source commented, in a conversation that also described a likely “collision course” within our politics – that fight between Union and Unity.

Can this place be talked out of its political corners before it becomes lost and trapped within them?