You are at:Home»News & Current Affairs»PEACE IS NOT CLEAN. IT CAN BE CRUEL – By Brian Rowan
Social share:

The legacy debate has now become the inevitable amnesty war – our past a story of deep trenches, political dead-ends and endless battles for information.

For years, we have been on this road to nowhere.

If implemented, they would close down many of the routes to ‘truth’. There would be a statute of limitations that would apply across the board – meaning no prosecutions and no prison.

That plan has been rejected by all the Stormont parties.

It is not easy to speak the word amnesty, or to argue for such. When you do, you walk on the eggshell of this small place and on top of it wounds and hurts.

For a long time, I have held the view that an amnesty is necessary if there is to be any chance of achieving a meaningful information-retrieval process.

If the possibility of jail remains a part of any excavation of the conflict years, then there will be silence.

As far back as 2008, I wrote the following: “Justice in the here-and-now of Northern Ireland, or the North, is not jail for those who were part of Ulster’s and Ireland’s war. The peace process has moved beyond that. And whether it is called amnesty or something less controversial, it is through a mechanism or process of that kind that truth will best be achieved. It will not be all of the truth, because some of it is far too ugly. Nor can it, or should it, be a process in which the “good” condemn the “bad”. The story of yesterday and yesteryear is much more complex.” 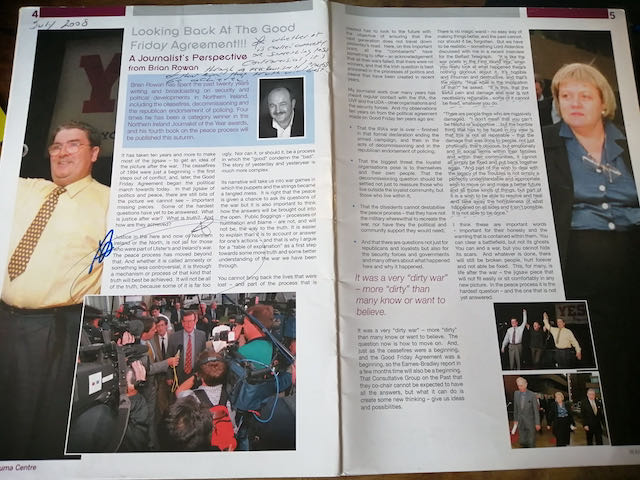 I was writing in the Newsletter of the WAVE Trauma Centre, a special edition of the magazine looking at progress beyond the tenth anniversary of the Good Friday Agreement.

I added this thought: “Public floggings – processes of humiliation and blame – are not, and will not be, the way to the truth.”

We were just months away from publication of the Eames/Bradley report and the first set of detailed proposals pointing to a possible way forward.

Other processes have followed – Haass/O’Sullivan, Fresh Start (which couldn’t agree a legacy deal) and the Stormont House Agreement – and still we wait, lost in the Past.

It is the Stormont House Agreement – with an Historical Investigations Unit, a Commission for information-retrieval, an oral history archive and a reconciliation element – that Sinn Fein is urging the UK Government to implement.

That agreement has long since become a disagreement; another dead-end that has long been in the reading of the tea-leaves.

Sinn Fein should take time out to think – to look in the mirror; to say something about the wounds and hurts inflicted by the IRA.

No one knows what that truth will look like. Will it offer anything more than broad strokes of regret?

The Past is about many corners, not just the hidden secrets of the British.

As for the loyalists, they are not even part of the conversation in terms of fine-detail discussions on how an information process might work.

None of what is on the table at this time, is a serious attempt at reconciliation.

The UK Government is attempting to create an escape route for military veterans and to shut down the ‘dirty war’. Their proposed amnesty has self-interest written all over it.

So, the Past continues to spin on this political roundabout – a conversation in circles; an endless dizzy play.

Denis Bradley – co-author of that Eames/Bradley report in 2009 – is right.

We need international help, a team with credibility and clout.

We need serious conversations with those who hold the answers to the conflict years and, if there is a commitment to a serious information process, then there should be an amnesty.

Sending a few more people to jail does nothing to address the Past.

You cannot have a peace process that releases prisoners and, then, a past process with the possibility of jail.

This issue should have been settled at the time of those early releases in that period 1998 through to 2000 – and the legacy issue given to an international team to shape a process.

In the here-and-now, the UK Government should put it proposals on hold and the latest sham talks on legacy should end.

In the thinking of many, amnesties are poisonous, but they are a  necessary part of those processes that think of ways out of conflict.

Peace is not clean. It can be cruel.

Social share:
Previous ArticleNIO Legacy Proposals: ‘Soft’ Options Will Not Suffice – By Dr Anna Bryson
Next Article ‘Top priority of any plan and strategy has to be that at the next Assembly election unionists designate as ‘united unionist coalition candidates’ – By David McNarry