You are at:Home»News & Current Affairs»UNIONISM AT WAR – the nightmare of 2021 – By Brian Rowan
Social share:

It turns out that Friday May 14 and that vote in the DUP leadership contest was only half-time – or the first leg in a two-match play.

The Edwin Poots goal was only just over the line; that narrow winning margin of 19-17 over Sir Jeffrey Donaldson now wiped out in the counter-coup of recent days.

In the page turns of 2021, we are reading the story of a unionist nightmare and crossroads.

Has there ever been so much political self-harm – so many own goals?

What was meant to be a celebration of this Northern Ireland centenary year, has, instead, become the very opposite.

Unionism at war with itself and some in loyalism rewriting the crisis statements of 1974 and 1985 as a bad situation is made worse.

This didn’t just happen. It is a story of a series of missteps and miscalculations – major blunders rather than mistakes.

– Unionism losing its overall majority in the Stormont chamber the following year;

– The inability to close and deliver on a draft agreement in 2018;

– Unionism losing its second seat in the European election of 2019;

– The day of reckoning for the DUP in the 2019 General Election when Westminster leader Nigel Dodds lost his seat. By now, the balance of power years (2017-19) over.

–  Then, the 2021 post-Brexit Irish Sea border, not just new trading arrangements, but something viewed in the unionist/loyalist community as a threat to the Union.

Politics is not just about what you want, but what comes with it.

“You have to know what happens next,” a senior loyalist commented.

It is a statement of the obvious – a statement that describes the lack of thinking and strategy that has created the script lines and scenes in this unionist horror show.

The latest standoff is not about concessions to Sinn Fein. It is about another agreement – this time New Decade, New Approach – which has not been implemented.

It is the agreement that saved Stormont in January 2020 – the joint-initiative involving then NI Secretary of State Julian Smith and Irish Foreign Minister Simon Coveney.

The Executive parties should be able to progress its detail. There should be no need for the UK Government to intervene, but there is – because there are those at Stormont who can’t and don’t do agreements.

The cultural package, including the Irish language legislation, was only brought to the desk of Secretary of State Brandon Lewis because Edwin Poots could not deliver it within the mandate of this Assembly.

That became clear in a meeting he held with Sinn Fein in Belfast City Hall on Saturday June 12; a meeting intended to flush him out on this question.

It brought the NI Secretary of State centre stage in this political play.

Overnight Wednesday into Thursday, the details of a new plan emerged from a series of meetings at Stormont House – the Northern Ireland Office headquarters.

If the New Decade, New Approach cultural package was not advanced by September, then it would be progressed at Westminster the following month and commissioners, including the Irish Language Commissioner would be in place by March 2022. (There are still questions about whether this can be done without the process becoming bogged down in The Executive Office).

This a consequence of Arlene Foster having been ousted as DUP leader. 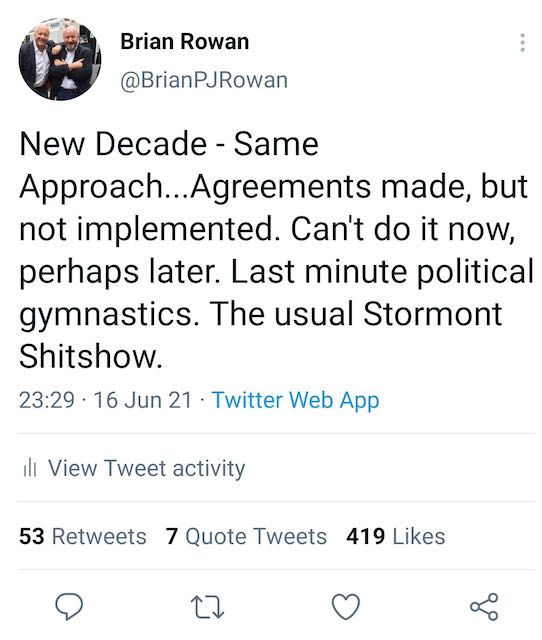 It was an accurate description.

Days earlier, a source had predicted a “revolt” if the UK Government intervened in the Irish language standoff and thought out loudly about whether Poots would then have to refuse to nominate Paul Givan as First Minister.

Poots did nominate Givan, but he did not have the support of his party to do so. He was hopelessly outnumbered.

It was a last roll of the dice. Within hours, the DUP roof had caved in. Poots had announced his resignation. Givan will have little time as First Minister.

This new leadership did not last long.

In terms of mood and tone, an internal DUP meeting, before that nomination, was described to me as both “appalling” and “dreadful”.

It became the counter-coup – a push against Poots.

So, we have had another week when everything changed, but nothing really changed.

The same standoff is waiting on the next leader – most likely Westminster leader Sir Jeffrey Donaldson. We will know by this time next week.

Poots was removed because of that UK Government intervention and the linked First Minister nomination.

How does the next DUP leader create circumstances in which a new nomination for First Minister is possible. It will mean another negotiation and questions again about whether Stormont will stand or fall.

A statement from loyalist leaders on Friday, included this sentence: “The new DUP leader must stop the constant flow of concessions to Sinn Fein even if that means suspending the normal operation of devolution.”

That statement, from the Loyalist Communities Council (LCC), said Irish Government ministers and officials are no longer welcome in Northern Ireland.

“That sounds more like the CLMC (Combined Loyalist Military Command) than the LCC,” one source commented – a reference to a statement written in the ink of the conflict period rather than the peace process. 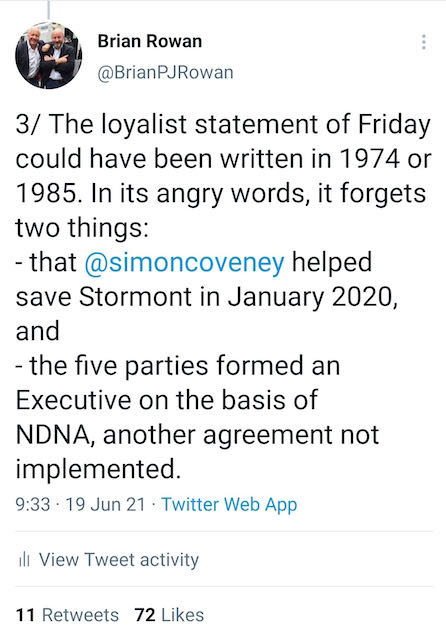 There are those who think an Assembly election in 2021 would be better for unionism – fought on fears for the Union, fears of a border poll, fears of Michelle O’Neill becoming First Minister.

Might such an election, with unionism in such disarray, be the next misstep and miscalculation?

It could well be.

If Sinn Fein emerges as the largest party, would unionists nominate a deputy First Minister?

This is what I mean, when I talk about Stormont being half a step from blowing its last chance.

The centenary has not been a celebration; that convulsion inside the DUP a few days ago adding to the nightmare year.

A new leader will only make a difference if there is a new approach in this new decade.

What are the chances of that?

Social share:
Previous ArticleSTORMONT: On another walk to its very edge – By Brian Rowan
Next Article NIO Legacy Bill: A Blueprint for Burying the Truth and Impunity for Veterans? by Daniel Holder