You are at:Home»News & Current Affairs»THERE IS NOTHING CERTAIN IN THE POLITICS OF NOW – an hour is a very long time – By Brian Rowan
Social share:

The politics of this place is in another of those waiting rooms – this time waiting on Sir Jeffrey Donaldson the latest and third DUP leader of this centenary year in Northern Ireland, following Arlene Foster and Edwin Poots.

In the waiting there are a number of key questions.

What is Sir Jeffrey’s path from Westminster to Stormont where he wants to be First Minister?

It is either through filling a vacant seat or waiting for an election. The next scheduled Stormont poll is not until May next year, but there has been plenty of talk that it could be earlier – possibly in the autumn.

It would also mean a Westminster by-election in Donaldson’s Lagan Valley constituency.

Another question is whether the DUP would emerge as the largest party in an Assembly election.

Could Sinn Fein and Michelle O’Neill take that seat in the Executive Office, and, if so, would unionists nominate a deputy First Minister?

It is on these questions that the future of Stormont hangs.

This incredible year of 2021 has, once more, put that place at its very edge. 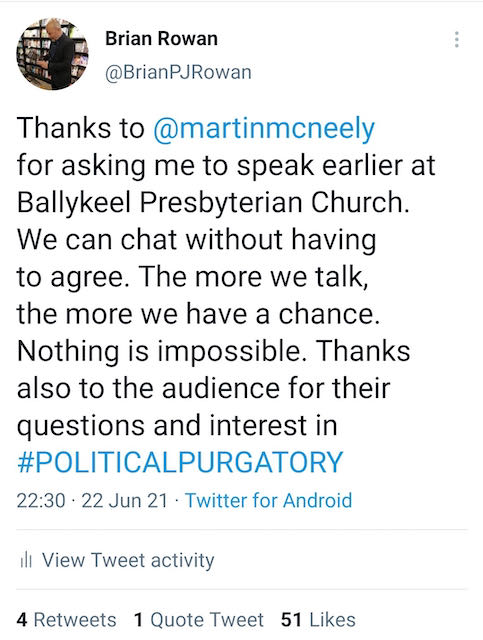 On Tuesday evening, at an event in Ballykeel in Ballymena – facilitated by the local Presbyterian Minister Martin McNeely – I was asked, what does Jeffrey do now?

He needs time, and he can’t do what Edwin Poots did last week; can’t ignore the mood of his party.

The Poots decision to nominate Paul Givan as First Minister, just hours after Secretary of State Brandon Lewis had agreed to move Irish language legislation at Westminster in October if the issue had not been sorted at Stormont by September, was the cause of the latest convulsion inside the DUP.

In this moment of uncertainty – not just inside that party, but across the wider unionist/loyalist community – it was a step too far; a political banana skin on which Poots fell.

The story of 2021 emerges from a lack of strategy – not knowing what happens next.

It begins in the blind-alley of Brexit five years ago and ends in the Boris “betrayal” and the Irish Sea border that has become a constitutional nightmare; this fear about the future of the Union.

In this moment, the Irish language question becomes even more difficult as unionists fear some further undermining of their Britishness.

One of the DUP’s senior elected representatives, a Donaldson supporter, described many “moving parts” in the here-and-now.

“There’s no point setting a timetable into which you’ve to put the moving parts,” he said.

He means, that firstly, the issues – most importantly the question of the Protocol and the sea border – have to be addressed and then you work out or choreograph the next steps and timetable. Not the other way round.

In this scenario, Paul Givan could remain as First Minister through the summer recess – those weeks stretching from pre-Twelfth to early September.

To take him out of that office now would set the clock ticking towards another crisis point – the last thing the DUP needs at this time.

What I am hearing is a thinking out of a possible route. No more than that. There is nothing certain in the politics of now, in which an hour is a very long time.

Donaldson needs a win to change the mood, but how does he get it?

On Wednesday in Belfast, Sinn Fein President Mary Lou McDonald spoke of Acht na Gaelige and the wider language and culture package being concluded with legislation coming forward at Westminster in October followed by the appointment of language commissioners.

There is no mood in Sinn Fein for another renegotiation of agreements already made and waiting to be implemented. That would be a road to nowhere.

In Ballykeel on Tuesday, with an audience of church and local community representatives – I spoke about the anger and blame that is the story of now and set out the path to this point.

The Brexit project, unionists losing their overall majority in the Stormont chamber, the last-minute panic that meant the draft agreement of 2018 fell, the day of reckoning in the 2019 General Election and the reality of the sea border in this centenary year.

I said much of this resulted from political self-harm, and in terms of blame the first conversation should be in the mirror.

There is no point in cosy conversations. Talking doesn’t mean you agree, but, in dialogue, there is at least a chance.

I also reminded the audience that Irish Foreign Minister Simon Coveney helped save Stormont in January 2020, and said that violence or the threat of violence will change nothing.

I borrowed a line from the senior police officer Una Jennings – “be careful the stories you tell yourself”.

In the waiting for the next steps, Donaldson has a lot of thinking to do.

His decisions will determine whether Stormont stands or falls.

Social share:
Previous ArticleNIO Legacy Bill: A Blueprint for Burying the Truth and Impunity for Veterans? by Daniel Holder
Next Article Strong medicine for Unionist leaders – By Dave Maley