You are at:Home»News & Current Affairs»STORMONT: On another walk to its very edge – By Brian Rowan
Social share:

Belfast City Hall doesn’t do quiet or private political meetings, not even on a weekend.

It is a place that talks.

Last Saturday, new DUP leader Edwin Poots was in the building with Paul Givan and adviser Philip Weir. There for a meeting scheduled for 10.30.

Stormont politics is on another of those walks to the edge. The outcome of that City Hall meeting, that stretched through lunchtime, has quickened the pace along that path. Where will it end?

On Saturday, the two delegations met in the Sinn Fein party offices.

Politics is in a period of transition; its destination not yet known.

For now, there is a description of a “complete impasse”, and, again, we are half a step from another crisis – perhaps closer than we think to Stormont blowing its last chance.

It is a familiar place in our politics; another standoff over agreements made but not yet implemented.

The issue, once again, is Irish language legislation. The question, whether new DUP leader Poots can deliver and, more importantly, when.

He was one of the lead players in that recent coup that removed Arlene Foster as leader and First Minister. Poots does not want the top post at Stormont. Givan – his MLA colleague in Lagan Valley – is his choice.

In the way the Executive functions, Sinn Fein has to nominate a deputy First Minister and, without clear commitments on a timetable for Irish language legislation (specifically within this Stormont mandate), that won’t happen.

The BBC political correspondent Gareth Gordon reported this response from the DUP: “No one would forgive Sinn Fein for playing fast and loose with people’s lives in Northern Ireland. The DUP leadership stands resolute to enter government, respect power sharing and get on with the job. It is up to others to follow. We remain committed to the New Decade New Approach agreement and want to see it implemented in all its parts.”

That Saturday meeting in the City Hall had not gone well.

There is always a build-up to these moments.

At the end of May, a date was floated – that for Irish language legislation to be delivered within this mandate, the process has to begin by June 24.

Then, on June 6, there was a blog by Declan Kearney listing broken agreements. It took us back to 2013 when the planned  Maze/Long Kesh Peace Centre crumbled in a backlash inside the unionist/loyalist community.

In terse words, Kearney wrote: “All the negotiations are concluded. The new DUP leadership should not make the mistake of overplaying its hand again.”

In the build-up to the collapse of Stormont in 2017, a source had spoken of a momentum in the language “that could take us over the edge”.

The Kearney blog reminded me of those words.

Is there a way out of this corner? We now hear the argument that the Irish language legislation should be moved through Westminster.

This was the message in a statement from Sinn Fein President Mary Lou McDonald after meeting with NI Secretary Brandon Lewis on Monday. 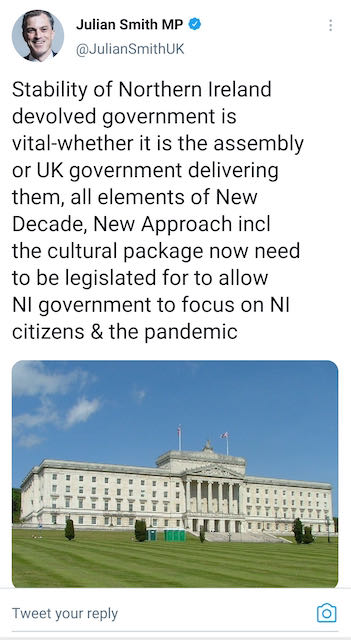 There had been an earlier tweet from former NI Secretary of State Julian Smith, the joint architect with Simon Coveney of that New Decade, New Approach agreement that saved Stormont in January 2020.

Others think it is a bad idea for the UK Government to step in, including a DUP source, who said any such move would be “preposterous” and would remove any semblance of the ability of the DUP and Sinn Fein to work together at Stormont.

This source voted against Poots in the party leadership contest.

Another source – inside the loyalist community – said any such move by the UK Government would undermine Stormont: “You’ve taken another block out of the devolution wall.”

He said there would be a “revolt” and thought out loudly about whether Poots would then have to refuse to nominate Paul Givan as First Minister.

In the mess of the moment, there are no good options. We are in another of those moods that forced then First Minister Peter Robinson to step back from the Maze/Long Kesh project in 2013.

In this centenary year, the post-Brexit Irish Sea border has caused an earthquake within parts of the unionist/loyalist community. Now, this latest fight on Irish language.

At Stormont, the clock is ticking and there’s not much time.

Social share:
Previous ArticlePOOTS v DONALDSON: What do the rules say about a tie?  – By Brian Rowan
Next Article UNIONISM AT WAR – the nightmare of 2021 – By Brian Rowan