You are at:Home»News & Current Affairs»POOTS v DONALDSON: What do the rules say about a tie?  – By Brian Rowan
Social share:

As the DUP moves closer to its decision day, that opening thought is from one source explaining and emphasising how “tight” he thinks this contest has become – so close, indeed, that it could come down to “a vote either way” – how 18-18 becomes 19-17.

If it is that tight, then the recent prediction of the BBC Political Editor Enda McClafferty of “a border down the middle of the DUP” will have been a perfect description of this battle.

‘Tight’ is the new word, even from one source, who at one time, was predicting a runaway win for the Executive Minister Edwin Poots – that victory was his “all day long”.

This was before Westminster leader and MP Sir Jeffrey Donaldson entered the race. In politics, these things are rarely decided by an early sprint – more the measured pace of marathon running.

As the gap has narrowed, so the speculation gets louder. Could Poots and Donaldson come to some arrangement/agreement to prevent such a public split?

One source thinks it is too late for that. He doesn’t know who could broker such a deal – that there is nobody at headquarters who could bring that together – not Arlene [Foster], not Nigel [Dodds] and not Timmy [Johnston, the party chief executive].

“I think it [the vote] will be played out on Friday,” my source commented.

If he is right, then, this is down to the wire.

This centenary year has brought unionism to its next crossroads – the blind-alley of Brexit the place in which much of the damage was done.

There have been many days of reckoning since – including electorally.

In the words of one observer, the electorate is in disarray, as are the parties.

Arlene Foster’s fall as DUP leader and First Minister is part of the blame game.

In the here-and-now, the Irish Sea border and fears for the Union are what have caused this turmoil and tremor within unionism.

With talk of an early election, so the pace of events has quickened…

Steve Aiken’s exit from the leadership of the Ulster Unionist Party was carefully choreographed – less brutal than the very public push against Arlene Foster inside the DUP – but no less inevitable.

He will have known his short time as leader was up.

At a recent virtual meeting of the party Executive (not the meeting on Tuesday evening to decide the next steps in the leadership contest), there was a different sequence of events.

His car crash interview on the Nolan Show had been the talk of both politics and our wider place.

Why had he called on Chief Constable Simon Byrne to resign?

In an excruciating stretch of minutes and words – there was little by way of explanation.

According to one source, Aiken knew he had  “cocked up” and apologised.

At that virtual Executive meeting, he bought himself some time, but it only postponed things.

It was becoming obvious that he had lost the MLA group at Stormont, the party officers and council leaders.

His news conference confirming his decision to step down as leader was at Parliament Buildings on Monday.

On this occasion, Aiken found the right words – the right balance; describing the decision to nominate Robin Swann as Health Minister in the restored Executive of January 2020, when others avoided it, as an example of ‘Country’ over ‘Party’. 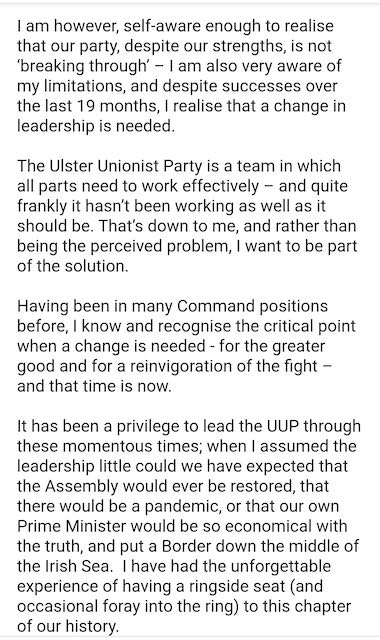 On Wednesday evening MLA Robbie Butler confirmed he will not run in this leadership race and endorsed Justice spokesperson Doug Beattie, who is favourite to follow in that line of Trimble, Empey, Elliott, Nesbitt, Swann and Aiken.

In his statement on Monday, Aiken referenced that post-Brexit Irish Sea border.

His party recognised the danger as far back as October 2019 – a concern not just about the additional paperwork of trade – but something much bigger. A  threat to the Union itself.

Those fears were outlined in a long-sequence of statements 17 months ago.

Inside the Ulster Unionist Party, their eyes were wide open.

As soon as the party leadership questions are answered, then, these internal plays will stretch into our wider politics.

That talk of an early election has not gone away – it is loudest in conversations outside the unionist parties, heard in the wider unionist/loyalist community.

The thinking is that the Executive should be collapsed and an election fought on fears for the Union, fears of a border poll and fears of a Sinn Fein First Minister –  this could energise the unionist vote.

A “risky strategy”, was how one veteran unionist politician described it, while another source spoke of “strong rationale” for such a move.

The story of 2021, is of politics and parties turned upside down.

Social share:
Previous ArticleA refusal by the new DUP leader to appoint a First Minister may be a necessary price to pay to get rid of the Northern Ireland Protocol – By David McNarry
Next Article STORMONT: On another walk to its very edge – By Brian Rowan