You are at:Home»News & Current Affairs»CENTENARY CRISIS – AND PERHAPS A ‘CROCODILE 2’ MOMENT – By Brian Rowan
Social share:

In politics, it is not over until it’s over.

It has been a week of headlines. The push against Arlene Foster and her resignation statement with a timeline for stepping down.

She walked the plank as news emerged of how she had lost the confidence of too many of the DUP’s elected representatives – at Stormont and Westminster.

THOSE HEADLINES WILL SOON BE OLD NEWS

Executive Minister Edwin Poots was quick to declare his candidacy for the party leadership, and the early momentum is clearly with him, including in a series of public statements of support from elected representatives at Stormont and Westminster. 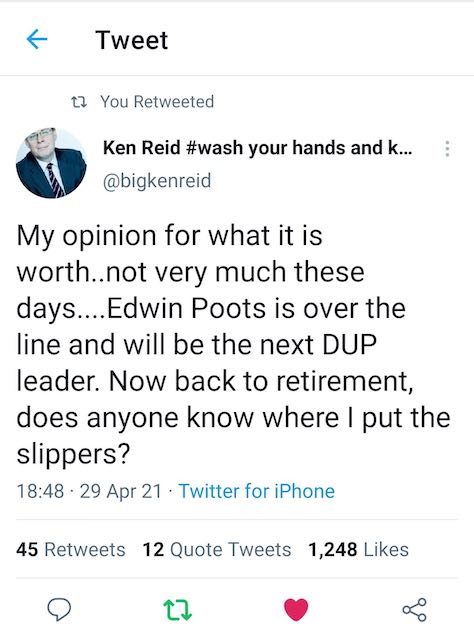 Poots is the public stage aspect of this political drama.

Behind the scenes, a conversation continues about an alternative and whether Sir Jeffrey Donaldson will join the race, with something expected to be said the farside of this weekend.

It is about assessing numbers – a calculation about chances.

If he runs, then, I am told, he would have the support of a number of MPs and the majority of the party’s ministerial team at Stormont; but it is the MLA group there – representing 27 votes – that will decide any contest.

More than twenty of them expressed no confidence in Foster, but I am told it would be a “mistake/miscalculation” to translate all of that number into support for Poots.

Another part of the story is about those who didn’t sign that letter of no confidence – particularly several of the Westminster MPs.

So, there are assessments and calculations yet to be made.

More interesting – more important – is how this very public falling out within the DUP will play into the wider politics of this place. 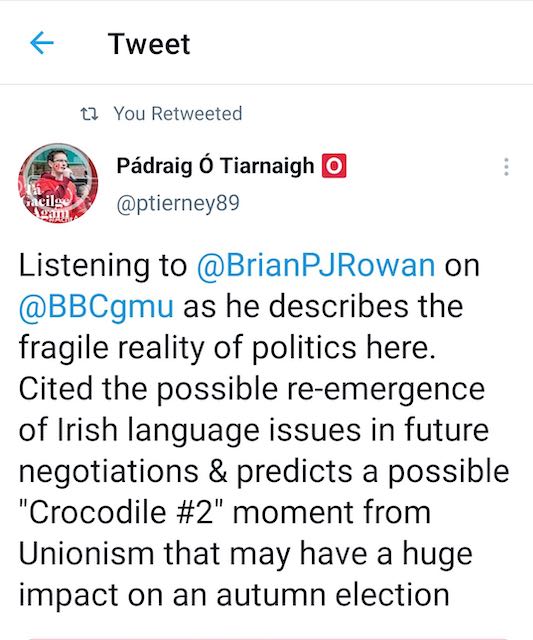 For some weeks now there has been talk of the pandemic being the thread by which the Executive hangs – this, a little over a year, after the political institutions were rescued in that joint-mission involving then Secretary of State Julian Smith and Tanaiste Simon Coveney. 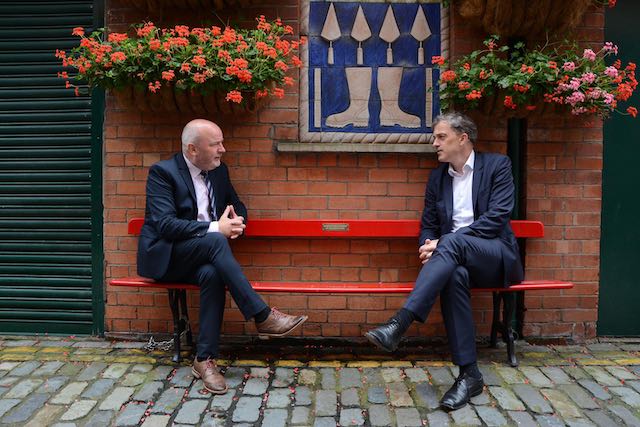 The possibility of the Executive collapsing, an early election and another negotiation have become a louder part of the political conversation.

It is not just about what is happening inside the DUP, but something that reads across into the wider unionist/loyalist frame.

The DUP has been pushed by that wider mood and expectation.

Key to what happens next are the talks involving the UK Government and EU on the Protocol and Irish Sea border.

For unionists and loyalists this is about the Union, not some easements or tweaks in relation to the paperwork of trade.

THIS IS THE REAL CRISIS…

and what might lead to the Executive falling and an early election fought on fears about the Union, a border poll and the possibility of a Sinn Fein First Minister.

All of this would be intended to energise the unionist community and vote.

On radio, earlier this week, I discussed the other side of that coin – that this unionist plan could create a ‘crocodile 2’ type moment.

Remember in the 2017 Assembly election campaign, when in the battle for an Irish Language Act, Arlene Foster likened Sinn Fein to a crocodile – that if you feed it, it will keep coming back for more.

In the fallout, unionists lost their overall majority in the Stormont chamber.

If the DUP collapses the Executive on the sea border and opens up old fights such as Irish language legislation, then it could also energise the nationalist/republican vote.

Sinn Fein will not block the appointment of a new DUP leader as First Minister, nor will the parties facilitate a DUP collapse of the Executive.

If the DUP wants to bring it down, then it will be its choice and action.

In all of the words and calculations about what could happen next, there is a bottom line.

Stormont will only function if there is a working partnership involving the DUP and Sinn Fein, which means the implementation of the New Decade, New Approach agreement, including Irish language legislation.

This is not on the table for re-negotiation.

Stepping back from the Good Friday Agreement, and other subsequent agreements, may be the mood among unionists/loyalists.

For others, the next conversation is about a ‘New Ireland’.

In 2021, in this centenary year, this is the next crossroads.

Social share:
Previous ArticleThe ‘mass grave’ and the ‘New Ireland’ – thinking beyond the Good Friday Agreement – By Brian Rowan
Next Article A refusal by the new DUP leader to appoint a First Minister may be a necessary price to pay to get rid of the Northern Ireland Protocol – By David McNarry