You are at:Home»News & Current Affairs»STORMONT: When a week is a very long time in politics – By Brian Rowan
Social share:

It was breakfast time on Friday – the morning after the Executive meeting the night before and still no Stormont minister had been seen or heard in a radio or television interview.

Those opening three words were spoken by a senior politician; not angered by the decision to introduce a new ‘circuit breaker’ of restrictions by November 27th, but by the absence of explanation on news output.

“It is pathetic,” the politician added.

At 19.52 on Thursday, a text message pinged on my phone: “It’s done. Got the result.” Then, two minutes later, another text: “Agreement on a new circuit breaker.”

I got confirmation from a second source, and, then, tweeted that news at 20.06.

Thursday was one of those fascinating days in our politics; something had happened and was happening inside the DUP – the party that on this day a week previously had twice used a blocking mechanism or veto against 4-party support for a health paper seeking a further extension of restrictions designed to push back the virus.

Alongside the health crisis, there was a developing political crisis inside the Executive.

A week later, had that penny dropped inside the DUP? Did they understand they were on the wrong side of both lines?

Before the Executive meeting on Thursday November 19th, MPs Sir Jeffrey Donaldson and Gavin Robinson were on radio and television.

Hours before Health Minister Robin Swann would bring his latest proposals for further restrictions to the Executive, we were hearing a different tone and message from those quieter voices inside the DUP.

“I noted those contributions and wondered if that indicated something,” one Executive source commented.

By 16.00 that afternoon that same source was beginning to form an opinion of a change of stance in the DUP position.

Things had now moved beyond signalling and messaging into the detail and substance of a new set of restrictions.

The Executive had met and adjourned: “I wouldn’t have put the house on it [a deal]at that stage,” my source continued.

There was concern about what might happen in the interval. What wider conversations would happen inside the DUP. Would they come back to “trade on the science”.

These were the concerns around 17.00 on Thursday.

“It was only when they came back that I became convinced that they had crossed the line,” my source commented. “They had worked out the contours of their position.”

None of this is easy or straightforward.

The economy minister Diane Dodds had concerns – so, also Edwin Poots, his opposition to the latest restrictions made clear in email correspondence on Friday evening, which included: “The failure of the health department will inevitably lead to the failure of the economy.”

The Ulster Unionists accused Poots of “performing his own twisted version of the blame game.”

At teatime on Friday, there was a tweet from MP Sammy Wilson: 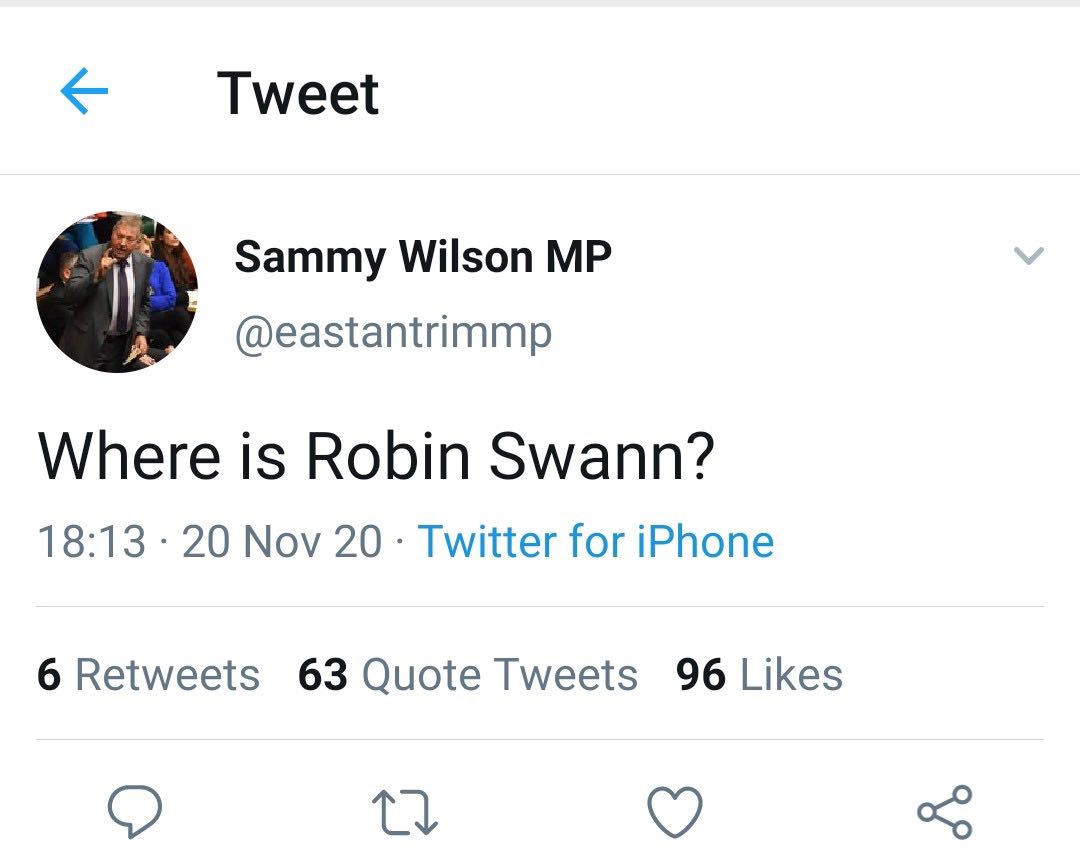 At that time, Swann was appearing on both Ulster Television and BBC news programmes.

We now know that Thursday was a choreographed day. The Donaldson and Robinson interviews preparing the ground for what then happened inside the Executive.

“I know that Timothy Johnston [the DUP Chief Executive]has become much more assertive on political direction,” one source commented.

This is another thought in the working out of what happened last week – just one source’s reading between the DUP lines.

The outworking of all of this, meant a DUP somersault dressed up in talk of new information.

Expert advice has been the same for weeks on the need for restrictions and “the longer, the harder, the better”.

The Executive’s decision this week has bought some time for the hospitals and for Stormont politics, but less than a year on from the New Decade New Approach Agreement, there are concerns about the future of Stormont – about whether it can last beyond the pandemic.

In recent weeks, I have heard that opinion expressed both by senior unionist and nationalist politicians.

“And who knows?” an Executive source commented.

Those few words developed into this wider analysis – that if you cannot get unanimity and commonground on an issue of public health, then the narrower the ground on other issues; issues of public policy and on other big questions such as Brexit, legacy and the Northern Ireland Centenary, when the debate over Unity and Union will only get louder.

If you “can’t cut it on public health”, how much more difficult do these other things become?

This is the next question and those corners turning into those difficult issues are not far away.

The cracks are obvious. Politics looked close to broken in the past week. Inside the DUP, someone recognised the immediate dangers just in time.

Social share:
Previous ArticlePOLITICS ON THE PARALLEL BARS TRYING NOT TO FALL – By Brian Rowan
Next Article Legacy Talks in plain sight – but no one was looking – By Brian Rowan