You are at:Home»News & Current Affairs»‘HOW TO SAVE THE EXECUTIVE WHEN THE KAMIKAZES ARE FLYING THE PLANES?’ – By Brian Rowan
Social share:

The Executive is in obvious trouble – the question: how close is it to the political edge?

Here we are again, asking that question, less than a year after the New Decade New Approach Agreement restored government at Stormont after an absence of three years.

Some weeks ago, a senior unionist politician told me: “I think the Executive is on sticky ground. If we didn’t have Covid, it wouldn’t last.”

On Tuesday, another unionist commented: “Last week was the worst week. I don’t think the DUP know how close to the edge they’ve pushed it. Relationships have been almost broken.”

Four of the Executive’s five parties twice supported papers and proposals from the Health Department to extend the Covid restrictions – Sinn Fein, the SDLP, the Ulster Unionist Party and Alliance.

Twice the DUP used its veto to block that path.

Would it do so again?

On Tuesday, MP Sammy Wilson and the First Minister Arlene Foster did not rule that out.

This is not some Orange versus Green scrap.

The compromise reached last Thursday 12 November, is only fully supported by the DUP.

This was a battle – and not the end of things. A unionist war-of-words  continues: 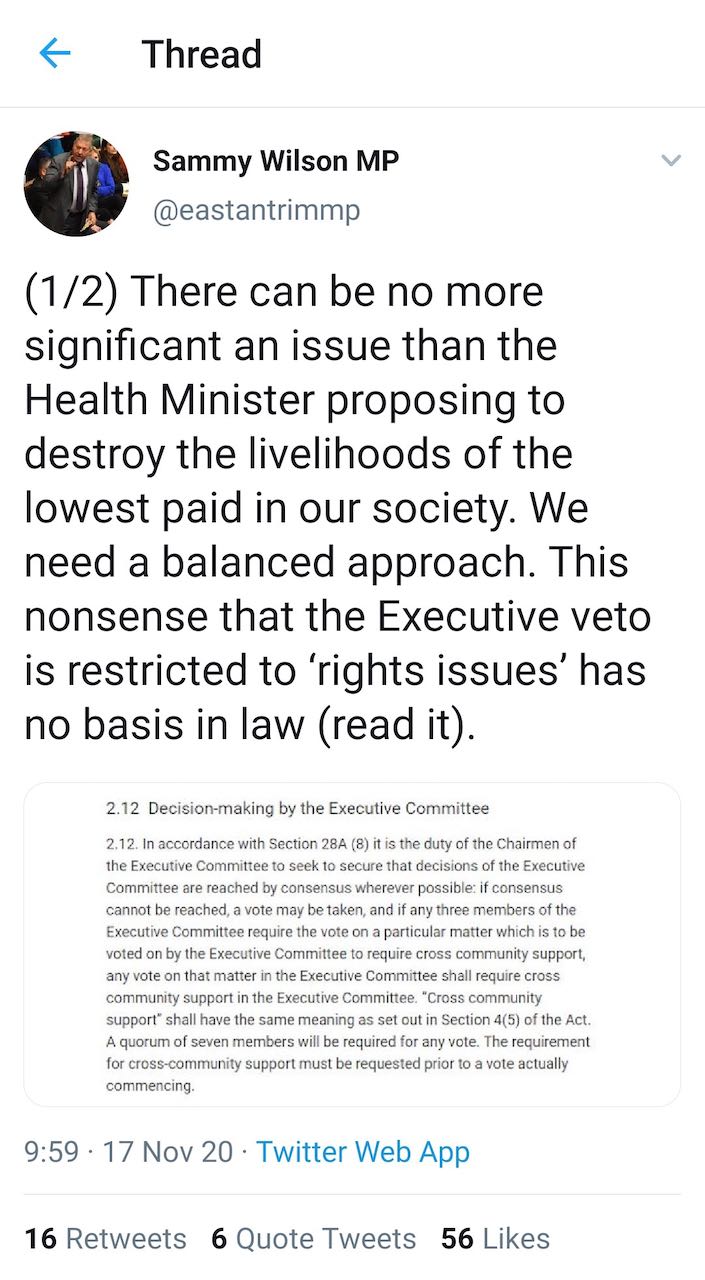 Back in January, before the pandemic came racing at us, Health was set as an Executive priority in the New Decade New Approach Agreement.

Two days later, in the formation of the Executive, it was the second last pick.

Robin Swann stepped up as others walked away with other portfolios.

In all the noise of now, that is worth remembering.

One observer, watching this fallout, described last week’s compromise as “a sticking plaster that is going to fall off”, and worried out loudly that “there’s not another fudge available”.

His question: “How to save the Executive when the kamikazes are flying the planes?”

Another source added: “I do think it’s fragile.”

There are reasons, of course, why the Executive will survive.

Would unionists really want a broken Stormont in the period of the Northern Ireland Centenary?

Would any party walk from the Executive in the course of a pandemic?

Then, there is another question: For how much longer can four parties allow one to reduce expert health advice to a negotiation?

The answer to that question is the edge – how near or how far away we are
from the next political crisis.

Social share:
Previous ArticleANOTHER STORMONT NIGHTMARE – the politics of pandemic – By Brian Rowan
Next Article POLITICS ON THE PARALLEL BARS TRYING NOT TO FALL – By Brian Rowan