‘First clean the inside of the cup and dish and then the outside will also be clean.’ (Matthew Chapter 23 Verse 25)

The wording, in this case from the Living Bible, may alter, dependent upon the version from which it is taken, but the metaphorical significance for Northern Ireland and the process which flows from the Good Friday and subsequent agreements, remains constant.

The political character of the funeral of republican veteran, the late Bobby Storey, and the dismissive consideration given to the health implications of ignoring official and consensual guidelines have drawn wide and mostly disapproving comment across the media. With no justifiable reasons for ignoring pandemic good practice and guidance, observers can only judge the actions which bear the past hallmark of calculated provocation and contradict the political rhetoric and denial that followed. These pave the way back to old quarrels and accentuate the boundaries still existing in the minds of some political parties and leaders. Continuously singular emphasis on process without adhering to the spirit of consensus and compromise to create a strong economy, equality, justice, respect and parity of esteem for all is to abandon what the referendums of 1998 mandated. The outcome did not solve all problems but it is the only place to seek solutions and delivery of these have been too much delayed by politics which carry undue emphasis on emblems, pageantry, selective remembering and symbols. These were much on display in West Belfast.

Writing recently in the Irish Times, Senator Michael McDowell, former Attorney General and Tánaiste in the Oireachtas, drawing on his years of discourse with Sinn Fein concludes that conduct of the funeral is evidence that the old structure of power and decision-making has not gone away; that Sinn Fein continues to operate as a ‘state within a state’ in pursuit of ideological supremacy. 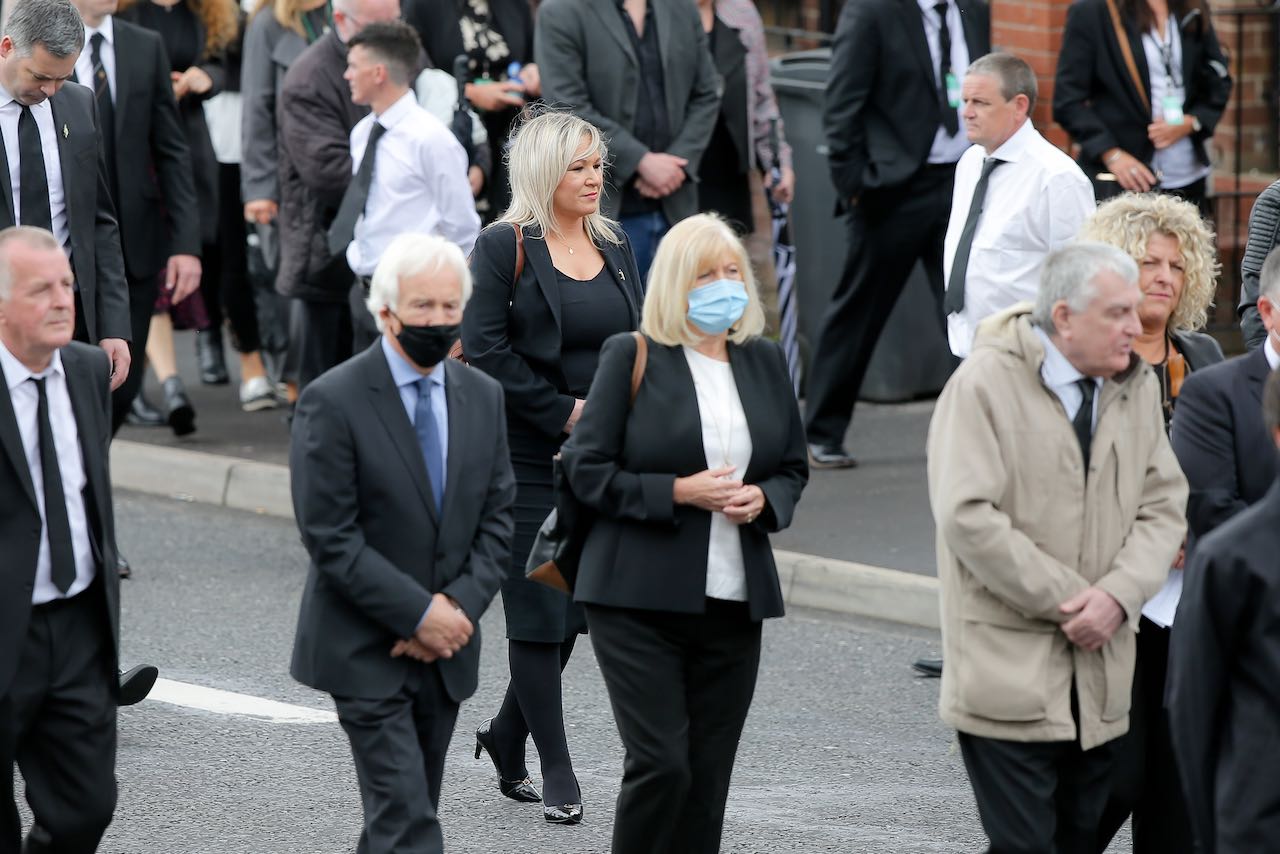 This is out of kilter with the social needs of the time and exposes the thinking behind it as stale and lacking in modernity. A community is what it does. It appears that political republicanism cannot mature beyond wanting to force convergence to its inertia. Its seeming addiction to corrosive strategizing, to conspiring as opposed to inspiring, is putting politics on a collision course with the uncertain challenges of the Covid-19 health, economic and social crisis. The growth of peace and democracy does not yet appear to be deep-rooted.

The reaction of political unionism has been predictable but, even with a way to travel, has maybe begun to address the credibility deficit within large swathes of the electorate. With the exception of some notably angry individuals playing to their base the response has been constructive and shown a measure of civility. There has been no reference to crocodiles and the lessons of Drumcree and Twaddell appear to have been learned.

Politics are not played to fixed rules and In Northern Ireland working towards consensus can be messy. On this occasion, the political leadership of Unionism, and in fairness that of other parties, has to be commended.

It is mainly political unionism which speaks to those who have opted to ignore the lessons emerging from Leicester, Bradford and several of the United States of America to take advantage of lockdown easing and organise outdoor activities to celebrate the Twelfth of July.

Local leaders promised contingency planning but it was always a calculated risk given the passions which they can evoke and the unseemly sectarian behaviour evident, not least, in the displays of bigotry at some bonfires.

There can never be cast-iron guarantee that there will be no breaches of the guidance aimed at protecting those who are still shielding, those recovering from Covid-19 and a wider community within which the virus is still active and wherein many still await delayed appointments for different medical conditions. Risk of further delays and growing waiting lists are not needed. Regrettably these emerged on the day.

The leadership of the Orange Order, the First Minister, the Minister of Health and Steve Aiken MLA leader of the Ulster Unionist party is welcome. They all appealed to good sense and urged that this should prevail.

It is also noticeable however that there has been a strategic and obvious appeal to communal loyalty and allegiance to not adhere to the lowering of standards on display elsewhere; to not let the side down.

Such is the game we play.

Where will we be when the robust defence of the indefensible and the ineffectiveness of partisan calls for the resignation of the Deputy First Minister ends? Where will we be when questionable loyalty to cultural expression in the midst of a pandemic has run its course.?

It seems we will be supping from a cup and dish not yet entirely cleansed.

Social share:
Previous ArticleSupremacism has to be defeated – By Colm Dore
Next Article Is a referee the answer to DUP Sinn Féin squabbling in Parliament Buildings? – By David McNarry