You are at:Home»News & Current Affairs»Coronavirus»STORMONT ROW – “THIS WAS A HIT JOB BY SINN FEIN” – By Brian Rowan
Social share:

That opening thought comes from a unionist source, and is a reference to Michelle O’Neill’s public criticism of Health Minister Robin Swann and his department in a BBC interview with Mark Carruthers last Thursday.

The deputy first minister said, “slavishly following the Boris Johnson model, which has been too slow to act, has meant that we’re not as prepared as we could be at this moment in time”.

The comments were made with the peak in this first phase of Coronavirus expected soon.

There were tweets within the hour, signalling that First Minister Arlene Foster would be on the Good Morning Ulster programme the following morning.

The Executive would also meet on Friday, and some expected an escalation – some further fallout from that Thursday interview on ‘The View’.

It did not happen.

Arlene Foster made clear that she has confidence in Robin Swann and, in measured words and sentences, said nothing to exacerbate or add to a bad situation.

“I think that set a tone when Arlene didn’t lose the rag,” a source commented.

Hours later, the Executive met – no cross words, no sparks flying; nothing explosive.

One source described it as “dull”; not meaning boring, but focused on questions and answers and detail and on getting clarity on personal protection equipment and testing.

“We got what we all were asking for – detailed information from the Department of Health,” one source commented. “That was resolved on Friday when we finally got tables…papers tabled on Friday which allowed us to see what he [Robin Swann] has been seeing.”

One source summarised that information in these words: “Plenty of everything, except masks.”

The Health Minister shared some of that detail in a news conference afterwards. 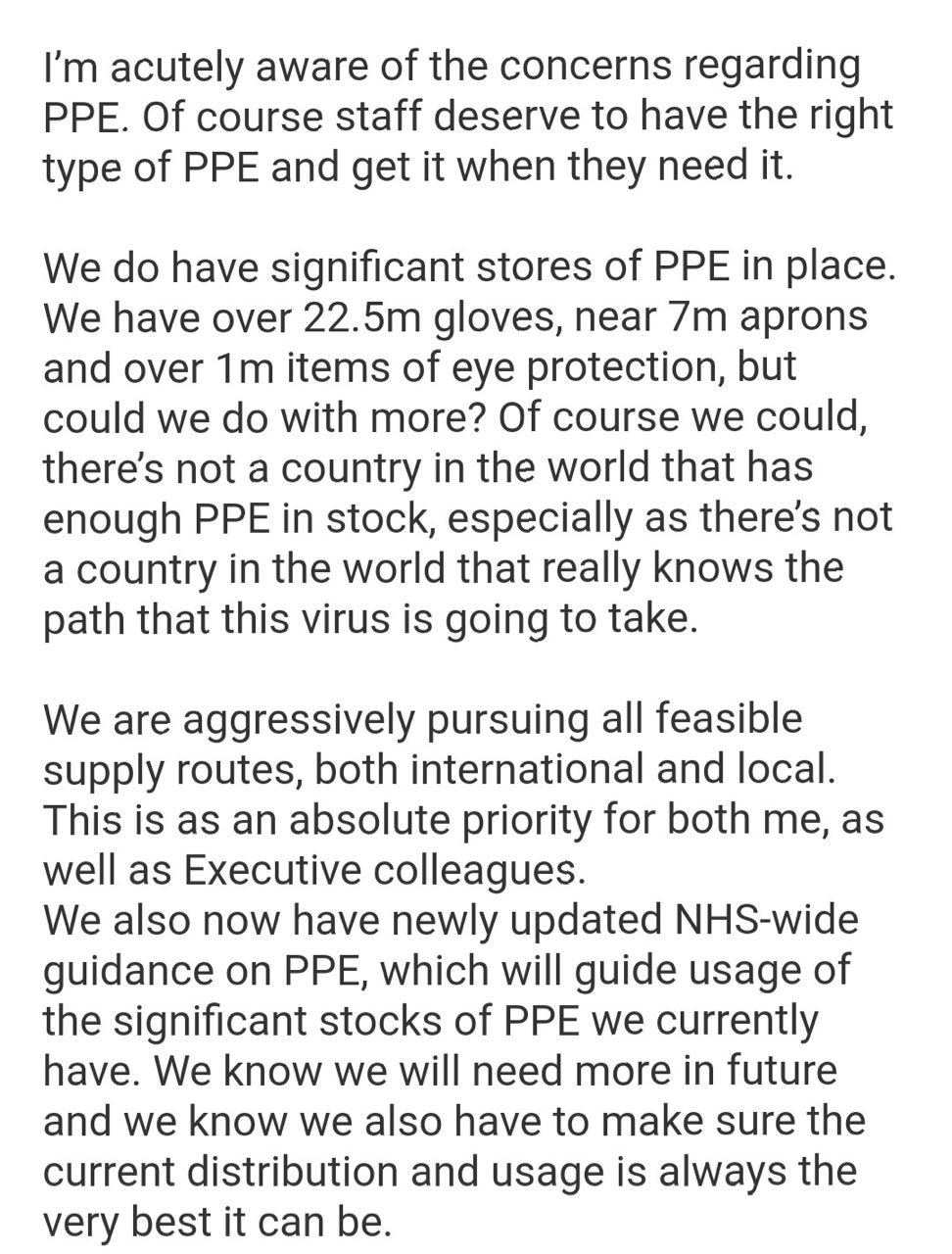 From statement by Robin Swann

He did not get involved in the political row:

“Robin is not going there,” a unionist source commented, but that doesn’t mean there is not anger:

“This was a hit-job by Sinn Fein right from the start,” my source added. 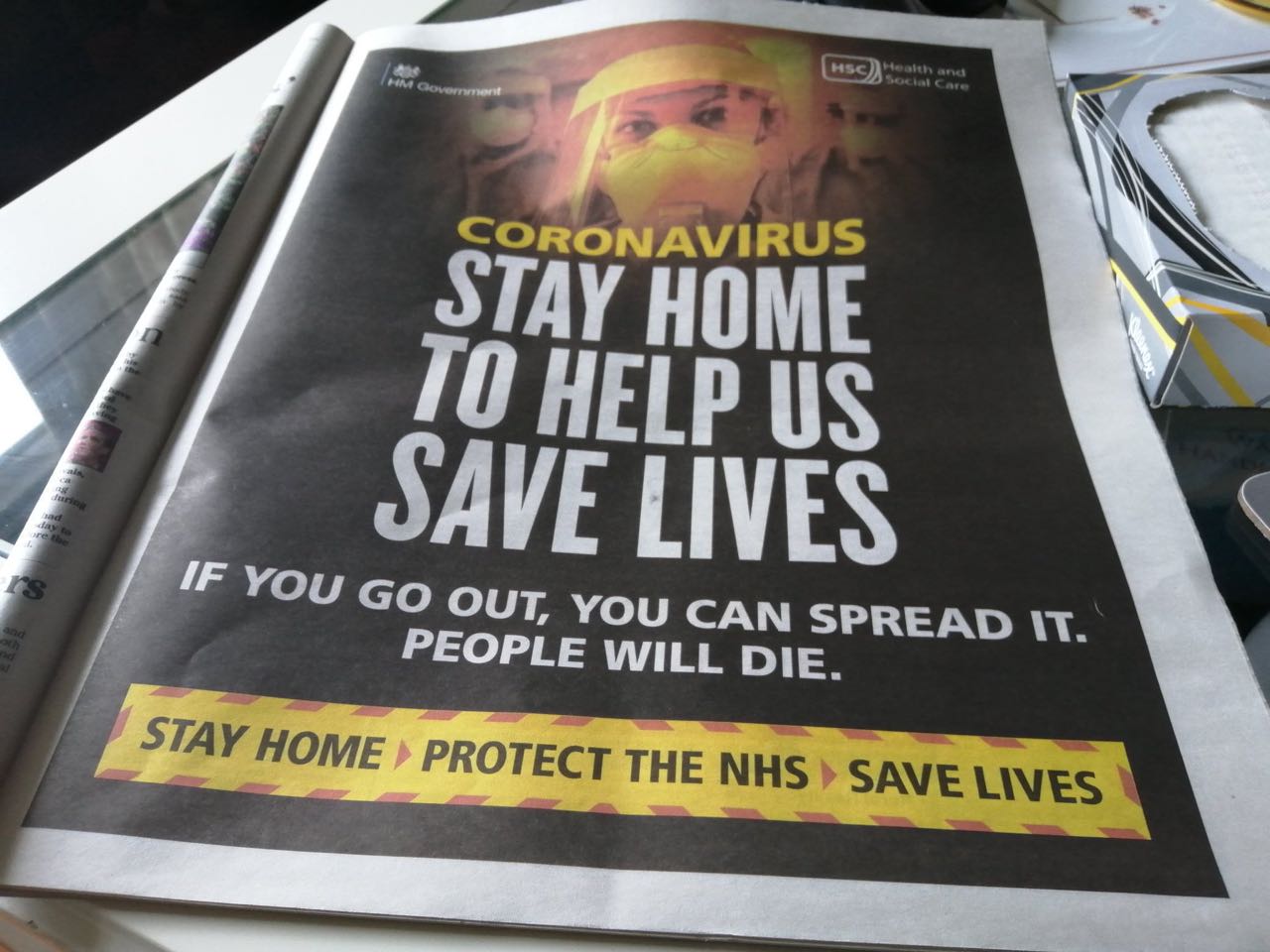 Robin Swann also focused on the advice on social distancing, washing hands and that stay home message; the things that are considered vital in trying to slow this virus down and curtailing its spread and deadly damage.

So, what has been the lesson of these past few days.

It is this; that perhaps – after those three years in limbo – our politics is now more resilient than we think.

There are those who clearly think that Sinn Fein has been at it in recent days – that this is about the border and British rule: “The Shinners like to be in government and opposition at the same time – never waste a crisis.”

These are the thoughts of one close observer, but others disagree.

Talk of Sinn Fein versus the other four parties represented on the Executive is dismissed by an insider.

I am told that Naomi Long, Nichola Mallon and Edwin Poots have also been raising questions and concerns about testing and equipment.

On this website a few days ago, I wrote that Michelle O’Neill was right to voice her concerns publicly. I still believe that to be case.

This is life and death – too serious for people to stay silent.

Covid-19 has created a world war of sorts. So, we should expect planning and operational arguments.

One of the problems in the ten years of government between 2007 and 2017 was that people bite their tongues in an effort to sustain and save the political institutions at Stormont; that is until RHI became a tipping point.

Was the deputy first minister right to personalise and focus her comments on Robin Swann? Well, that is another question.

“This is where Michelle crossed the line,” an insider commented.

That insider believes that the decisions by the first minister and health minister not to react on Friday “helped stabilise things” – this, and that “Sinn Fein had its wings clipped”; a reference to the ‘joint-order’ for personal protection equipment from China that failed to deliver.

“THIS IS THE UNKNOWN”

Look at how the headlines have turned on Boris Johnson in recent days – “everyone at war” and a “blame game” already underway.

Here, we can get too excited about political rows.

There cannot at all times and in all circumstances be a united front. If there are differences and concerns, then we need to hear them.

Covid-19 has taken us all into the darkness and fear of the unknown and politicians don’t have all the answers. Nor should we expect that they should.

As this virus moves, where to dig the battle trenches and with what tools and equipment to fight will be different decisions on different days.

In conversation with William Crawley on Friday, I said the important question is how the politicians now step back from what is being said and argued publicly and start to address some of the questions – whether about personal protection equipment or testing.

That began to happen in Friday’s Executive meeting; a calmer conversation than expected because Arlene Foster and Robin Swann didn’t step into the row.

There is more knowledge now about equipment supplies, how long they will last and what will be needed and when on the different fronts of this war.

So, the row has produced some clarity.

I repeat again what I wrote here a few days ago; that in this fight – even with a border – we are not living in two separate places.

Covid-19 is not going to pause on either side of the line.

This is not a green versus orange comment or argument; it is a statement that all of us on this island are facing an enemy the likes of which we have never known.