You are at:Home»News & Current Affairs»LEGACY: ‘On a glide-path to a general amnesty’ – By Brian Rowan
Social share:

Wednesday’s legacy re-write by the UK Government is clearly designed to be the beginning of the end of Past investigations.

If followed through, it is the end of the 2014 Stormont House Agreement; a process that has not been implemented.

The announcement here – switching the emphasis from investigations and prosecutions to reconciliation and information-retrieval – coincided with an MoD move to provide legal protections for troops who have served overseas.

The wider intention is read in the above tweet by Veterans’ Minister Johnny Mercer.

Whatever way this is dressed up and presented, these are political moves to protect soldiers; and, in all of this, the wider Northern Ireland legacy question and conundrum are secondary.

Just read some of the responses:

AN ACT OF SPECTACULAR BAD FAITH

SDLP LEADER COLUM EASTWOOD: “This is about shutting down justice and shielding former soldiers…”

SINN FEIN VICE PRESIDENT MICHELLE O’NEILL: “It is a unilateral move by the British Government to rewrite the Stormont House Agreement without consulting the political parties or the Irish Government.”

VICTIMS AND SURVIVORS HAVE HAD TO WAIT FOR FAR TOO LONG

TANAISTE SIMON COVENEY: “We would not support a proposal to introduce any special measure or treatment, regarding investigation of state or non-state actors in Northern Ireland.”

“Efforts on dealing with the past need to be benchmarked against three tests – whether it is consistent with:

(a) binding human rights obligations under the ECHR (particularly Article 2 rights regarding to an effective investigation);

(b) the Good Friday agreement, and;

(c) the Stormont House Agreement, which remains the one legacy related effort to reach maximum consensus in NI over the last 20 years.

In its current guise, this vague and contradictory statement [from the UK Government]fails all three tests.

It’s a real shame because there was a potential opportunity here to try to build some consensus around meeting those three benchmarks – but this isn’t it.” 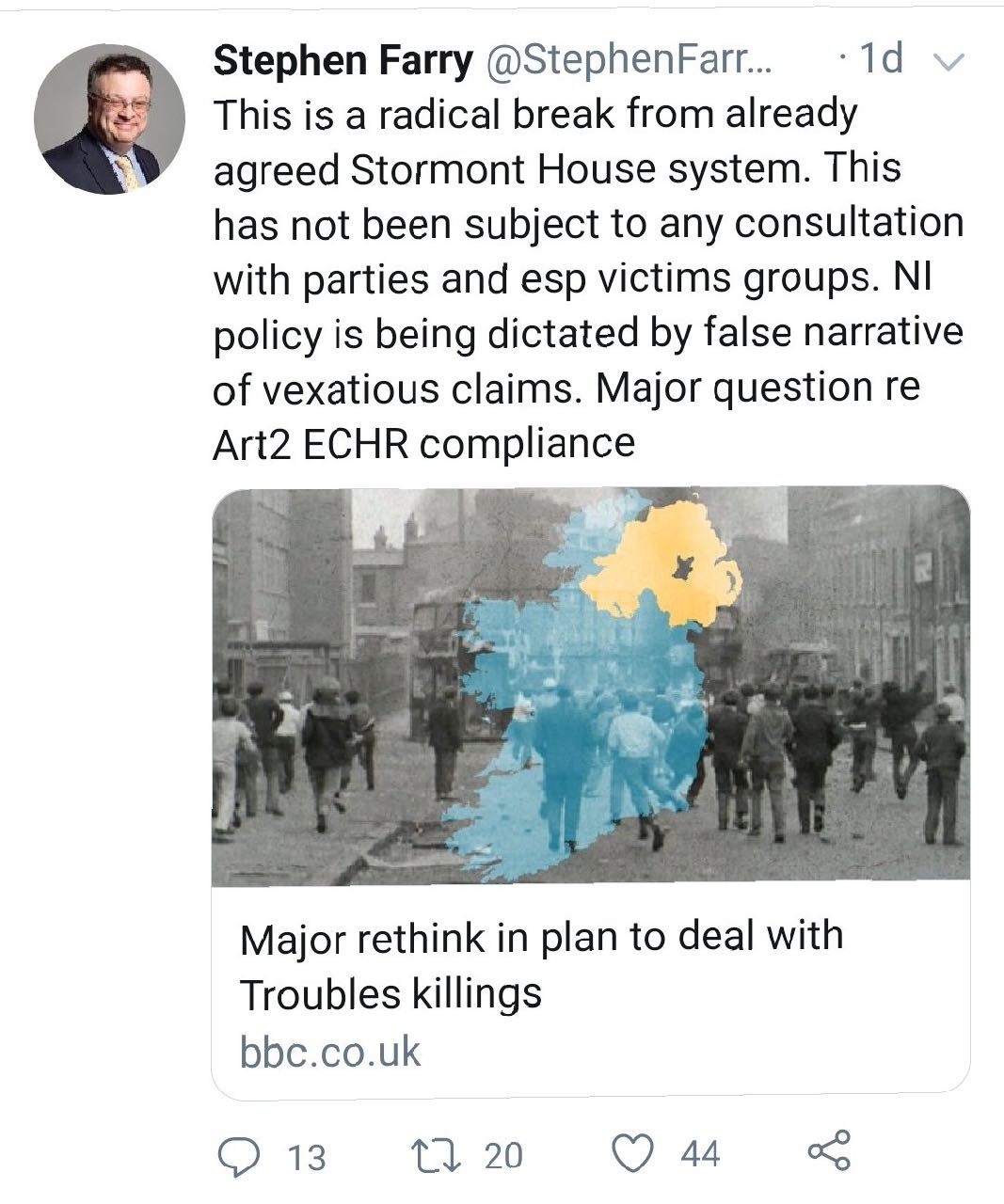 There are a number of points to make.

There has not been, nor will there be consensus here on how best to address the legacy question.

Long before Wednesday’s move by the UK Government, the Stormont House Agreement – including an Historical Investigations Unit (HIU) and Independent Commission on Information-Retrieval (ICIR) – had collapsed into disagreement. 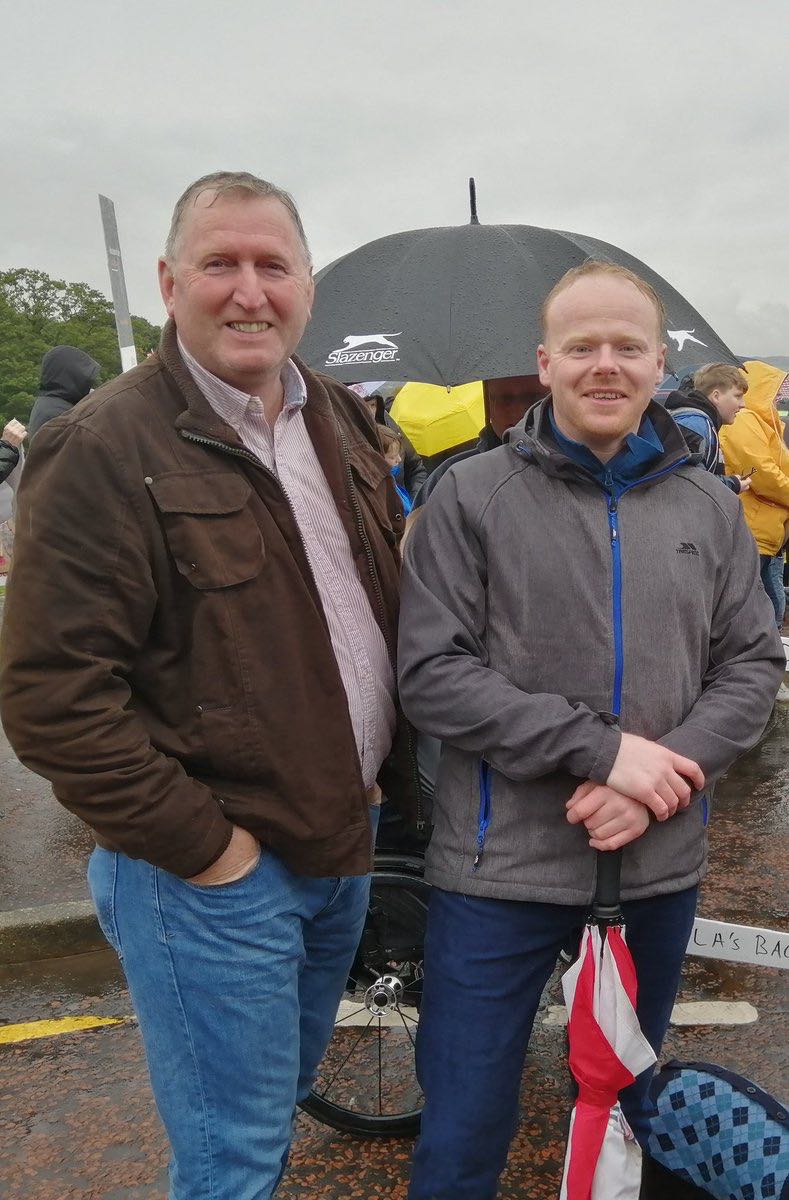 “I think the HIU, as is stands, has gone, which I’m happy with,” Ulster Unionist Justice spokesman Doug Beattie told this website.

On Wednesday’s statement by the UK Government , he says it “kicks up more questions than answers”, including:

– Who decides what is new and credible evidence?

– Who is going to write the family reports?

– How do we deal with the injured?

Questions also about how in the widest frame – stretching beyond Northern Ireland – information is accessed?

“There’s no detail [in the government statement],” he said. “So it’s difficult to fully analyse or fully understand.”

On the direction of the legacy process, after Wednesday’s statement, he added: “We are on a glide path and, I get a sense, that it is edging ever closer to a general amnesty with a pretence that we are still going to do some investigations.”

The latest UK Government proposals do not shut down the route to prosecutions, but make clear investigations will only happen if there is compelling new evidence.

After a desk-top review, the vast majority of cases will be closed and the book will not be re-opened.

It has the feel of an undeclared or unnamed amnesty and a move to draw the most-controversial of lines.

“It is difficult to read this as anything other than a crude attempt to minimise the potential for truth-recovery and accountability, particularly with regard to the role of the state,” Professor McEvoy said.

“It has all the hallmarks of the breezy arrogance which characterises some senior figures in this government – populist, contradictory, short on detail and characterised by a bullish ‘let’s get legacy done’ approach with little substantive regard for the rule of law, the views of other stake holders (including the Irish government) or delivering on the needs of those most affected by the conflict i.e. victims and survivors.”

TIME TO STOP LYING ABOUT THE TRUTH

I have long argued that the legacy process and negotiation have been far too political in design and purpose; that across the conflict board we need an amnesty to enable and enhance meaningful truth-recovery, and that we cannot have a peace process that releases prisoners and a past process that includes jail.

We need to stop lying about the truth; be more honest about what an information or truth-recovery process can and won’t deliver.

This requires conversations across the board – loyalist, republican, security, intelligence, politics and governments.

None of this has happened.

On Wednesday’s legacy developments, one source observed that “the cat is well and truly among the pigeons”.

In any other time these developments would have been screaming headlines.

More honest would be a statute of limitations across the board and, for the first time, a serious effort to develop a meaningful truth process.

Instead, we have a solo-run with a clear intention to leave the Past as soon as possible.