You are at:Home»News & Current Affairs»THERE WAS NOTHING SEISMIC or HISTORIC ABOUT TUESDAY – By Brian Rowan
Social share:

Sinn Fein’s attendance at a PSNI recruitment event on Tuesday was neither seismic nor historic; not two decades-plus after the Patten Report on police reform, and not 13-years on from the party’s decision in 2007 to support the new policing arrangements.

Attendance at recruitment events should be routine and regular – not news and not headlines.

Yet, in this place, nothing is simple or straightforward when it comes to the politics of policing.

You gauge the significance of the republican endorsement of policing in January 2007 by the fact that the Sinn Fein Special Ard Fheis at that time was preceded by an IRA Convention.

It needed that weight of support.

What happened over that weekend was described to me from within the British intelligence community as the “landmark event” – the “pivotal moment” that, in a new approach, was the decision that really ended the war. 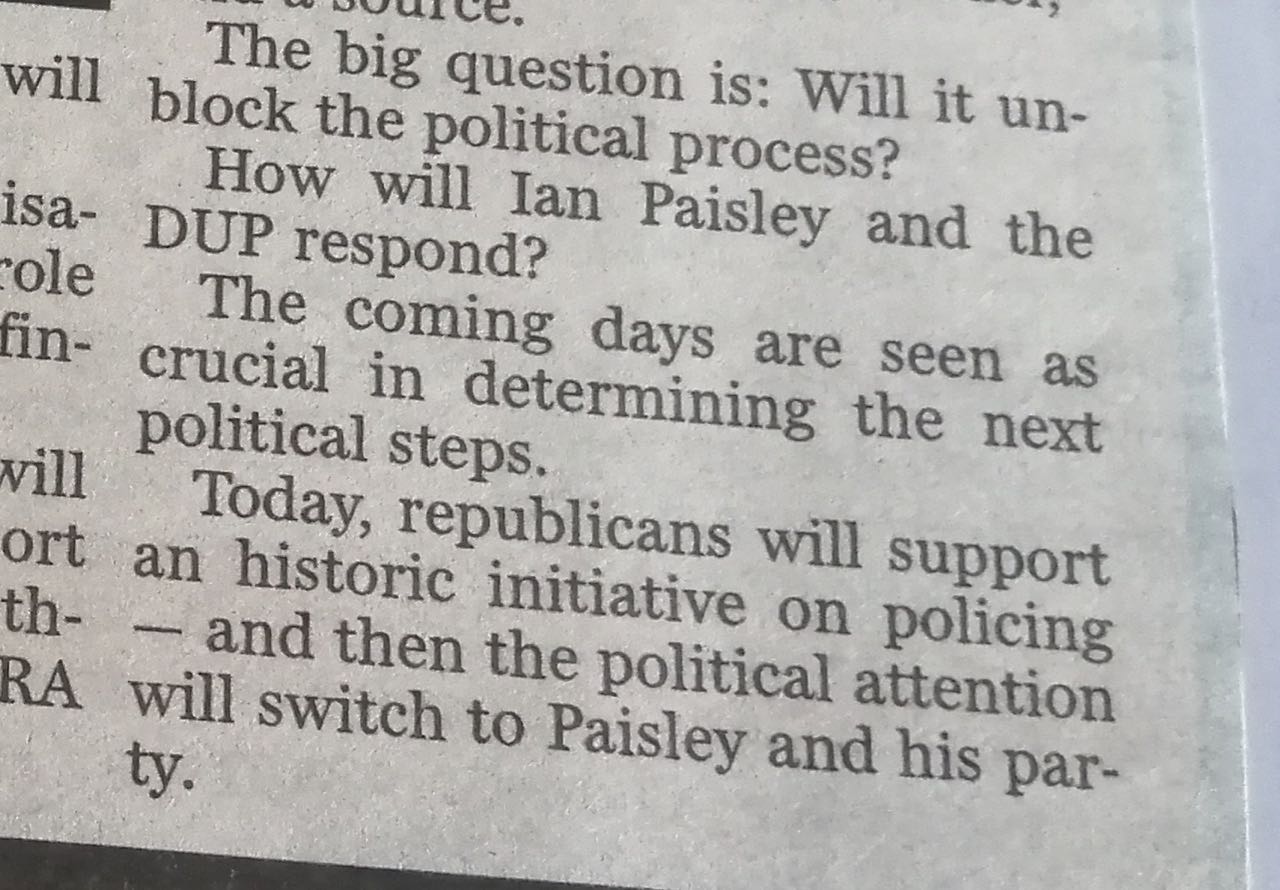 It opened up the path to the once unthinkable – to the Paisley/McGuinness Stormont Executive.

These were the seismic and historic moments that in importance rank leagues above Sinn Fein’s late attendance at a PSNI recruitment event in 2020.

Tuesday, in itself, will change nothing.

Did Patten anticipate a legacy war continuing into 2020 – the battle for the Past and the poison from that seeping and spreading and spilling out everywhere to contaminate everything?

You can’t have new policing if you handcuff it to the conflict years – leave it to investigate the Past.

Nor can or should the nationalist/republican community encourage young people to join the PSNI and then leave them vulnerable to attacks from dissidents.

50/50 recruitment is not the answer if people then have to hide from their community – live elsewhere with their policing secret.

What is the big initiative from within that community – leadership designed and Hume-like – that challenges that threat and surrounds the dissidents in a dialogue that demands they Stop?

What is needed is a community initiative shaped by the leaders of politics, church, sport and at a community level – not some intelligence cat-and-mouse play in the shadows.

These challenges are more important than Tuesday’s recruitment event.

For two decades we have heard all the talk – dealing with the Past, tackling  paramilitarism; think-tanks and Commissions and reports doing and saying the same-old things; words on paper.

When it is recycled and little or nothing happens it is reduced to ‘bolloxology’.

We need a legacy process and we should be honest enough to say that the Stormont House ‘Dis-Agreement’ is not it.

Advice should be taken from outside of politics and policing and from outside of us on how best to deliver a meaningful information process, practical help, a story-telling element/record and reconciliation.

The nationalist leadership – in its widest meaning and in an organised dialogue – needs to work out some way of confronting and challenging that dissident threat; the answer rests within that community – not with MI5.

Policing should be about policing and should not be tip-toeing around the peace process concerned about upsetting apple carts.

We can do something or do nothing.

Change is in the challenges above.

There was nothing seismic or historic about Tuesday.

Social share:
Previous ArticleWhen you are in a hole, it’s a wise move to stop digging – By Terry Wright
Next Article THE ‘SHADOWY FIGURES’ ARE NO LONGER A SECRET – By Brian Rowan