Julian Smith will be on the right side of the line when the book is eventually written on the breaking and making of Stormont.

When he arrived here last summer as Secretary of State, there was nothing certain – nothing inevitable – about the restoration of the political institutions.

That place on the hill was beyond broken and beyond use.

His moment is that news conference with Coveney on January 9th when, in the dark and the cold of a winter’s night, they announced their New Decade, New Approach deal.

After three years lost in some political limbo, the Stormont Executive was restored within 48 hours.

Few secretaries of state escape this place with something to their credit. Smith is one of that small number.

The anonymous briefing lines behind his Cabinet departure in Thursday’s reshuffle, include a suggestion that Prime Minister Boris Johnson was blindsided on the legacy element of the Stormont deal.

“It’s rubbish,” I’m told, and by someone who would know.

There is a process called ‘write round’ – a letter that keeps all parts of government informed, and there will have been such a letter in respect of the New Decade, New Approach deal; a letter that would have set out the legacy element and the plan to within 100 days publish and introduce legislation on the Stormont House Agreement.

So, if Boris was ‘blindsided’ then he and those closest to him were not looking – and not listening.

Smith is not a ‘yes-man’, and this is the reason for his Cabinet exit. 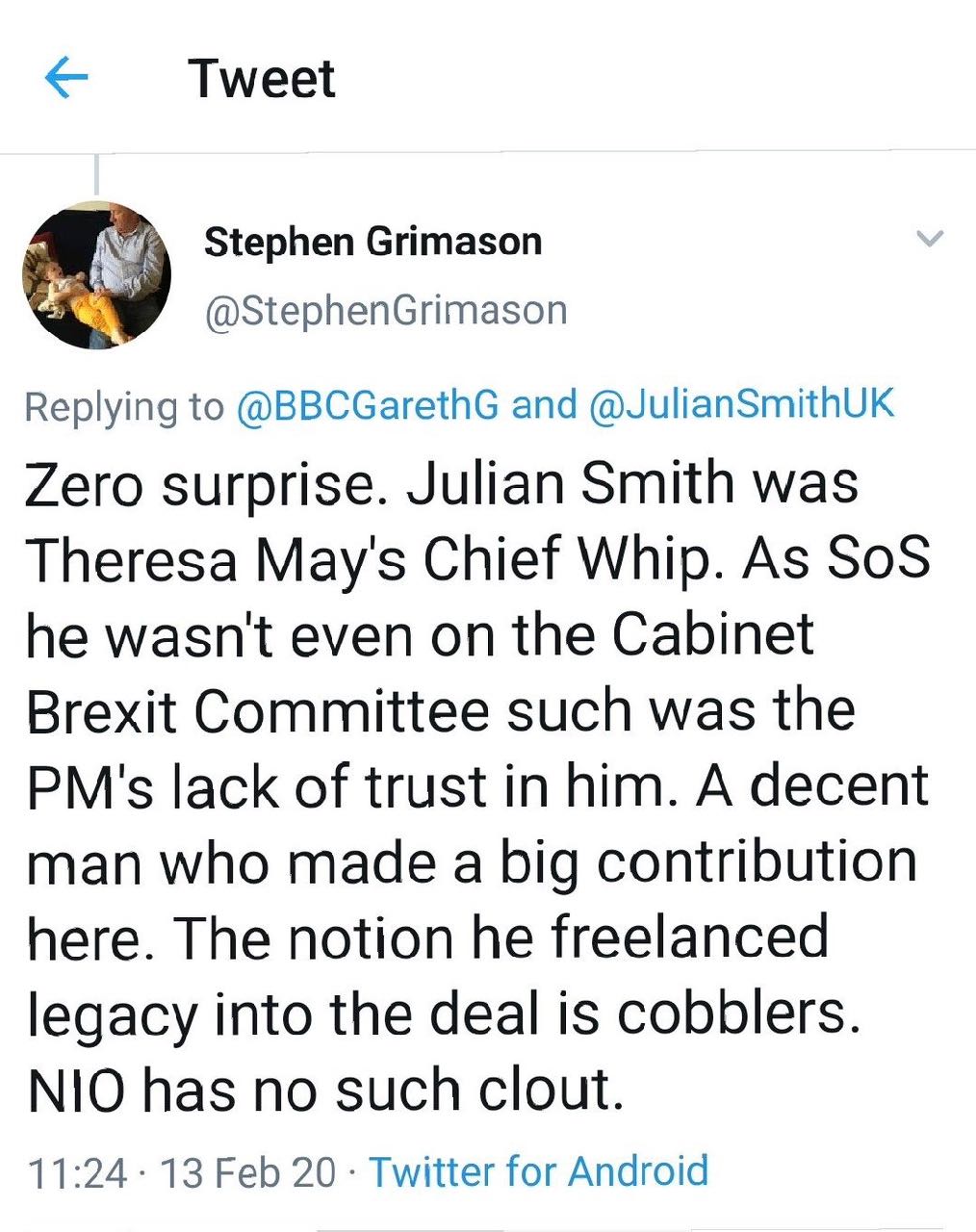 On twitter, the former BBC political editor Stephen Grimason dismissed the notion of a Smith solo-run on legacy as “cobblers”.

At Westminster, and in the highest tier of British politics, the penny has dropped on the meaning of historic investigations; that they don’t stop with the IRA and loyalists, but extend into the places of security and intelligence.

So, there is a decision for UK Government.

To proceed with the Stormont House Agreement investigations or to move to amnesty.

After a decade-plus of this issue being locked within some kind of political debating society, there are no new ideas.

You can re-frame, re-shape or re-work what is already there.

The Smith sacking comes just weeks after that breakthrough at Stormont and after the dramatic Sinn Fein performance in the Irish election.

The ‘New Ireland’ conversation is going to get louder and, those who think that any poll will be decided in a pure green versus orange vote, have not been paying attention.

In Northern Ireland, Brexit has changed everything – no overall unionist majority at Stormont, unionism losing its second European seat last year and the day-of-reckoning in the Westminster election after Boris’s deal drawing borders in the Irish sea.

So much has changed and is changing, and Johnson has decided to rearrange the furniture at the Northern Ireland Office.

The timing feels like political madness, typical of the Boris way.

Social share:
Previous ArticleUnionism being put on back foot – By David McNarry
Next Article EXCLUSIVE INTERVIEW: Gerry Kelly, his new book and his part in the IRA – By Brian Rowan