In the cold on Stormont’s hill on Thursday night we began to witness a thaw; some melting of the ice and the beginning of the end of that deep freeze that has been the story of our politics these past three years.

Secretary of State Julian Smith and Tánaiste Simon Coveney created a stage at the front of Parliament Buildings; in the dark of winter, shining new light – new hope – through those old windows.

They have been a very different double act in this phase of talks; impressive politicians, leading as governments should.

No longer is the tail wagging the dog.

After the recent General Election, the Northern Ireland Office has been freed of the hostage chains of the Tory/DUP confidence and supply arrangement.

The publication of 62 pages of text, inviting the parties to endorse this New Decade – New Approach Deal, was the clearest message that, this time, there is no stretch or elastic in the January 13th deadline.

It is over to the Stormont parties. Decision time has arrived.

ENOUGH MONEY TO GET ON THE BUS

I remember the late David Ervine reflecting on the negotiations of the ’90s and using that phrase that you don’t leave those on the other side of the table without their bus fare home.

Smith and Coveney have left the parties with enough money, and enough reason, to get on the bus – back to work and back to Stormont. That is if they want to.

The governments’ text is a compromise; a piecing together of the many lines and words that have evolved through the different documents in the different stages of this negotiation.

Many of those papers were obtained by this website, and we read familiar passages and proposals in that text from Thursday night.

The parties will have known what to expect.

None will have got all they want. Some will sell the various strands differently.

That is the way of the politics of this place; the way business is done. 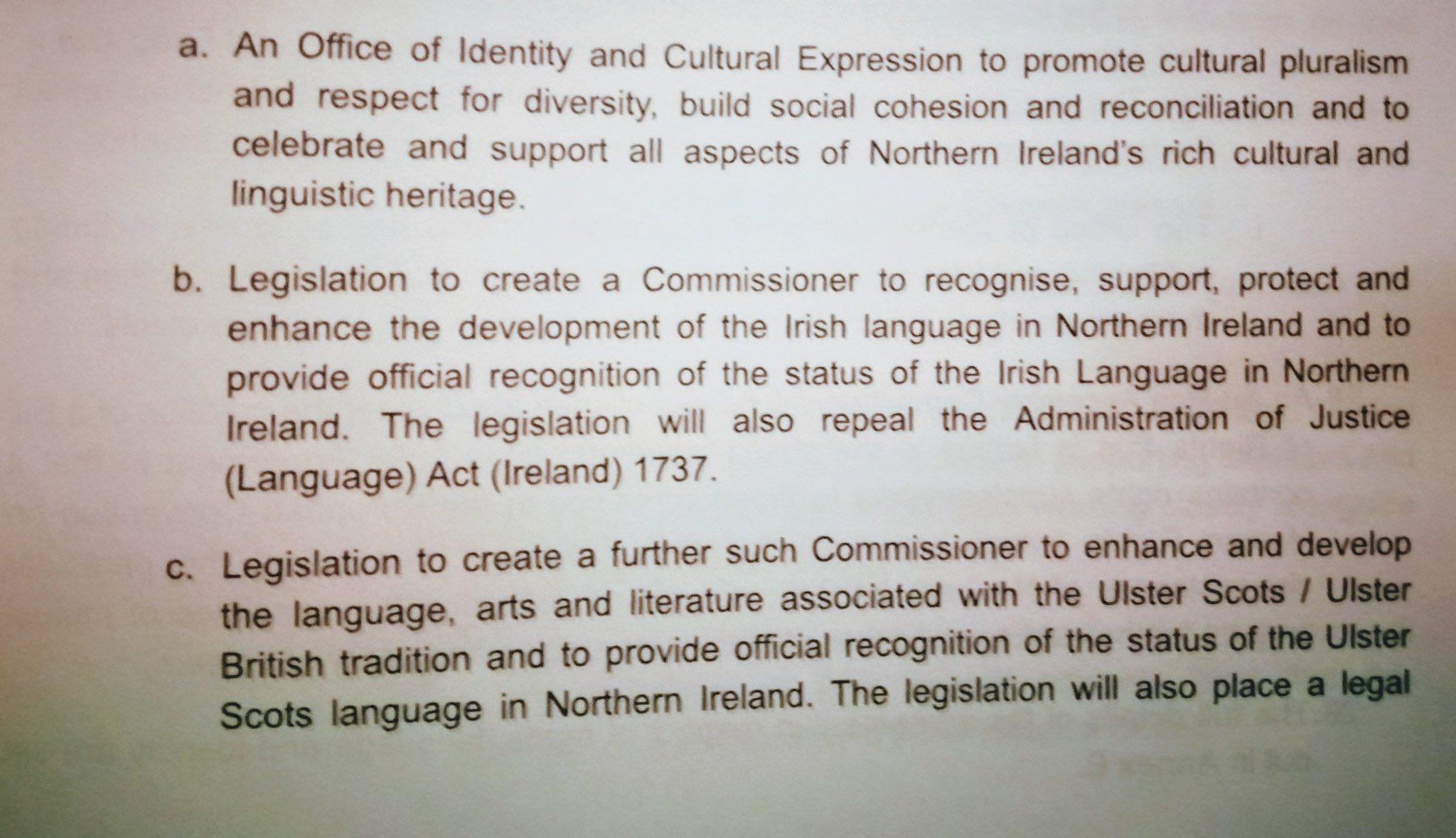 Every word of the section on rights, language and identity will be read in fine detail.

We have known for a while that this would be an over-arching package; not a stand-alone Irish Language Act, but legislation that would stand beside and inside some wider frame – and this means an Irish Language Commissioner to police how Irish is treated and fostered.

In its detail does it begin to do what it is meant to do?

The key interpretations/assessments/answers will be from outside the political parties.

In its commentary, the DUP should recognise that it was the language of crocodiles, curry-my-yogurt and the decision of one of its ministers to end funding for an Irish language bursary scheme that elevated the demands around this issue to where they are.

This is not a moment for trumpet blowing.

SUSTAINABILTY of the INSTITUTIONS

We have read the proposals on this issue through a number of documents over a period of months.

– more time – several months – to resolve matters in the event of a resignation at the top of the Executive;

– a new Party Leaders’ Forum as a place to give early warning of any issues that could cause political tension/disagreements, and

Four parties had wanted significant reforms; stricter criteria, an adjustment upwards in the number of signatures required and, in disputed cases, some outside adjudication.

The DUP was not on that ground. They wanted a stand-alone POC – no refereeing from outside the Stormont system – and we reported a few days ago that the negotiation was moving in that direction. This is where it landed.

PRIORITIES of the RESTORED EXECUTIVE – HEALTH

This is Julian Smith’s big selling point; the money to begin to treat the crisis in Health; particularly in this period of strikes.

The Secretary of State wants an Assembly and Executive back in place immediately.

On this issue it is a matter for the parties to decide.

The publication of a text by two governments gives them something to hide behind; particularly on issues that have not delivered all they want.

It is not their deal, but something shaped by Smith and Coveney and their teams.

Is it a breakthrough after three years of breakdown?

We wait for that answer in the decisions of the parties.

Three years down the road, there is light at last in the Stormont tunnel.

Social share:
Previous ArticleHow the Irish language was ‘RHI’ed – By Daniel Holder
Next Article STORMONT: MUCH EASIER TO SHAPE FROM COMPROMISE THAN CHISEL FROM STONE – By Brian Rowan