You are at:Home»News & Current Affairs»If we want a Past Process that works, then we need an Amnesty… By Brian Rowan
Social share:

On Monday the headlines were once again loud and large; the so-called ‘witch-hunt’ of army veterans back in play on the front pages alongside the latest promises for legal protections that are expected to be written into the Conservative Party election manifesto.

None of this is about delivering a comprehensive way to address the past of this place and its conflict years but, instead, it is about finding or fixing a way that looks after soldiers.

This is its principal purpose. Everything else and everyone else are secondary considerations.

The Tories, who dumped the DUP in the here-and-now of the Johnson/EU deal on Brexit, will not give a second thought to binning the proposed legacy mechanisms that we still call the Stormont House Agreement.

By now, it is, of course, a disagreement – almost five-years-old and no closer to being implemented.

No Historical Investigations Unit. No Independent Commission on information-retrieval. No story-telling archive and no reconciliation element.

Would such a framework – with an investigations unit (HIU) that would scrutinise and examine military, police and intelligence actions alongside those of republicans and loyalists – survive the Westminster legislative process?

This is the penny that has dropped. That the past is not just about the IRA and the loyalist organisations, but about soldiers and police officers and those who worked in MI5.

This is the Westminster panic and the real purpose behind the discussion for better legal protections that may eventually stretch out to become a statute of limitations or what others will call an amnesty.

I believe we need an amnesty across the board. That no one should go to jail – soldier, police officer, republican or loyalist – as part of any examination or investigation of the conflict years.

I have condensed that thought into a sentence: That you cannot have a peace process that releases prisoners and then a past process that creates them. 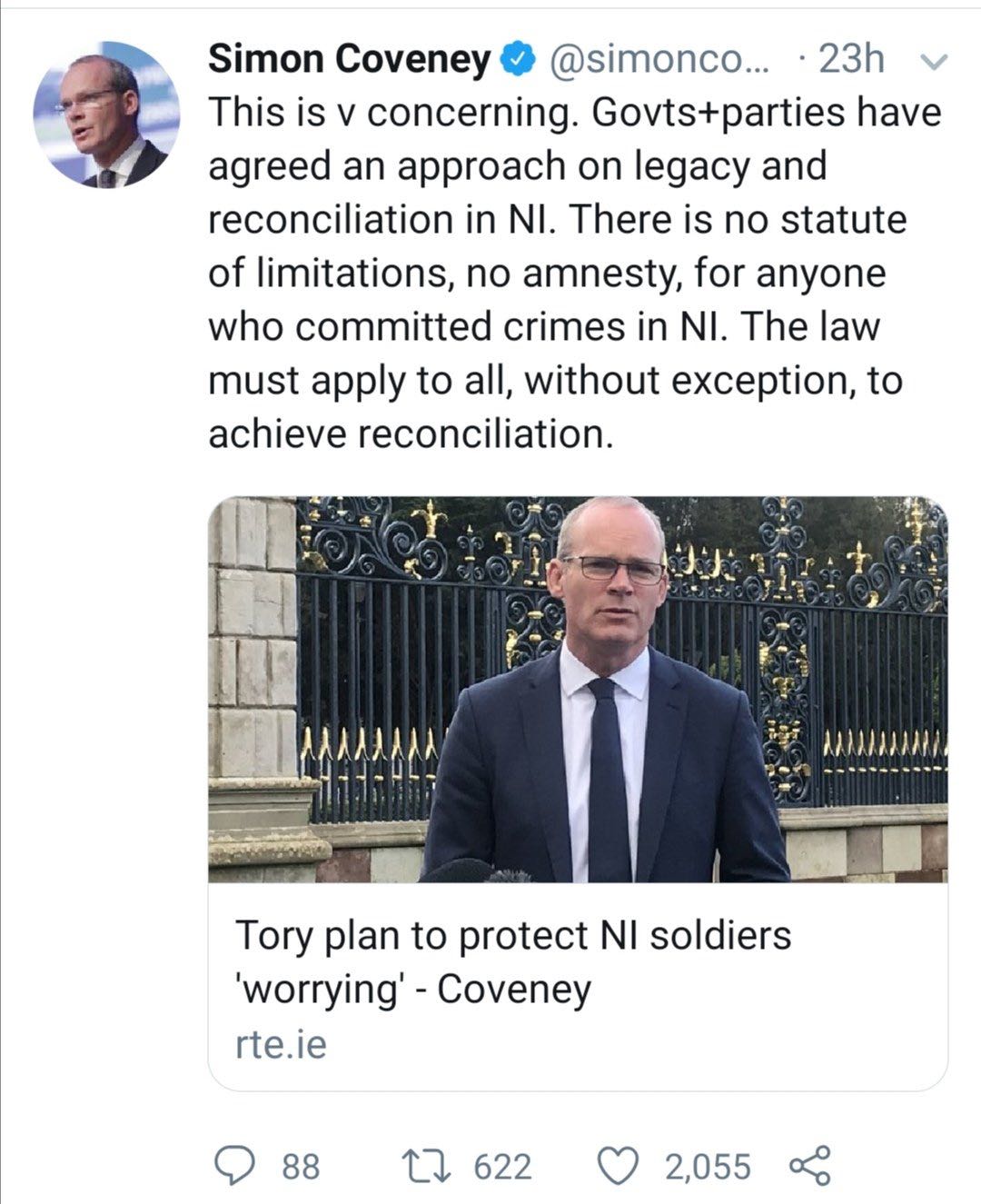 Tanaiste Simon Coveney set out his thoughts in this tweet on Monday; but think about the prisoner releases, the decommissioning of arms that ignored evidence, the process of protected information that has helped find most, but not all of the remains of those who were disappeared.

Were these things not types of amnesty?

In a peace process, there will always be shades of grey.

In any past process, information from all sides will be controlled and redacted. At best, it will be an edited truth. We should be more honest about that.

If court and jail remain within the legacy frame, then truth will be further diluted.

So, there are choices to be made.

I am told that conversations across a number of government departments are in the context of how a legacy process can deliver reconciliation.

This has to be the outcome – not some continuing war over the past.

BEYOND THE STORMONT HOUSE AGREEMENT

We need to get beyond the Stormont House Agreement.

A past process cannot be all things to all people.

What will make an information process work?

What practical help can be made available to victims and survivors?

What shape will remembering, memorial and story-telling take?

If we want a legacy process that will work, then we need an amnesty.

The ‘wars’ are not over if we have a process that can still send people to jail; and, at Westminster and in government, they need to understand the past of this place is not just about soldiers and how they are protected.

Such narrow thinking, will leave us lost in the legacy trenches.

Social share:
Previous Article“Listen for the dog-whistle” – By Terry Wright
Next Article Why any Attorney General veto over soldier prosecutions would reverse the justice reforms of the GFA – By Daniel Holder