You are at:Home»News & Current Affairs»BURYING OURSELVES IN THE CONFLICT YEARS… By Brian Rowan
Social share: 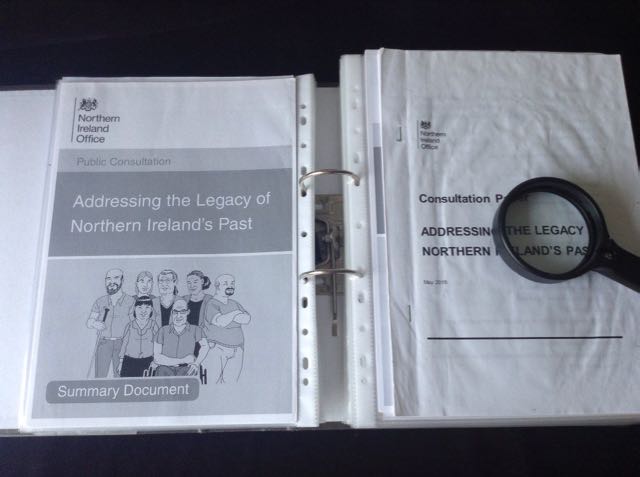 Twenty-five years after the IRA and loyalist ceasefires of 1994, it now looks like a legacy war – a recasting of the conflict period on a different stage.

The Northern Ireland Office has now completed its assessment of the responses to its legacy consultation; the process in which people were asked for their thoughts on a structure that would include a new Historical Investigations Unit (HIU) and an Independent Commission on Information Retrieval (ICIR).

There will be a published analysis of those responses. There may also be some options papers addressing the themes and issues that emerged in the consultation and, then, before legislation to put the new structure in place, there will be what is being described as a short, focused discussion, including with politicians here and in London.

How that proceeds without it becoming yet another consultation is something that is still being considered.

Already, the talks/negotiations to try to implement the Stormont House Agreement of 2014 have become this near-five-year struggle. The HIU and ICIR are part of that agreement.

Separate from the Northern Ireland Office consultation, there has been this persistent chatter about protections for military veterans – talk of what some describe as a witch hunt of old soldiers and the scripting and shaping of what others believe would amount to a state amnesty.

Just last month, Defence Secretary Gavin Williamson told the BBC’s Nick Robinson the proposals being worked on are, “to ensure that we don’t have spurious prosecutions.

“No one in the armed forces wants to have an immunity – to be above the law, but what we do need to do is ensure that they have a protection so that they do not feel under threat as so many service personnel currently do, and it’s not just about Northern Ireland. It’s about Iraq and it’s Afghanistan, conflicts before that and conflicts in the future as well.”

In relation to here, Williamson said: “We’ve got to be looking at the future of Northern Ireland – not at the past.”

Some believe he is on a solo run – playing to the veterans audience as part of Tory leadership ambitions. Others dismiss this.

They believe there is traction for his proposal beyond the Ministry of Defence, but they haven’t yet seen the substance of what is being worked on, and nor are they certain it can or will be applied here. 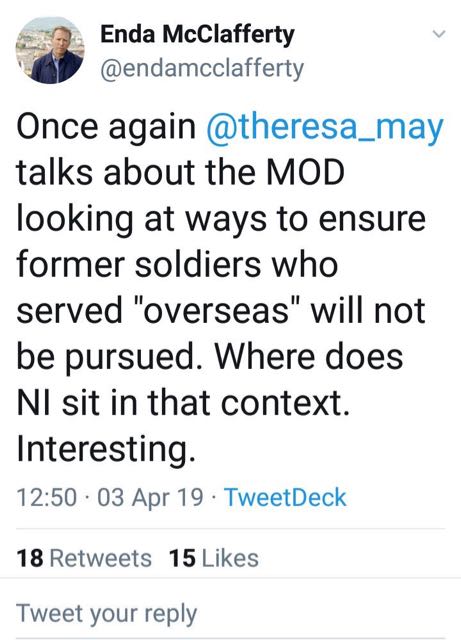 In the same period, the senior republican Sean Murray commented: “Six months on from the end of the NIO’s legacy consultation still no response from the British Government.

“Do they intend to implement the Stormont House Agreement mechanisms…or will they succumb to the pro-military lobby and introduce an amnesty for their armed forces?”

Of course, others believe that republicans are using the past to re-write history. 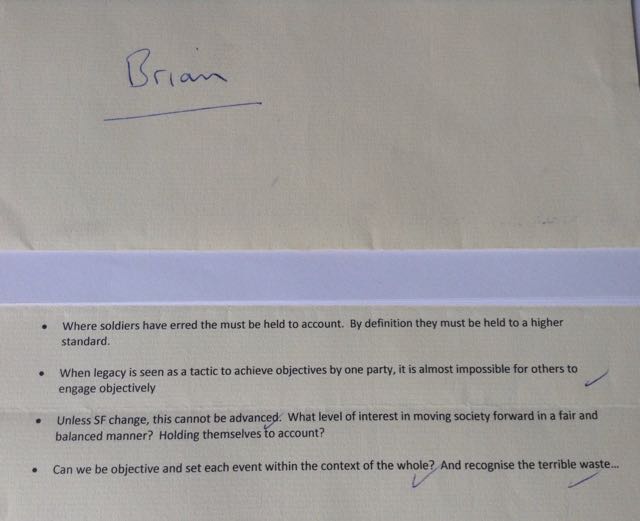 Recently, a former senior military officer shared these thoughts with me:

“When legacy is seen as a tactic to achieve objectives by one party, it is almost impossible for others to engage objectively.

“Unless Sinn Fein change, this cannot be advanced. What level of interest in moving society forward in a fair and balanced manner? Holding themselves to account?” he asked.

“Can we be objective and set each event within the context of the whole? And recognise the terrible waste…”

That “terrible waste” of the conflict years has become the present – the today and tomorrow of this place.

There is little reconciliation, but rather this continuing battle that is deepening wounds – not healing them.

A conflict cannot be half over.

On legacy, we need a process that delivers the maximum amount of information from all sides – not the parade of shame we are seeing develop before our eyes.

There should be no more jail in relation to the conflict period – not for soldiers or police officers, not for republicans or loyalists.

This means grappling with the poisonous issue of amnesty – the word we’re afraid to speak.

Let’s stop talking about truth – no side will deliver that.

If we do not address the issue of amnesty or a statute of limitations across the board, then we will spend our time shovelling the conflict experience on top of next generations – burying them and ourselves in the Troubles years.