You are at:Home»News & Current Affairs»‘A new Assembly and a new kind of politics is possible’ – By Michelle O’Neill
Social share: 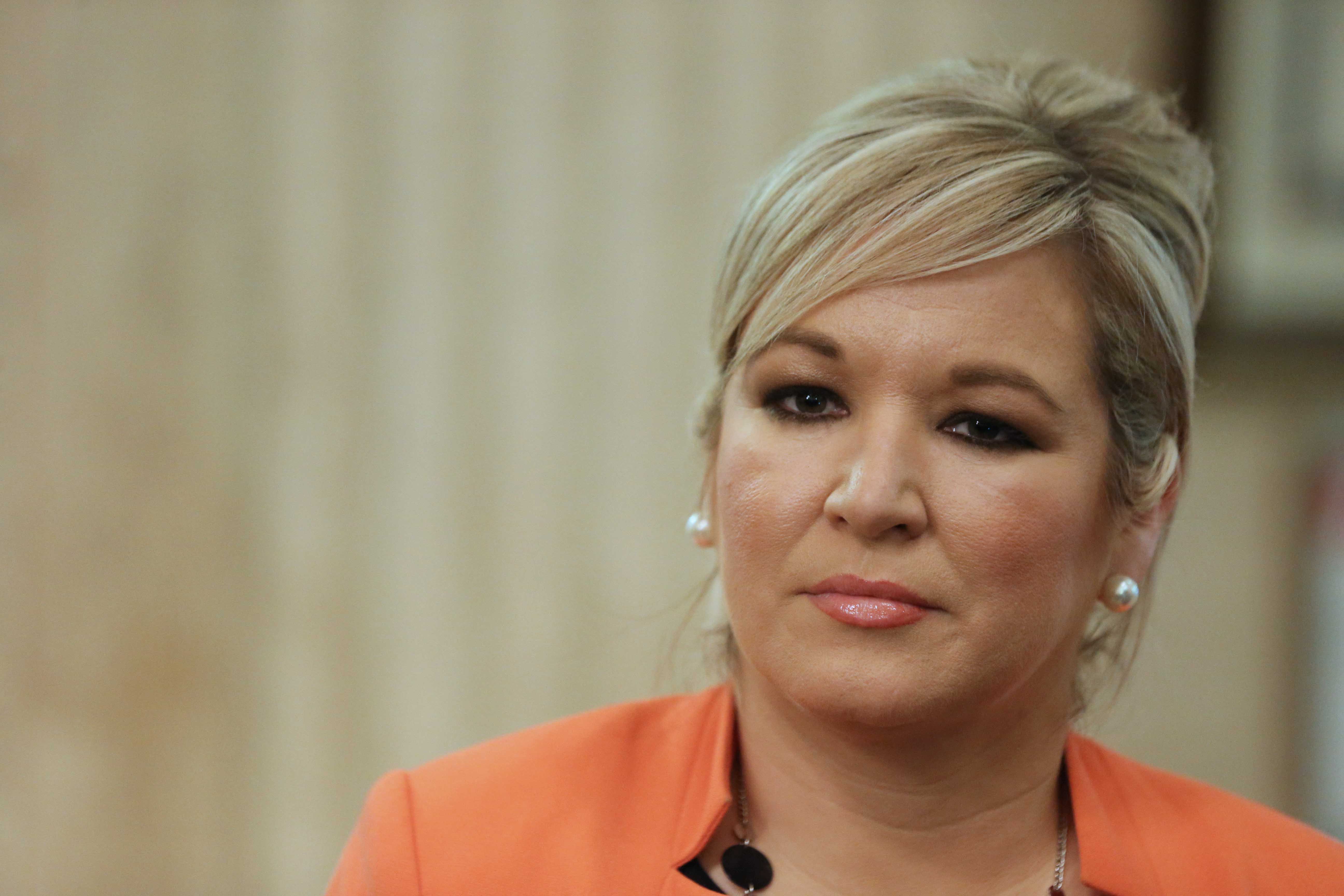 In April 2018 we celebrated the twentieth anniversary of the Good Friday Agreement.

This, despite our ongoing challenges, gave us all time to stop and reflect on what has been achieved, how over the past two decades the entire island of Ireland has been transformed as a result of the Irish peace process, where we have emerged from decades of political conflict and towards a more prosperous, peaceful and democratic society, of which this Agreement of 1998 is the very foundation stone.

It was, and remains a precious gift of peace to our young people and it is indispensable.

Sinn Féín wants to keep faith with that hope, drive change and get us back to rebuilding partnership and friendship in a working Assembly and Executive which allows us to open the door and let the future in.

Peace alone is no longer good enough for a new generation who rightly demand to be afforded civil, social, economic and cultural rights in the year 2019 which are taken for granted and routine elsewhere on these islands, but unjustly denied here.

Much has changed and been achieved since the civil rights campaign of 1968 but to think that any minority or group in 2019 would still have to fight for basic rights including women, the LGBT community, Irish speakers and ethnic minorities is simply not sustainable.

This is unjust in the modern era.

Through all the political breakdown and rancour of the past two years, it can be tempting to believe that the prospects of restoring the Assembly and the Executive in the North are as remote as ever.

But I believe there is hope for optimism.

Despite these setbacks all parties and both Governments need to refocus on resolutions rather than recrimination in the New Year.

It is imperative that we arrest the political drift in which we find ourselves currently and stop the attempts to unravel the Good Friday Agreement and its political institutions before it becomes unsalvageable.

The public deserve to have functioning government and one in which they can have confidence.

The present realities and challenges which have undermined any genuine attempt to restore the Executive must be confronted and removed.

There is no escaping from the catastrophic course that Westminster and the DUP are charting with a reckless Brexit agenda that is hurtling towards a no-deal crash come March.

This, along with the ongoing denial of rights to important sections of citizens in the North and vicious austerity cuts imposed from London are wrong and unjust.

The DUP/Tory Confidence and Supply arrangement at Westminster where Theresa May’s Government is wholly reliant on the DUP to stay in power robbed Theresa May and her government of any pretence of impartiality in the last round of negotiations for the restoration of power-sharing.

However, despite all this, progress is possible – if political will exists.

Progressive nationalism expects to see – the equality, mutual respect and all-Ireland approaches enshrined in the Good Friday Agreement fully embraced by the DUP – that the negative attitude and disrespect for Irish national identity and culture be consigned to the past and those who wish to live their lives through the medium of the Irish language can do so and have protection before the law – that prejudice felt by women, the LGBT community and ethnic minorities not only stops, but is prevented rather than facilitated by government.

It would also be hard to find anyone who does not believe that reform of how the Assembly and Executive and our body politic operate is a necessity, not a choice, particularly after watching the debacle of the RHI scandal unleashed before the public inquiry.

Every Government wrestles with difficult and complex challenges, and we are no different, but the basic norms of power-sharing, parity of esteem and principles of the Good Friday Agreement must be accepted and embraced by everyone in order for us to succeed.

This means discharging our duties in good faith.

It means serving all of the people equally and preventing discrimination.

We must promote the interests of the whole community and uphold our commitment to genuine power-sharing, respect and mutual trust towards one another.

We must follow the example of the late Martin McGuinness by actively promoting reconciliation, and building bridges we can all cross to end sectarianism and bigotry.

It means the socialisation of our politics where civic society – trade unions, voluntary/community sector, business, academia, farmers, business, churches, students – all have a permanent place and space to advise, input and hold our politicians to account.

We want an Assembly which operates differently from what went before, and to usher in a new kind of politics, which is progressive, respectful, and has integrity.

Public confidence must be earned and trust rebuilt if the Assembly and Executive are going to have any credibility.

Any new Executive should in my view be an inclusive partnership coalition Government.

Never ever again can we see scandals like Red Sky, NAMA, RHI happen in this place.

It is totally unacceptable and unethical behaviour.

We need civil service reforms and proper checks and balances too.

Whatever the civil service’s role has been in contributing to the RHI debacle, nobody doubts that it has a critical role in ensuring there is never a repeat, therefore we must look at serious reforms.

We need Ministers competent to do their jobs.

We need legislative reform to ensure that all Special Advisors operate in an accountable and lawful fashion if we are to uphold the highest standards in public office.

We need open Government where decisions and how they are taken and in whose interests are laid bare and properly scrutinised day and daily with no hiding place for any risk of malpractice or cronyism.

We all need to know that if we were to re-enter Talks that those participating have the political will to reach agreement; have the mandate and authority to actually take decisions; and know what they are seeking – each party brings their own issues, and every party has issues they want resolved.

Brexit is hurtling towards us like a train wreck.

It is clear to everyone that when Brexit was conceived by the Tories, Ireland was typically never a consideration.

The implications of dragging the North out of the EU while the South remains did not feature in the 2016 referendum debate in Britain.

Now the consequences have become clear.

The return of a hard border in Ireland has become the main obstacle to the deal which is on the table.

Tory Brexiteers, the DUP, and the Opposition at Westminster are all opposing that which avoids a hard border – the ‘Backstop’.

The backstop is an insurance policy and our bottom line.

From my perspective the ‘backstop’ is an Irish solution to an English problem.

We do not want Brexit.

There is no good to come from Brexit.

Nobody should be in any doubt that this is the most defining period since the Good Friday Peace Agreement in 1998.

The people of the North of Ireland voted by a cross-community majority of 55.8% to remain.

The majority of MLAs elected are anti-Brexit.

We are mandated to defend the North’s interests.

The DUP do not speak for the people of the North.

We will defend our interests at every turn.

This deal currently on the table is by no means ideal, but it is the least bad option for Ireland.

The four Remain parties, Sinn Féin, SDLP, Alliance and Green Party represent the majority in the North and we believe that there is no such thing as a good Brexit and our preference is for no Brexit at all.

We recognise that the majority of people, businesses and civic society do not want Brexit either.

We have a shared responsibility to protect jobs, economic stability and people’s livelihoods.

At the very least, this means avoiding a hard border, protecting the Good Friday Agreement and hard won peace of the past twenty years, and staying within the Single Market and a Customs Union.

Therefore as a basis for this, we maintain that there is a necessity for the backstop as set out in the Withdrawal Agreement to be banked.

We support the ‘Backstop’ contained within the Withdrawal Agreement because it gives a legal guarantee that ‘…unless and until’ a subsequent agreement is in place in regards to the future relationship agreement by 2020 the backstop kicks in.

Let me be clear – the Withdrawal Agreement, and its impact on Ireland, in particular the North is by no means any more than a moderate and primitive deal.

By contrast, we believe that a no deal situation would be catastrophic for our economy and society.

It would mean our crashing out of the EU on 29 March 2019 with no terms of departure, and literally over a cliff-edge with supply shortages and many businesses unable to trade, resulting in job losses and a serious economic downturn.

We become a “third country” with practically no access to the EU single market; a physical hard border or EU frontier being put in place in Ireland; and World Trade Organisation (WTO) rules being applied.

All of this presents a serious threat to business and households, and creates an uncertain future for us all.

I fully respect the right of the British people to leave the EU and I wish them well – however, I am absolutely opposed to the British Government dragging us out of the EU against our will.

Sinn Féin have influenced and made our case to the EU27 in the Dáil and the European Parliament.

We will continue to make our voices heard and to build a progressive coalition around our national interest in the coming weeks ahead.

There is a growing sense that circumstances are rapidly changing which will inevitably lead to the final break-up of the constitutional structures of the United Kingdom which Theresa May and the DUP say they are committed to preserving.

The Sinn Féin leadership has met with the British Prime Minister and the British Secretary of State over the past few months.

We have made it clear that in the case of a Brexit crash-out and no-deal scenario that it is absolutely incumbent on them to put the constitutional future to the people here through a unity referendum.

Their planned imposition of Brexit in Ireland once again demonstrates the failure of partition, and exposes further the gaping democratic deficit inherent in a partitioned Ireland.

People from across this society, and yes even those of a British identity, are questioning what will be the merits, benefits of staying within the union after Brexit.

The EU has said in the event of reunification the whole of Ireland will automatically be subsumed back into the EU.

So the debate on our constitutional future is as much about our relationship with Europe as it is about Ireland itself.

The issue of Irish Unity has taken on a new dynamic because of Brexit.

Demographics are changing and so too is the political landscape.

This cannot be ignored.

The Good Friday Agreement gives people the opportunity and choice to decide our future together.

How we live together.

How we work together.

The political momentum on change is moving in that direction.

Sinn Féin wants a New Ireland, a fairer Ireland, and a united Ireland.

But we do not claim to own the debate.

The debate on our constitutional future actually threatens no one, therefore let’s have it in a mature and rational manner.

In the New Ireland there can only be victory for us all.

A shared history does not mean a shared memory or even experience of the past, but:

We can determine and create a shared future together

We can open doors and,

We can let this future in.

We must give people hope and our young people opportunity.