You are at:Home»News & Current Affairs»“Heart o’Jesus take away these hearts of stone and give us hearts o’ flesh” – Interpreted by Terence Wright
Social share: 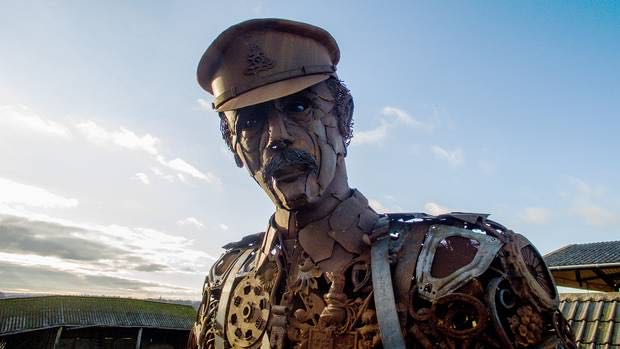 My knowledge of nationalist involvement in World War One was never as extensive as that of soldiers mainly from the unionist community who served in the 36th Ulster Division.

After discovering in my late mother’s family home, war medals and a card bordered in black with a black ribbon and containing a photograph of Sergeant Thomas Bailey, killed in action on 1st July 1916, I was prompted to learn more.

Over the years whilst understanding the causes of the war remains complex, the diverse and personal motivations and experiences of Irish soldiers not only in the Irish divisions but in English, Scottish, Australian and American regiments have served to provide an insight into the past on many levels.

A visit to the war cemeteries in France and Flanders where many of these volunteers and conscripts lie buried, leaves no one in any doubt as to the human cost of conflict on a grand scale regardless of the motivation, individual and communal.
This, and coming to learn more of the injured lives of those who survived the war and how many of them were drawn back into conflict resulting in more death, suffering and imperfect agreements similar to World War One brings a challenge, whilst acknowledging sacrifices, to commemorate sensitively in an inclusive way.

In Northern Ireland the last 30 years and their legacy afford no place for complacency or claim to a higher morality. Even in remembrance, conflict continues around wearing a poppy and hardens cultural and political identities. Newspapers and social media are awash with imagery and comments, many from local representatives, that reflect sincere desire to commemorate loss and sacrifice but, in some cases, stray into partisan and populist ownership of how and what we should remember.

Progress has been made in acknowledging the shared losses that the wider community in Northern Ireland and the island of Ireland experienced in the two World Wars. However, there remains evidence that memory of this is still influenced by our failings in dealing with the losses of the conflict from the late 1960s onwards not least over the choices made in regard to wearing a poppy.
There is no agreed narrative as to the causes of our troubles but neither can there be a hierarchy of loss or hurt. Many died and were injured in a variety of circumstances and as a result of choices made by themselves and others. Memory and hurt are raw and not helped by the enforcing of a particular style of remembrance. We can only manage this through inclusive remembrance linked to reconciliation and transformation. At its heart are the personal memories and experiences of the individual.

Disillusioned by the Easter Rising of 1916, now referred to as ‘the revolution’, playwright Sean O’Casey put the following words into the mouth of Mrs Boyle in ‘Juno and the Paycock’:

“Heart o’ Jesus take away these hearts of stone
And give us hearts o’ flesh!
Take away this murderherin’ hate an’
Give us Thine own eternal love.”

One suspects that away from the public commemorations, in the privacy of homes where a space has been created by an act of violence, prompted by a warped resolve that a life is to be ended to serve some political purpose, the ‘hearts o’ flesh can be found.

Social share:
Previous ArticleNorthern Ireland will be more British than ever post Brexit – By David McNarry
Next Article DUP’s confidence and supply agreement with Conservatives not worth ball of blue in EU withdrawal negotiations – an independent view