You are at:Home»News & Current Affairs»DUP’s confidence and supply agreement with Conservatives not worth ball of blue in EU withdrawal negotiations – an independent view
Social share: 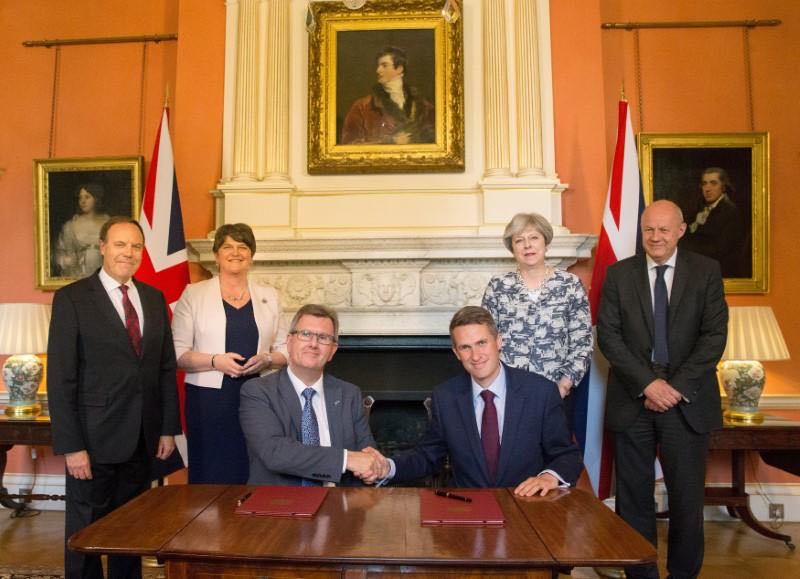 The draft agreement for the withdrawal of the UK from the European Union that was published last week sparked a maelstrom in London that has kept most people enthralled, if not with the contents of this long and hugely legalistic technical document, then at least with the political fallout that has subsequently  arisen.

The briefings, counter briefings, resignations, statements of loyalty and predictions of an imminent apocalypse have been a newspaper headline writer’s dream.

The Irish question has of course been front and centre of this issue with solemn declarations of respecting the status quo, no return to a hard border and even the provision of a back stop to the backstop. The ever expanding lexicon of Brexit is nearly as hard to comprehend as the draft withdrawal agreement itself. There were some cynics who felt that the Irish issue was merely a convenient cover for the real battle front that was the maintenance of a single customs area between the UK and the EU.

This author could not possibly confirm or deny that this was his view. However I did find it somewhat amusing that in the withdrawal agreement there was reference to the United Kingdom and the Union as the two principal parties. Does that mean that those living in the UK are no longer regarded as Unionists? Clearly the conspiracy theorists have missed that one!

So as the dust starts to settle on the withdrawal agreement and the cold choices that lie ahead start to take shape, there were three issues of relevance to us who live in the Northern part of Ireland or the most westerly part of the UK (take your pick of location definition as you choose!)

Firstly, there was support for the proposed withdrawal agreement not only from the business community but also from the agricultural community. Both sectors, which are free from the normal constitutional straight jacket that incessantly binds our local political parties, felt that the deal on the table was a good one for Northern Ireland/the North. The main rationale being that we could not only continue to trade customs and tariff free with Ireland and the EU but we could also continue to trade customs and tariff free with GB.

However, at the risk of sounding like the little boy who stated that the emperor was not wearing any clothes, is this state of affairs not what currently exists?

Is everyone getting excited that as a result of this long contested agreement we are going to get the chance to carry on doing exactly what we are already doing? If ever there was a doubt that Brexit is a bad idea for business, I think that the euphoria that nothing will change here proves that point. Alternatively, one might also conclude that the enthusiastic welcome for the withdrawal agreement by the local business and agricultural sectors is due to the fact that for nearly two years we have had no local government and no legislative decisions being taken. Therefore, any type of legislative decision, even if it emanates from beyond our shores, will be warmly welcomed as an alternative to the incessant stalemate that is the NI Assembly.

Secondly, and sticking with the theme of lack of local government, it is incredulous that one of the most important political events over the last century, which will impact everyone living in this part of the world for generations to come, has had virtually zero input from our locally elected representatives, who collectively claim to have our best interests at heart. There are those who would state that the lack of local input into the EU withdrawal process has been no bad thing given our political parties’ inability to work together and collectively blame everyone else but themselves.

However, no matter what one’s view is of our local politicians, it is clear that without input from representatives who are from Northern Ireland and who represent the people who live here, decisions impacting on our long term future are unlikely to fully meet our long term needs.

The third issue is that of the interaction (or more accurately the non-interaction) of the UK government with Northern Ireland. Despite the claim of the DUP that their confidence and supply agreement with the Conservative Party has put them at the heart of Government, it is not apparent that this is the case. It does not take an observer with a keen understanding of politics to recognise that for the last five years, the UK Government’s main representative in Northern Ireland has been given a clear mandate of ensuring that they nor anyone else ‘rocks the boat’. Indeed it is hats off to Messrs Villiers, Brokenshire and Bradley for being the least intrusive and indeed evasive Secretaries of State ever to hold that office.

Now why has this been the case? Well in simple terms it is the fear that anything that is done for Northern Ireland is looked at through the ‘independence lens’ in Scotland by the SNP. So, whatever love there is for Northern Ireland in London (and in my experience that love is in short supply), there is a much greater sense of love for Scotland. Therefore, keeping a lid on the North is very much part of ensuring that Scottish calls for independence are not encouraged. Whilst this is not something that is much talked about, there was clear evidence of this issue last week when Nicola Sturgeon (and to be fair her Welsh counterpart Carwyn Jones) almost immediately called for similar Protocols for Scotland and Wales to the one that was included in the withdrawal agreement for Northern Ireland/Ireland. These calls were immediately rejected by officials in Westminster who clearly do not wish to open up new fronts in the Brexit battle. However, what this third issue really highlights is that as long as the Scottish independence boat is not being rocked, the UK government are quite content that the ongoing suspension of the NI Assembly is a price they are happy to pay.

So after the dramas of the last week, where are we heading to in respect of Brexit? The answer is something upon which this author is not able to conclude. If pushed I rather think we will end up with a deal of some description that will be described as the least bad option. However it will result in both Remainers and Brexiters feeling let down and unsatisfied. In our neck of the woods, the whole Brexit issue has resulted in significant shifts in the tectonic plates of politics here and the lines between nationalism and unionism are becoming ever less clear. Indeed when tectonic plates shift significantly there can be resultant earthquakes and tsunamis. The final outcome of the Brexit process for us here in Northern Ireland may have far greater implications than simply an ongoing single customs area or a tariff free deal with Europe.

Social share:
Previous Article“Heart o’Jesus take away these hearts of stone and give us hearts o’ flesh” – Interpreted by Terence Wright
Next Article BREXIT – why the DUP is wrong about the Withdrawal Agreement – By Glenn Bradley