You are at:Home»News & Current Affairs»HOPE FROM THE BLOODLUST: WHERE DID IT GO AND HOW CAN WE GET IT BACK? – By Alan McBride
Social share: 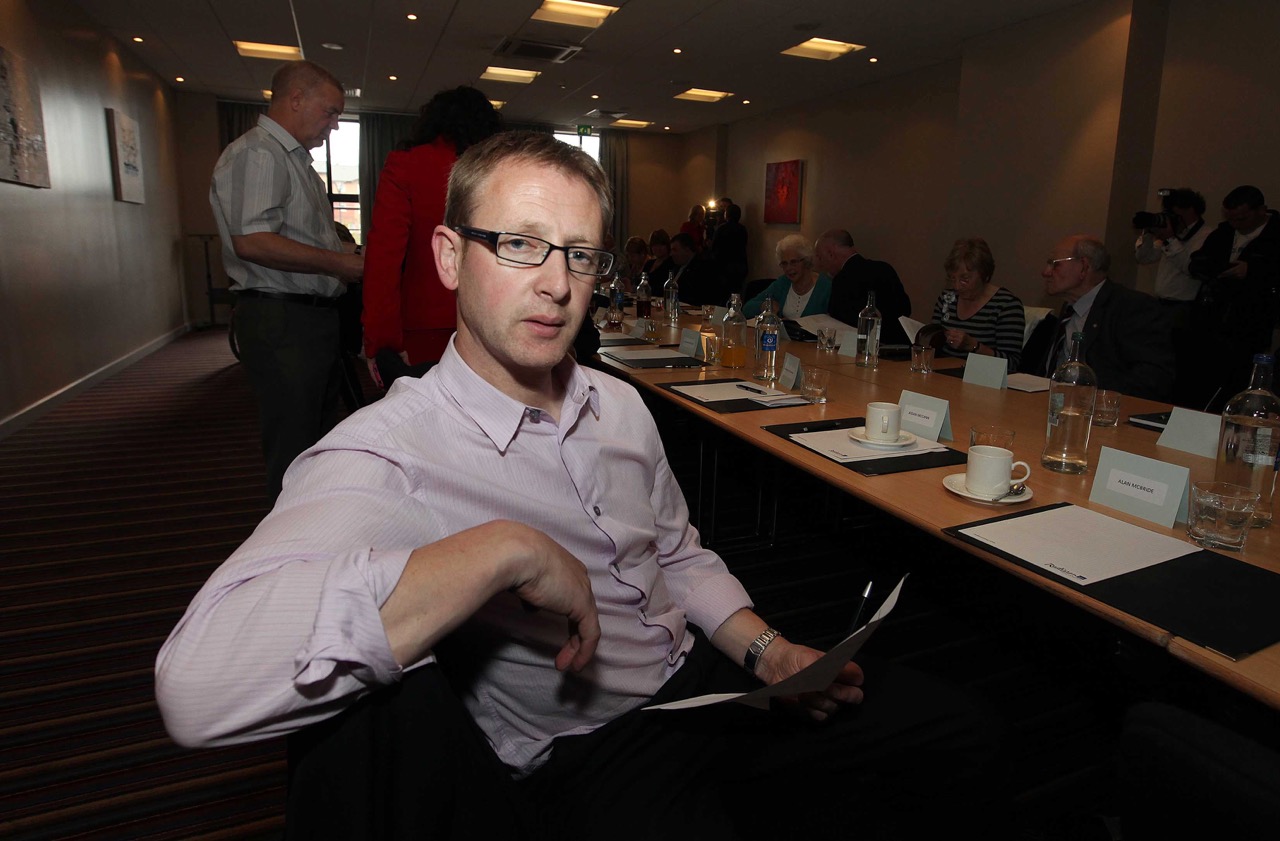 The week from the 23rd to the 30th October 1993 saw twenty four people lose their lives in one of the bloodiest weeks of the ‘Troubles’.

The killing started with the Shankill Bomb on the Saturday and there were other killings during the week, before concluding with the Greysteel Massacre on the following Saturday.

My wife Sharon and her dad Desmond were amongst the dead on that terrible day on the Shankill Road.

On the 25th anniversary of their deaths I can’t help but think back to the horror of that week and the lives that were lost but today I also want to think about the hope that emerged from the bloodlust and to ponder where it went and more importantly when will it be back.

Throughout the 25 years I have tried to remain optimistic. There have been undoubted highs, like the IRA decommissioning their weapons, Sinn Fein signing up to Policing and age old adversaries sharing power.

Sadly, there have also been lows, like the 158 people that have been murdered, the growing polarisation of politics and the collapse of the Northern Ireland Assembly.

I have a long-standing friend who tells me that my optimism is misplaced if I think that local politics can fix the current mess.

He argues that factors in the wider political context militate against progress here – especially the reliance of the present Tory government on DUP votes at Westminster.

My view is that local politics can be different, and it has been seen to be different, and furthermore it was essential to making progress here even when all the external ducks were nicely lined up with Bill Clinton, Tony Blair and Bertie Ahern in office.

Did I hear someone laugh? Back in the days before the Belfast Agreement, you would have been right to laugh, but since then we have seen political leaders who have risked their own interests, their parties and potentially their lives for the sake of putting an end to conflict.

Where are those kind of leaders now?

John Hume risked his party to bring Sinn Fein to the negotiating table.

David Trimble risked his to persuade Unionism to join them there.

Gerry Adams – love him or  loathe him – risked his personal safety as he made himself the target of dissident republicans.

And the biggest transformation of all, Ian Paisley, the Reverend Dr Never went into government with Martin McGuinness.

These men were all LEADERS.

They weren’t cynics exploiting the worst attitudes of their electorate; they made brave decisions that were taken not to bolster their popularity, further their career, expand their party, or benefit “their side”.

They made decisions for the common good, decisions that gave our children a chance, and thank God some of our children at least have grown up with little or no knowledge of the Troubles.

When Sharon died I made a big decision to move out of my Loyalist estate into a mixed area.

I wanted my daughter to grow up with friends from all sides of the community, and it worked.

One Eleventh Night I was getting ready to go round the bonfires, something I had done since I was a child.

My Catholic neighbours from across the street called over and invited me and Zoe to a barbeque at their house.

I explained that we could go for a while but since it was the Eleventh Night I would have to leave early to go round the fires.

What happened next has stayed with me for a long time and has served as a reminder of the kind of Northern Ireland in which I want to live.

When we arrived at their house they had built a small bonfire in their back garden, just for me.

There were no flags on this fire and no effigy to be burned.

I sat around the fire, drinking beer and eating a burger.

We talked about everything and anything as our kids laughed and played together in the garden.

Later on as I stood watching an Irish Tricolour burn on another loyalist bonfire I thought about what had just happened in my neighbour’s house and wondered why it couldn’t be like that all the time.

That’s the kind of Northern Ireland for which I voted in 1998.

It’s still the kind of Northern Ireland I want to be part of in 2018.

On this day, 23rd October 2018, twenty five years after the death of my wife, I implore our politicians to get back into government.

Perhaps they could take a leaf out of my Catholic neighbours’ book and ask what can I do to be a good neighbour?

I know if I wanted to be a good neighbour I would do all in my power to make my neighbour feel welcome.

To let them know that they have a right to be here, to value their culture and to respect the things that they hold dear.

Is any of this hitting home Arlene, Michelle or Mary Lou?

Imagine how you could transform society if you went into politics to try and please your neighbour and make them feel welcome rather than please yourself?

An act that protects the culture of Unionists and Loyalists?

These things don’t have to be contradictory or cost the earth and be delivered at the cost of education or health.

Not doing it is costing us so much more in terms of missed opportunities and the ability to steer our own course.

How long will you continue to play hardball before the penny drops?

We need you working together to deliver the kind of Northern Ireland envisaged in the Belfast Agreement.

The Agreement didn’t have much to say on victims, but it did say that ‘the achievement of apeaceful and just society would be the true memorial to the victims of violence’.

I believe that’s still the goal and I want you to work together to deliver it.

Social share:
Previous ArticlePOLITICS – THE PAST – AND THE PAINTER – By Brian Rowan
Next Article There is another way to govern Northern Ireland – By Mike Nesbitt