You are at:Home»News & Current Affairs»Unpacking the facts of ‘The Living History Course’ in Stranmillis College – By Peter Weil
Social share: 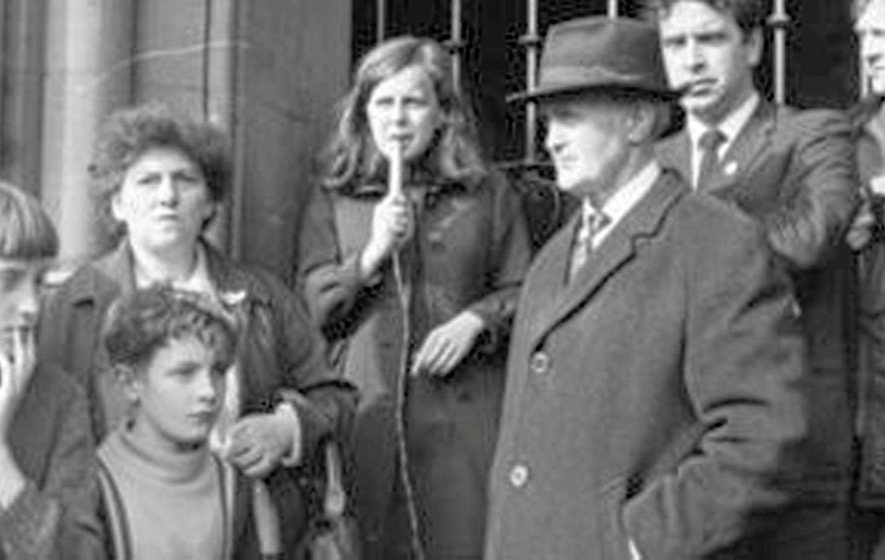 Image courtesy of The Irish News

A couple of weekends ago I was strolling along the beach, minding my own business, when I ran into two of my neighbours. After exchanging a few pleasantries, they asked me what I was up to. I started to tell them about the Living History course which I am facilitating  at Stranmillis. Their faces fell. “Who have you booked?” they asked. Failing to pick up on the whiff of disapproval and distinct lack of enthusiasm on their part, I started to list the speakers – Bernadette McAliskey, Lord Kilclooney, Sir Kenneth Bloomfield, Austin Currie, Brid Rodgers, Stratton Mills…..I hadn’t even got a third of the way through the line-up when one of them exclaimed indignantly: “I thought we’d got rid of that shower. What do you want to be bringing them back for?”.

It was a fair question. Why are we launching the course? Are we simply wallowing in the past?

2018 is not only the half century of the Civil Rights marches but also the centenary of the end of World War One. “The whole map of Europe has been changed … but as the deluge subsides and the waters fall short we see the dreary steeples of Fermanagh and Tyrone emerging once again.” exclaimed an exasperated Winston Churchill.

100 years on, Bernadette McAliskey, who launches the course on 6th September, made a similar point this weekend, albeit from a different perspective. “We think we know a great deal of history and we know none… we have to change how we view the past, not simply how we view the present or the future, or we don’t understand the need to fundamentally change.”

Only by discovering who we really are, can we hope to begin to understand and celebrate our diverse traditions. The aim must be to achieve that awareness of all our histories without becoming the prisoner of a single culture.

Our guests will help us with that journey of discovery. Yes, there will be former political figures and civil servants in the mix. They are joining us because they want to share the moral dilemmas with which they’ve wrestled and the lessons they’ve learned along the way. Expect to hear the unexpected. A former head of the civil service confesses that he sometimes feels “like a party to a marriage whose partner no longer feels or shows any real affection? …..There are moments, I confess, when even I .. wonder if we would not enjoy a more dignified position as a community within a united Ireland”?

Austin Currie said recently: “ It (the Housing discrimination)  was so blatant, we had to do something… I had tried everything else. As a public representative, this injustice was rankling, and something had to be done.” But he now also recognises where Caledon led. “Had I known the consequences of what I intended to do later that day, at Caledon, would I have proceeded with it? Would I have gone ahead had I known …that the action I was about to take would initiate a process that would lead to the loss of nearly 4,000 lives?…These are some of the questions I have wrestled with for more than thirty years.”

Over the ten week course the class will also be invited to reassess some hitherto “established facts” in the light of fresh evidence. In 1968, for example, was the then Home Affairs Minister, William Craig, truly the champion of law and order and the RUC as he professed to be?

Consider this remarkably prescient letter from the RUC’s Inspector General on 24 November 1968 to Bill Craig in which he argued against banning the civil rights marches.

“It must be pointed out that death and destruction would be Inevitable and the impact on the whole way of life in Ulster would be catastrophic.”

“Police information indicates that many professing Unionists support the protesters, and the trouble emanates from a comparatively small minority of people holding extremist views.”

“I  would also suggest, very earnestly, that people holding important public positions should carefully refrain from making public statements which are, perhaps quite unintentionally, calculated to inflame passions.”

“Unless there is a marked change in the situation soon I am afraid that the small police force we have in Ulster will be up against a problem of maintaining law and order unprecedented in the history of the Province, and one which they may find quite impossible to cope with successfully.”

A team of six Stranmillis students, who are training to become primary school teachers, are working with me to prepare the sessions. They will soon be in charge of educating the next generation. They will be awesome teachers. 1968 is ancient history for them – just as, when I was their age fifty years ago, the First World War was firmly rooted somewhere in the past and had no relevance to me.

In July when the petrol bomb attacks started up again in Derry, I decided to show the students footage of both Bloody Friday and Bloody Sunday. The students had never seen the films before; they were shocked and horrified by what they saw. They also understood the connection with what was currently happening in Northern Ireland.

That is why a study of our history is so crucial. We can not allow ourselves the luxury of making the same mistakes and indulging in the same quarrels.

Winston and Bernadette have both got it right.