You are at:Home»News & Current Affairs»Might Alex Salmond have a second coming despite his current woes? – Asks Andrew Collier
Social share: 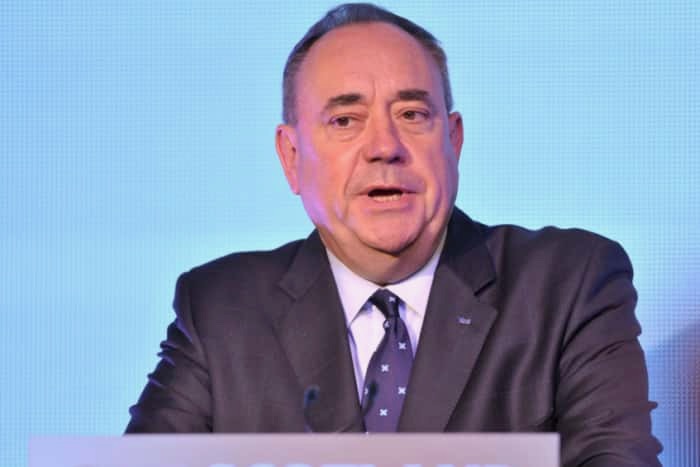 Politics in Scotland, always febrile, have taken a turn for the surreal. Alex Salmond, the former SNP leader and First Minister, this week dramatically resigned the party membership he has held since his youth.

The move has been made as a result of allegations – which Salmond strongly denies – that he sexually harassed two women during his time in the top job. He has also launched a civil court action against the Scottish Government’s complaints procedure.

Salmond believes its investigation into the alleged harassments when he was First Minister was unfair and unjust, claiming it denied him the opportunity to see and challenge the case against him. His complaint is about process, not the alleged harassment itself. As he gave back his party card, he also launched a £50,000 crowdfunding campaign to fund the legal action. His continuing support in Scotland ensured that it passed its target within a matter of hours and has now gone over £100,000.

Salmond has achieved near mythical status among Scottish nationalists. An SNP member for 45 years and at its helm for 20 of them, his term as a recent UK party leader has only been beaten by Gerry Adams.

But the latest crisis pits him against not just against the Scottish Government he headed up until he stood down after losing the 2014 independence referendum, but also against his long-time friend and colleague Nicola Sturgeon, who replaced him as both SNP leader and First Minister.

Sturgeon said she felt a “huge sadness” about the situation and was personally upset by it, but added that it was important that legal process was allowed to take its course. The complaints have been passed to Police Scotland, which is assessing the information.

The drama, now inevitably nicknamed Salmondgate, has sent shockwaves through Scottish politics. Salmond and Sturgeon have been colleagues in arms for nearly 30 years, working tirelessly together during that time for independence and building their considerable individual reputations as a result.

As events have unfolded, the public dialogue between the pairhas been mutually polite and respectful, and Salmond says he plans to re-join the party when he is cleared. But under the surface there are real tensions which the harassment allegations have exacerbated.

In one of the biggest surprises of last year’s UK general election, Salmond lost his Westminster seat in the north east of Scotland to the Conservatives, and since then, freed from the constraints of elected office, he has sometimes discomfited Sturgeon and her supporters. For instance, he signed up for his own show on the Kremlin-funded RT against her wishes and he clearly wants to see a second independence referendum happen more quickly than she does.

The argument over the timing of a second independence votehas opened up a growing fault line within the SNP in recent months. Salmond and his supporters are keen to see that happen quickly, while backers of Sturgeon prefer caution, wanting Brexit – which Scotland voted against – to run its course and make its implications clear first.

Salmond’s robust and rapid response to the Scottish Government investigation will polarise opinions further and could split the party open. The crowdfunding appeal may not primarily be about money, though judicial reviews can be frighteningly expensive.

It is also a useful way for Salmond to gauge his current level of support across the SNP and Scotland and cement the narrative of a mass movement in his favour. With thousands of people having pledged money in just a matter of days – including, it is thought, some of the party’s own parliamentarians – his status as a Scottish political icon has been confirmed.

However, his call for financial help has angered many Sturgeon loyalists, who argue that Salmond has considerable financial resources of his own and should not be seeking money from others.

The whole affair, they think, is disruptive and damaging enough: he should back off and let the First Minister do her job. Another allegation among Sturgeonites is that by his actions, Salmond may make it harder for women who have suffered harassment to come forward in the future.

Team Salmond take a different view. Though he has always been a Marmite character – plenty loathe him – affection for him across Scotland remains massive. At the age of 63, he is clearly nowhere near ready to give up the spotlight yet. He remains a huge political beast, larger-then-life in every way: unafraid, egotistic, pugnacious, clubbable and certain of the righteousness of his views and his cause. Sturgeon prises political doors open gently, while with Salmond, the favoured approach is to knock them down with a bulldozer.

There are also suspicions within the Salmond faction that Sturgeon is turning the SNP into a family business, to the party’s detriment. The party’s internal discipline is legendary, but there are private grumblings about the fact that its Chief Executive is Peter Murrell, who also happens to be the First Minister’s husband.

Some feel this coupling is inappropriate, leaving too much power, influence and political direction in the hands of two people and their small, secretive inner circle of confidantes.

It may be that the current crisis will exacerbate these stresses further, causing tempers to flare and loyalties to break. There will be frustration on all sides that the whole affair is deflecting energy and resources away from other, far more pressing political issues such as Brexit, the Scottish Government’s troubled domestic agenda, the possibility of another UK general election – and the current holy grail of nationalist politics, a second independence referendum.

For Sturgeon at least, the timing of the current row is also unfortunate. The whole affair has exploded only weeks before the SNP’s annual conference in Glasgow. In recent years, the party has worked hard to manage controversy off the official agenda, but that has merely created a fertile environment for tearoom plotting and manoeuvring among delegates. If Salmondgate becomes the story during an otherwise unremarkable conference and dissent grows, an internal split could easily become a public chasm.

There is another side to all this. During the 2014 referendum, the SNP was the undisputed leading force in the campaign, with Salmond at its head. The wider Yes movement provided cover and the impression of a broad-based movement, but in reality the party controlled and funded most of the operation.

Next time round, it will be different. Support for independence now goes beyond the SNP. Recent events such as recent marches organised by the cross-party All Under One Banner movement have attracted thousands onto the streets. A growing number of independence activists are led by the cause and not by Nicola Sturgeon. They are impatient for another referendum and feel Alex Salmond better reflects their worldview.

Salmond, whose political instincts are perhaps still sharper than any other current UK politician, knows this. It may also be the case that because of its sometime arcane procedures, winning re-admission to the SNP may be trickier than he thinks.

Perhaps he is already hedging his bets. Earlier this summer he used a speech in Edinburgh to reveal his so-called Morningside Declaration, saying the Yes movement was “energised” and “very strong” and that he would be joining it on the day and hour Sturgeon fired the starting gun.

Stories are circulating that Salmond may not just become part of this Yes campaign, but might actually lead it. Working alongside the SNP, co-operating with it but not answerable to it, would allow his expansive, uncompromising and populist style of leadership to flourish.

More worryingly for Sturgeon, Salmond as the leading Yes figurehead would likely also emasculate her own defining role in a new battle for the soul of Scotland. She would be diminished: a brigadier compared to a general, a red-tabbed staff officer to a soldier’s leader, relishing combat and marching from the front with fixed bayonet across the battlefield.

And what then? Win or lose, she might not survive thatsubordination. Whichever way the country swings next time, it will be a fragile and nervous nation afterwards, seeking to cleave to old certainties while wanting the security of new, confident governance.

It may just be, then, that the next SNP leader and likely First Minister might be – you’ve guessed it – Alex Salmond. The man already known for having more comebacks than Houdini might just do it again.

Perhaps it really is the case that when it comes to Scottish politics the more things change, the more they stay the same.

Social share:
Previous ArticleAN OPEN LETTER TO THE LEADERSHIP OF THE DUP AND SF – OMAGH AND BEYOND – BY PEACEMAKER, THE REV HAROLD GOOD
Next Article Unpacking the facts of ‘The Living History Course’ in Stranmillis College – By Peter Weil