You are at:Home»News & Current Affairs»Apprentice Boys March On – By Terry Wright
Social share: 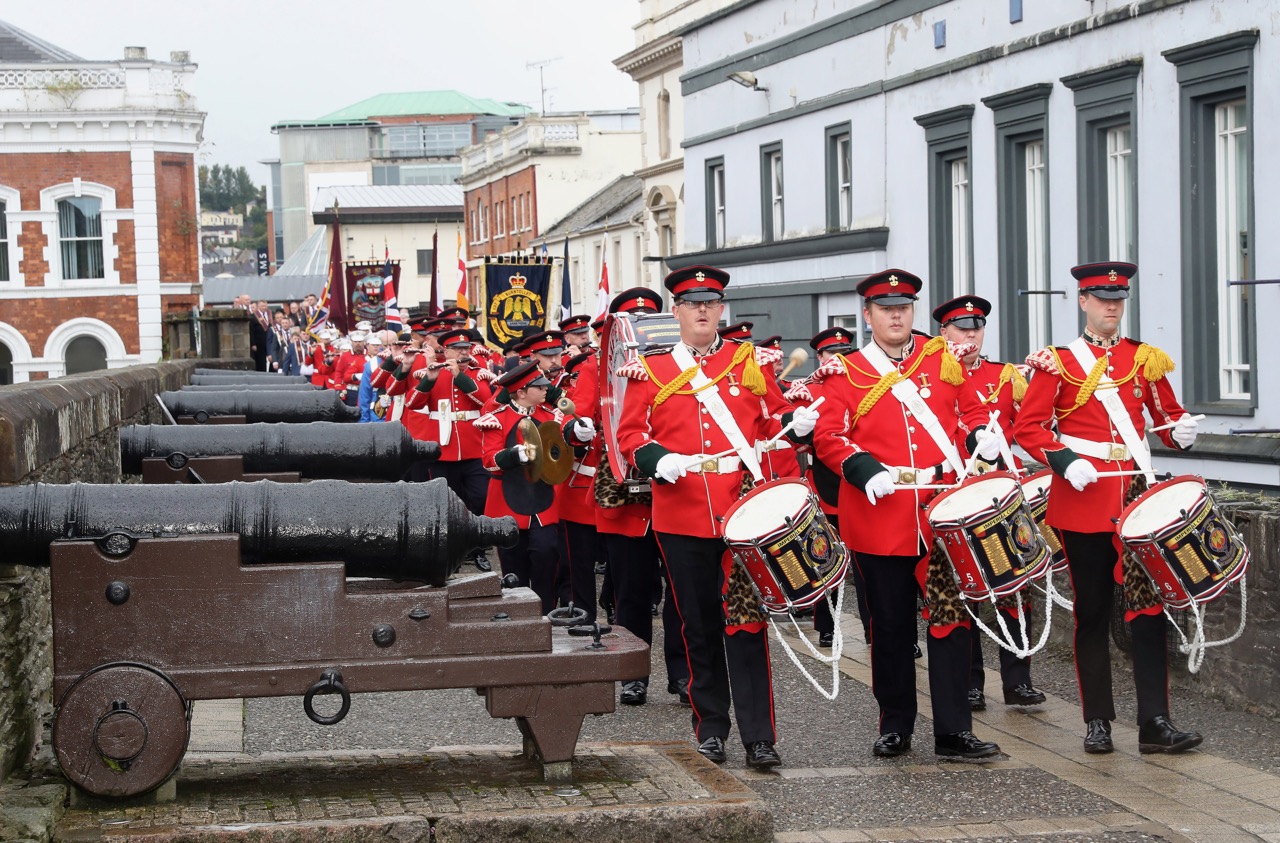 No matter how comfortable the pace and how uplifting the music, it’s a long walk on a warm day for Apprentice Boys on their Annual Parade commemorating the ‘shutting of the gates’ of the city and the historic 105-day siege.

This may go some way to explain the seemingly tired gait of Edwin Poots MLA with what resembled the drains of a bottle of water in hand, as he walked with his fellow Club members on the return section of the march.

What would you not give for a Sri Lankan helicopter on a day like this?

For spectators lounging on their foldaway chairs the spectacle is somewhat different. The air carries the aroma of the salt and vinegar on the chips from Hammy’s Fish and Chips or is it the Jukebox Diner, both mobile but, like many cars, a Barista Barand camper vans, resting stationary along the route today.

Not far away the vendors at their stalls offer myriad flags, mugs, band sticks, toy drums and tea towels alongside the customary crisps, popcorn, ice cream, chocolate and drinks. The owner of the Eurospar close by would probably prefer that all of the trade rather than just some of it, would come his way.

The more frugal have picnic baskets and flasks of tea neatly laid out on grassy areas or the gardens of homeowners who obligingly make space available to visitors. The numerous buggies on the route are laden with all that it is necessary to bring when on a day out with a young toddler, some of whom sway in the arms of parents and grandparents in rhythm with the music.

The bands, mostly flute but also accordion, in their array of colour and music embellish the crimson of the banners,unfurled in the light breeze and carried by individuals some of whom, it must be said, whilst tidy in their regalia and suits, were not born to wear ill-fitting bowlers. The portrayals on the banners remind those watching of the defiance of the population within the walls and the breaking of the boom.Colour parties at the head of some bands remind observers of more recent historical events etched into protestant and unionist folk memory.

The vivid orange of the Steeple band members and the rich purple of the Purple Guards from Magherafelt stand out against the more traditional shades of black, navy, maroon and green worn by other bands. The music is equally varied.  As the bands parade on the flag lined route and wend their wayup and down the main road eastwards to Belfast, ‘Onwards Christian Soldiers’ ‘Hold the Fort’ and other hymns favoured by many of the accordion bands contrast with ‘My Old Man’, the ‘Minstrel Boy’ and ‘Derry’s Walls.’

One band strides out briskly to ‘Killaloo’, the regimental march of the Royal Irish regiment. On their drum you can read ‘ Faugh A Ballagh.’ Gaelic, albeit anglicised, but not a problem here.

Just behind, the drummer of the Boys of the Upper Falls beats his drum to the point of bursting the skin. Perhaps, he is sending a message to listeners many miles away.

As the parade reaches its finale, the watching crowds are swollen by band members and Apprentice Boys, ice creams and drinks in hand, who have finished the march but have not yet made their way to their buses. Marshalls struggle to stop gaps developing in the parade. Spectators are beginning to pack up and make last minute purchases from the vendors.

After the last band has passed two evangelists walk on the road with a banner bearing a text from scripture and the words:” After this the Judgement….”

Maybe Edwin Poots and the other politicians on parade did not see this. Might be helpful if they did.

Social share:
Previous ArticleVoices from the Sixties Talk Back – By Peter Weil
Next Article AN OPEN LETTER TO THE LEADERSHIP OF THE DUP AND SF – OMAGH AND BEYOND – BY PEACEMAKER, THE REV HAROLD GOOD