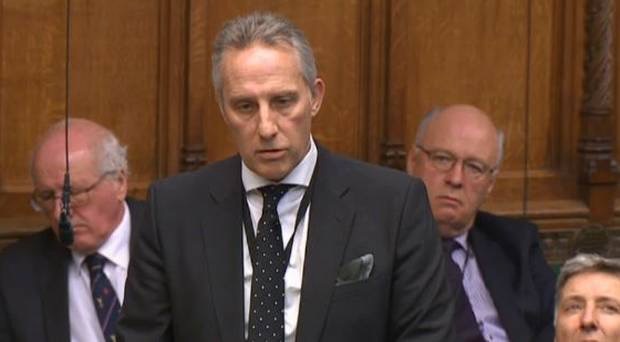 He is accused of not declaring largesse from the Sri Lankan government characterised by the Standards Committee as ‘paid advocacy.’

“What he has done is unacceptable. He needs to come clean. Ian needs to be clear to his own constituents.”

The above remarks fell this morning from the lips of outspoken DUP dissident Jim Wells who has been in the eye of the storm himself inside the DUP more than once arising out of controversial remarks he made. Mr Wells is no longer subject to the DUP whip.

Wells is correct in stating the Paisley name is a byword in North Antrim – 48 years of representation between Ian Paisley senior and Ian Junior. What now if the TUV, Sinn Féin and the SDLP force a by election as is the constituency’s entitlement if 10% of the electorate so choose?

My analysis is simply this. Any by election will see Ian Paisley returned as MP. One has only to listen to grassroots opinion in rural America in recent days to realise the rock solid support on ranches and farms for Donald Trump despite claims that he was ‘treasonous’  during his meeting with his Russian counterpart.

Just look down the road to Tipperary in the Republic of Ireland and ask yourself “in how many scrapes has former FG TD Michael Lowry found himself? Yet, he has been religiously returned as an Independent member by his loyal constituents. Touché Mr Paisley I suspect if there is a by election.

Asked about the support for Gerry Adams in his own community the late Fr Denis Faul said “neighbours don’t see him as someone with connections to the IRA. They see him as the local lad who took their child to school on the bar of his bicycle.” Doing a good turn in other words.Touché Ian Paisley Junior in North Antrim.

The morning newspaper headlines make uncomfortable reading for the DUP.

The Putin regime and the DUP have two things in common – centralisation and secrecy.

Does Ian Paisley Junior enjoy the confidence of Arlene Foster and Nigel Dodds?

Has Theresa May discussed this indiscretion with the DUP? She doesn’t have to seek her sorrows. She has enough of her own with which to deal without Ian Paisley adding to them.

In essence Mr Paisley has diminished the vote margin available to Mrs May at a very critical moment as she clings onto office by the skin of her teeth.

Who knows what else is going to fall out of the Westminster cupboard in the coming days? One has only to read the Daily Mail to observe the tenacity with which it as an organ pursues its prey.

As I pointed out earlier The DUP’s silence is deafening rightnow on this Paisley controversy with the narrative being provided by Jim Allister and Jim Wells both having been well versed in the DUP mindset.

The DUP danced on the head of SF MP Barry McElduff  over his injudicious placing of a Kingsmill loaf on his head coinciding with the anniversary of the IRA killings of Protestant workmen at Kingsmill.

The DUP got Mr McElduff’s head on a plate as desired. The Sinn Féin leadership did not ultimately stand by Barry McElduff.

Ironically The RHI investigation and the scrutiny under which Arlene Foster is, over that scheme and the vulnerability of DUP SPADS may well provide cover for Ian Paisley.

Perhaps a bible quotation is appropriate in this context:

Thou hypocrite, first cast out the beam out of thine own eye; and then shalt thou see clearly to cast out the mote out of thy brother’s eye.