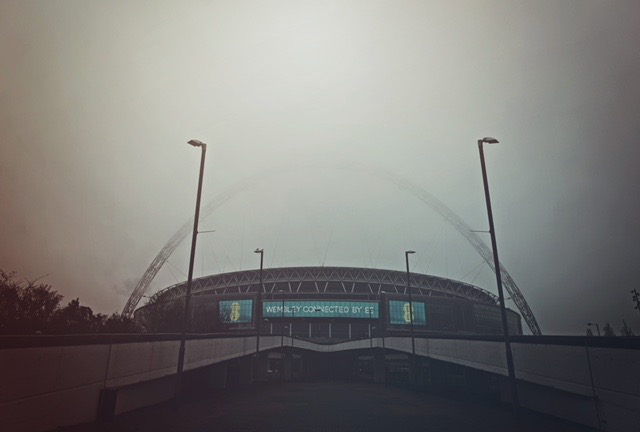 The chords are played gently; neatly in time.

A sudden sharp tingle runs up through your spine.

Delicate goosebumps dance on the skin,

Whilst smooth sweeps of strings cause a terrible thrill.

Such is the impact of the opening notes of the iconic Euro ’96 hit, ‘Three Lions’.

More popularly known as ‘Football’s Coming Home’, David Baddiel and Frank Skinner’s collaboration with The Lightning Seeds’ is simply thee best football anthem ever, Like it or not, England’s glorious elegy represents a halcyon era of football that nearly never was; of sunny days at your granny’s house; of Knock-Out Wembley… taking on the world against the red shed wall (don’t trip on the gully in the lawn).

Okay, okay, as far as football songs are concerned, the patriotic passion generated by ‘Put ‘Em Under Pressure’ would put a horse clean mad with desire as well, but, by hell, we might be waiting a while before that one’s dusted off again. North of the border, ‘Bingham’s Boys‘ (a rare little ditty, by Charlie McGettigan) would get the juices going in your wee Honda 50 any day – no less in ’86. But alas, ‘We’re on our way to Mexico’ no more. ‘We’re not Brazil…’ and we’re miles from Russia, too.

We’ve no choice but to turn, as usual, to the great English preoccupation!

There’s always powerful great glee to be had when England get bate. The joy at their last escapade, which saw them melt in the face of a cool Icelandic burn, was glorious. Lest We Forget the other fallen English dead, smote down by Maradona’s historic Hand, or poor Beckham’s boot on Simeone in France ’98. In fact, there’s no avoiding an absorption of lamentable English Word Association into our lexicon:

Such schadenfreude is only worthwhile in the earlier stages, though. “Sure if they get to the semis they might as well go all the way and win it”, plenty of people have said, more than they’d care to admit.

You could measure your life by great football memories. Where were you when the fantastic Fullerton roared for “Healy!” in 2005? Beckham’s beauties were put to the sword that heady Belfast night. Remember Roy’s Saipan sayonara? Schoolboy recollections of Robbie’s German cartwheel? We watched that one on an auld wheely TV in a cupboard.

Yet we’re all suckers for the English aura, and we love it.

It’s hardly a wonder. Growing up, a daily diet of ‘The Sun’ and ‘The Mirror’, combined with a school full of United and Liverpool fans, inevitably took its toll. Indoctrination complete. Our 4th Year History teacher even laughed at us, once:

“You’re all hypocrites, boys! Going out and supporting them English teams at the weekend; roaring about Beckham, Rio, Stevie and Rooney, and then going mad for them losing. Wise up, lads”

There’s an omnipresence about English football, always lurking… looming large in our consciousness. I’ve never missed an England friendly on ITV; forever tied to Tyldsley after he talked United home in the Nou Camp in ’99.

The unhealthy obsession (begrudging romanticism?) with those cute English hoors proves that bad habits are hard to kick, and I might need some medical help for this malaise.

“When did your troubles begin, my son?”

“The Summer of ’96, Doctor. It all started when a young boy watched Seaman spill on the floor as a big German hammered it in.”

“Oh dear! What happened next?”

“Well, I’m afraid it all went south(gate) after that.”

Of course, as we all know, football and politics wouldn’t be seen mixing together, but let’s deconstruct those iconic lyrics from 1996 once more and, this being NI, tie them seamlessly to a post-conflict narrative: “Thirty years of hurt… Never stopped me dreaming.” An ultimate message of hope… that football heals all!

So, now that the festival of football has begun, will you be giving it a right jolly old “Cam on Englannnd!”, or a firm belt of begrudgery?

Personally, I think I’ll go for Panama… ‘cos I’ll eat my hat if England win!