You are at:Home»News & Current Affairs»THE PAST – IS THE WAR REALLY OVER? – By Brian Rowan
Social share: 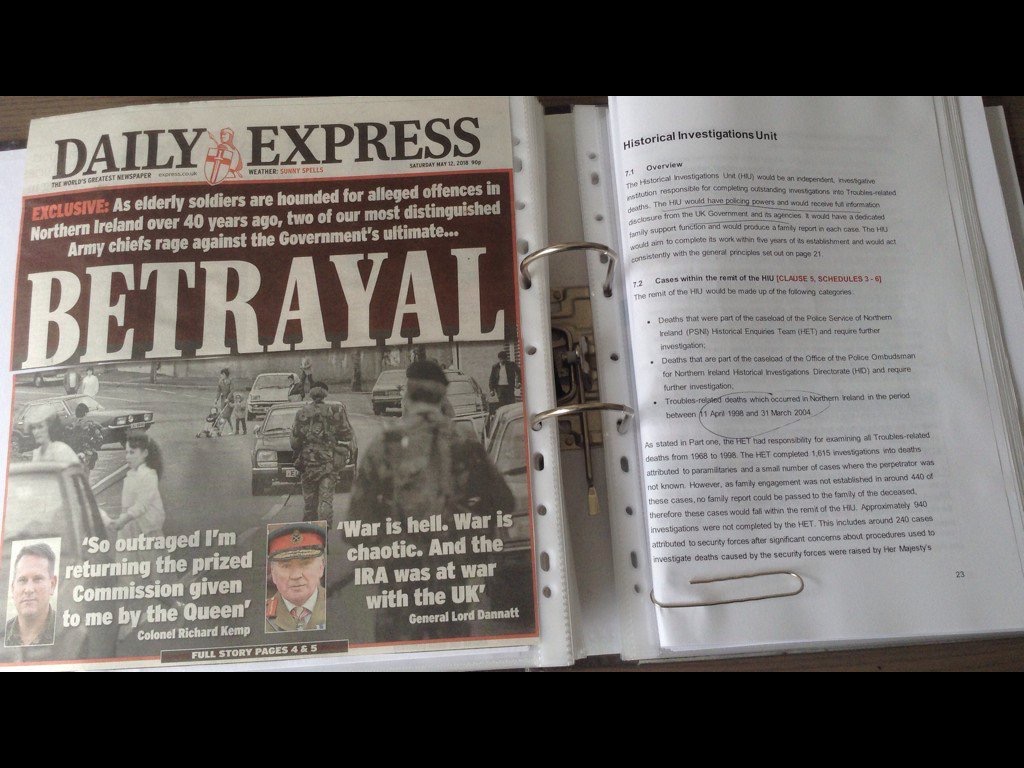 How might this period of consultation – the days and weeks to September 10th – be best used?

This is the time that will determine the next steps in the legacy process; whether what is on paper in the Stormont House Agreement should be taken forward into historical investigations and inside a new commission tasked with information-retrieval.

There would also be an archive for sharing experiences and narratives and a reconciliation element.

This is the plan, or is it?

There is another play that we read in the headlines of ‘BETRAYAL’ and that we hear in political commentary – a play to protect soldiers and other security personnel from those investigations that are part of the legacy plan.

It is called a statute of limitations, something the Prime Minister Theresa May has described as “very important”.

The proposal – what many would call an amnesty – reads back to a report by the Westminster Defence Committee in April last year and would cover the armed forces across the conflict period through to the Good Friday Agreement.

There were additional elements to the report; the government was encouraged to consider extending the proposed statute of limitations to include RUC officers and other security personnel and, after consultation, to consider whether it should apply across the board.

So, any such drawing of a line would include republicans and loyalists.

Last November a section was written into the draft legacy consultation papers inviting responses on the above under the heading – alternative approaches to addressing the past; but, after a negotiation involving the Northern Ireland Office and Sinn Fein, this chapter was removed in February.

So, there is no specific mention in the final consultation paper of a statute of limitations, but that doesn’t mean it has gone away.

In the foreword to the consultation paper, Secretary of State Karen Bradley referenced the Defence Committee, and there is also Question 14 in the consultation which asks about other views on the past.

Then, there is a comment that the Secretary of State made to the Press Association – a reference to excluding any “Northern Ireland-only” prosecution amnesty from the consultation.

What is meant by “Northern Ireland-only”?

Is it a reference to some plan to address the question of a statute of limitations in some wider frame, including soldiers who served in Iraq and Afghanistan and, if so, what would the implications be for any legacy process here?

Before a past process is put in place, Theresa May and Karen Bradley need to explain what plans, if any, there are for a statute of limitations, and this consultation period should also be used to try to establish what contributions republicans and loyalists might be prepared to make to an information-retrieval or truth-recovery process.

How do investigations sit alongside information-retrieval?

Would a prosecution amnesty across the board help an information process?

Think of that contradiction.

Addressing the past, however this is done, should not become a police or a prison or a political process or play.

It should try to deliver maximum information alongside a commitment from all never to repeat the conflict years.

Perhaps then we might all stop shovelling our experiences on top of future generations.

Is the war really over?

Social share:
Previous ArticleThe Chief Constable and the Police Ombudsman in drive to tackle ‘Legacy of the Past’
Next Article The fight against sectarianism must start within ourselves – By Dr John Kyle