You are at:Home»News & Current Affairs»Digging out the Downing Street secrets behind the forging of the 1998 Good Friday Agreement – By Eamonn Mallie
Social share: 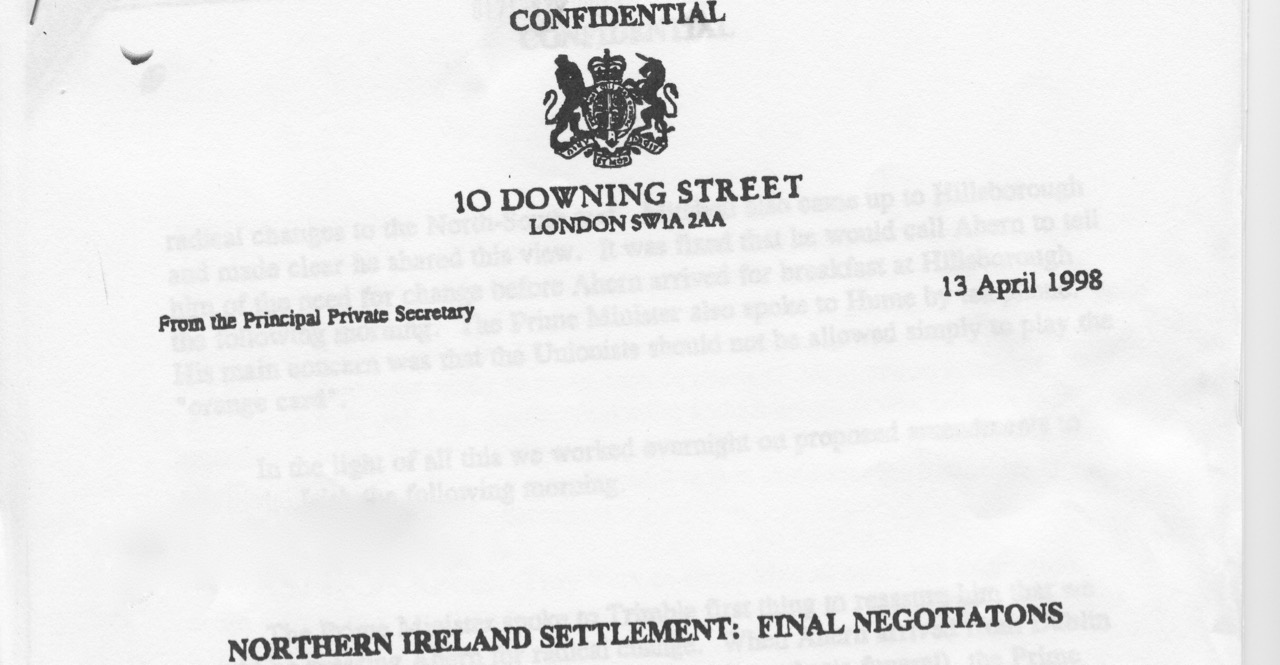 How rarely we get a chance to “feel the hand of history upon our shoulder” in the life of a country.

In a confidential memo authored by John Holmes, Principal Private Secretary to former Prime Minister Tony Blair during the making of the 1998 Good Friday Agreement we can now uniquely sit on his window ledge and share a truly history making moment – a moment which has delivered over twenty years of peace in Northern Ireland.

Holmes, blessed with good shorthand, in a secret 19 pages long document, the contents of which I am putting in the public domain for the first time, captures the extraordinary twists and turns of the vexed Good Friday Agreement Talks successfully negotiated between April 7 – April 10 1998.

The making of that Agreement, against all the odds brought to a close thirty years of violence in Northern Ireland at the hands of the IRA and Loyalist organisations responsible for the loss of over 3500 lives.

We see in this remarkable account of the making of the Good Friday Agreement the, of necessity sleight of hand actions of governments being deployed to obviate intractable problems: terms ‘fudge’ ‘concocting a letter’ and talk of the principle of “mutually assured destruction” confirmed as such mechanisms deployed by both the British and Irish governments in these intricate negotiations to reach an ultimate agreement.

John Holmes literally sat at Tony Blair’s knee from the moment he arrived at Hillsborough Castle on April 7 until that moment at 5.30pm on April 10 1998 when US chairman of the Talks, Senator George Mitchell said “I am pleased to announce that the two governments and the political parties in Northern Ireland have reached agreement.”

Holmes reveals to readers of this document ‘the supply of meeting records dried up on April 9, victim of a combination of exhaustion and the speed at which events were moving.’

Holmes penned his record of the events of those fateful days of history making on April 13 feeling he was the best placed person in any of the three governments, the British, Irish or American, or in any of the political parties to know what exchanges took place across the board.

Despite the upbeat note struck by Mr Blair on Tuesday April 7 when he touched down at Hillsborough Castle with those immortal words “a day like today is not a day for sound bites, we can leave those at home, but I feel the hand of history upon our shoulder with respect to this, I really do” – many of us considered those words would prove a hostage to fortune for Mr Blair.

John Holmes was literally standing a short distance away from Tony Blair when those words fell from his boss’s lips.

His own words reflect a sharing of our cynicism about the PM’s sentiments on the day: “the situation looked bleak as we arrived in Belfast late on Tuesday afternoon” he writes.

The reading of these nineteen pages of history from a primary source reveals the tension, the fears, the insecurities of all parties worried of being outsmarted including Taoiseach Bertie Ahern, who shared his concern with his British counterpart that he could change Articles 2 and 3, and then get nothing for it.

SDLP deputy leader Seamus Mallon made clear SDLP awareness of ‘Sinn Féin’s strategy of gobbling them up politically.’ Sinn Féin warned of the dangers of “the Orange card.”

Some elements in the Ulster Unionist party felt Dublin wanted to damage their party.

UUP leader David Trimble had to deal with his own ‘40-foot bargepole Man’ John Taylor who put his boss under considerable pressure arising out of a decision by Senator George Mitchell to insist on including in the text put on the table late on Monday night of two long un agreed annexes of issues for North-South co-operation.

This, according to Holmes had ‘pushed the Unionists over the edge.’

There was worse up ahead for David Trimble: – Sinn Féin’s desire to be in government without the IRA having given up their guns and their demand for the release of prisoners within two years of the signing of the Good Friday Agreement.

With the emerging package now in tatters and David Trimble’s camp in revolt, with Jeffrey Donaldson particularly vocal, Holmes discloses that after a difficult meeting with Trimble and his party over Sinn Féin being in government without IRA guns being given up “we ‘concocted’ a letter to Trimble making clear that, if after six months of the Assembly the present rules to promote non-violent methods had proved ineffective, we would support changing the rules to give them teeth.”

Holmes confirms the PM and his office then ‘enlisted’ Clinton’s help through a direct phone call to Trimble.

Holmes writes “the cause still looked hopeless. Suddenly at about 16:30, the picture changed again. Rumours reached us that, following the  Prime Minister’s letter and Clinton’s call, Trimble had taken renewed heart and called a vote, which he narrowly won.

Social share:
Previous ArticleMuseums and Troubles in Northern Ireland – By Kathryn Thomson
Next Article A CELEBRATION WITHOUT THE CANDLES AND THE CAKE – By Brian Rowan