You are at:Home»News & Current Affairs»A CELEBRATION WITHOUT THE CANDLES AND THE CAKE – By Brian Rowan
Social share: 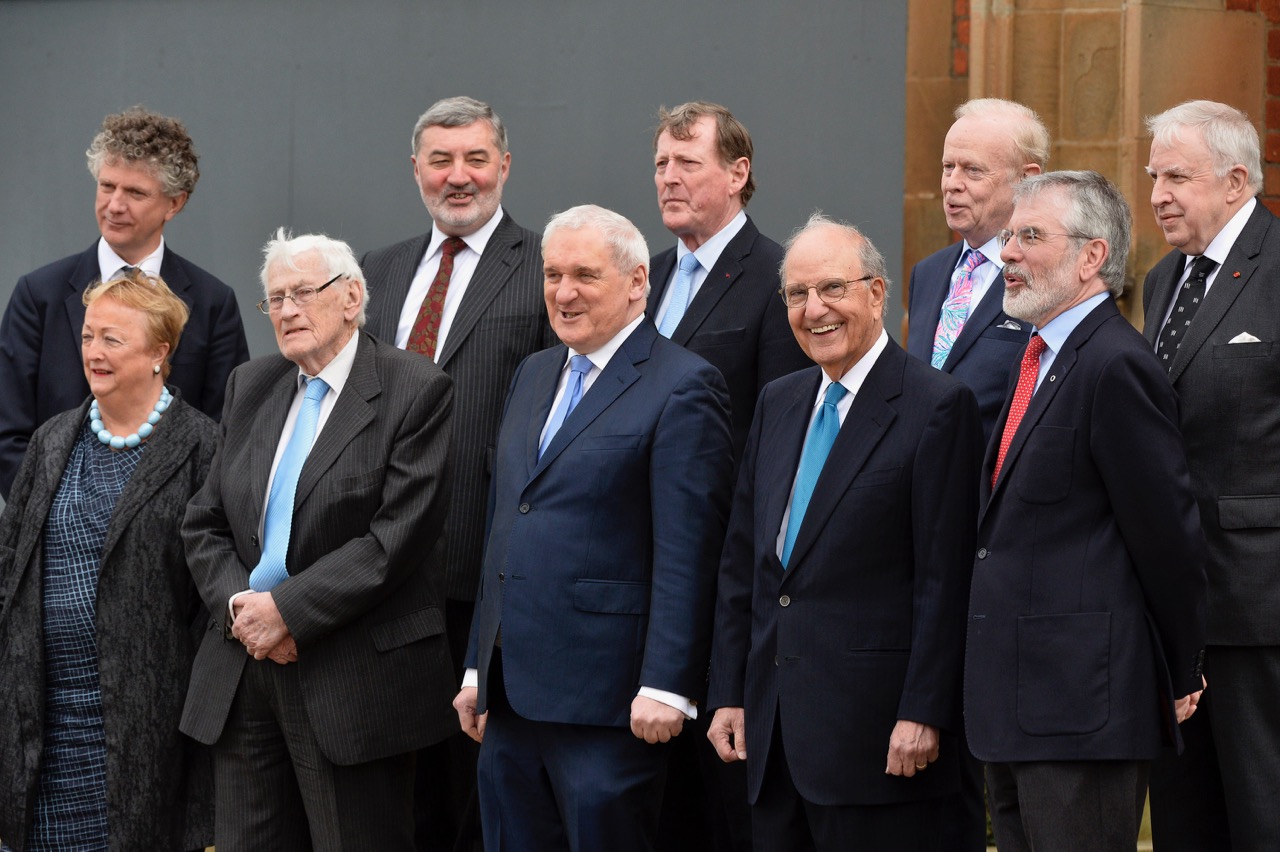 It was a birthday party with nearly all of the right guests – but spoiled by the long face that is the political failure and fallout that has stretched into this important anniversary year.

On Tuesday, Belfast played host to some big-name guests; those who helped shape the political agreement of Good Friday 1998 – among them President Clinton, Senator George Mitchell, and then Prime Minister and Taoiseach Tony Blair and Bertie Ahern, but this 20th anniversary arrived at the wrong time.

A time when the institutions that are the centrepiece of that agreement have crumbled.

There is no Government – and for 15-long-months, politics at Stormont has been stuck in the mud.

David Trimble, Seamus Mallon, Gerry Adams, Monica McWilliams, Mark Durkan, Lord Empey and Lord Alderdice were in the photocall for the Class of ’98, but others were missing, including representatives of the loyalist parties who helped in the making of that agreement.

In an interview with Mark Carruthers on The View on Tuesday, Trimble’s then Press Secretary David Kerr took us inside the decision-making room of the Ulster Unionist Party those twenty years ago; the locked door, the various concerns and the important contribution of Ken Maginnis.

Trimble also needed the cover and the comfort of the presence of the small loyalist parties – there to help shoulder the weight of the heavy lifting.

David Ervine Gusty Spence and William ‘Plum’ Smith are no longer with us, but Gary McMichael, David Adams, Dawn Purvis and Billy Hutchinson would not have looked out of place in that photocall and picture frame on Tuesday that remembered 1998.

Earlier that day, at a conference at St Mary’s University College on the Falls Road, Gerry Adams reminded us of the political standoff those 20 years ago: “It is worth remembering the Good Friday Agreement was achieved without the Ulster Unionist Party talking to Sinn Fein. The DUP didn’t even turn up,” he said.

Adams remembered the contributions of David Ervine and the loyalist parties.

When you read back and listen back into that period two decades ago, it is remarkable that they managed to get that agreement over the line.

Among the many words spoken and written in the days between Good Friday and the May referendum those 20 years ago are two statements – one from the UDA, the other from the IRA.

The continuing doubts and concerns were obvious. 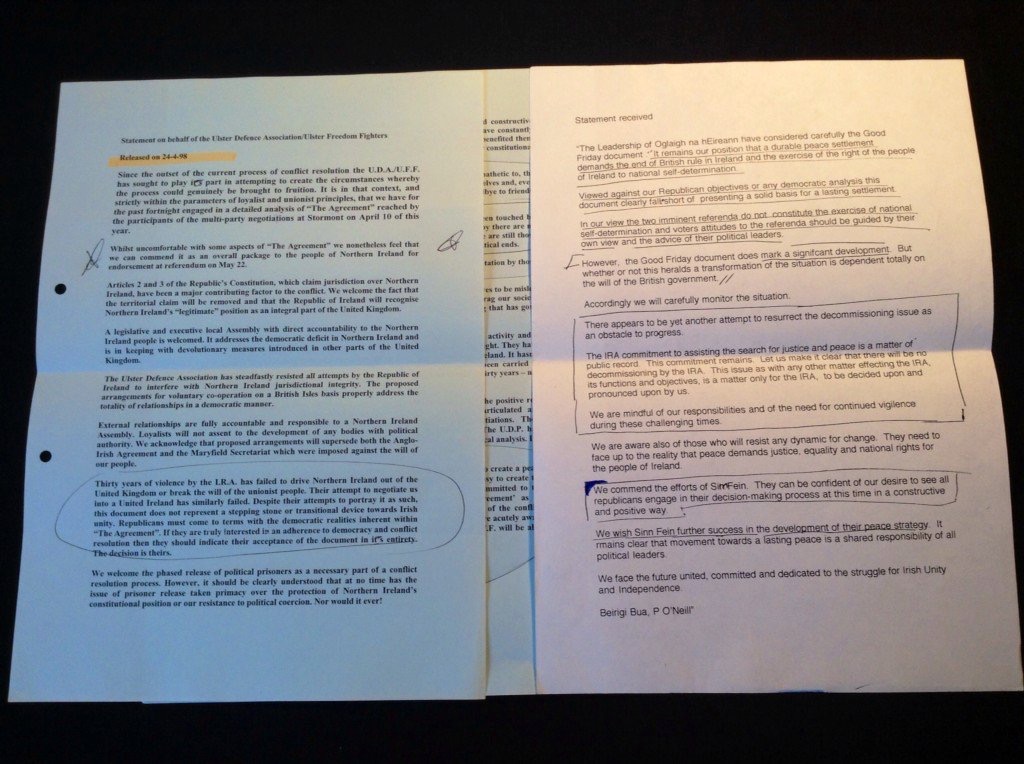 The IRA again ruled out decommissioning.

The UDA while “uncomfortable with some aspects of the agreement” nonetheless commended the Good Friday package for endorsement in the referendum, but its closing thought in a two-page statement described “the difficulties and dangers that may still lie ahead”.

For years after the agreement, decommissioning was a political battle and, still in 2018, the issue of addressing the legacy of the conflict years is unresolved.

At that Feile an Phobail organised event in west Belfast on Tuesday, in a panel discussion chaired by the Irish News correspondent and commentator Allison Morris, loyalist Winston Irvine spoke of “a moral imperative to deal with the past if not a political one”.

“We need to deal with the past, so that we can leave our children with a better future,” he later told this website.

Irvine was adding a thought to a loyalist statement released on Monday in the names of the Red Hand Commando, the Ulster Defence Association and the Ulster Volunteer Force – the three groups that were the Combined Loyalist Military Command of the ceasefire period those two decades-plus ago.

This week, those organisations re-committed themselves to the peace process, offered full support for the rule of law and condemned criminality.

“We also recognise the importance of a legacy process designed to help Northern  Ireland confront the past and from that experience build a society of possibility and hope.”

Gerry Adams welcomed that loyalist statement: “Some may be sceptical, but we have a duty to support all positive initiatives,” he said.

The Sinn Fein TD repeated that the IRA has gone and the war is over.

On Tuesday, Monica McWilliams – in that panel conversation with Allison Morris – also remembered the critical role played by then Secretary of State Mo Mowlam in 1998, as well as  describing the late efforts to ensure that victims and their needs were recognised in the agreement.

In 2018, the legacy and political battles continue; there is little prospect of devolution being restored in the short term and nor has there been any move yet to convene a meeting of the British Irish Intergovernmental Conference.

How can Dublin and London lift this process out of its present mood and gloom?

This is today’s challenge.

Twenty years after Good Friday 1998, the celebration of that moment happened without the candles and the cake.

Social share:
Previous ArticleDigging out the Downing Street secrets behind the forging of the 1998 Good Friday Agreement – By Eamonn Mallie
Next Article POLITICS – “NOTHING’S GOING TO HAPPEN”… – By Brian Rowan