You are at:Home»News & Current Affairs»STORMONT CHRONOLOGY: TO THE CUSP OF COMPROMISE & THEN COLLAPSE – By Brian Rowan
Social share: 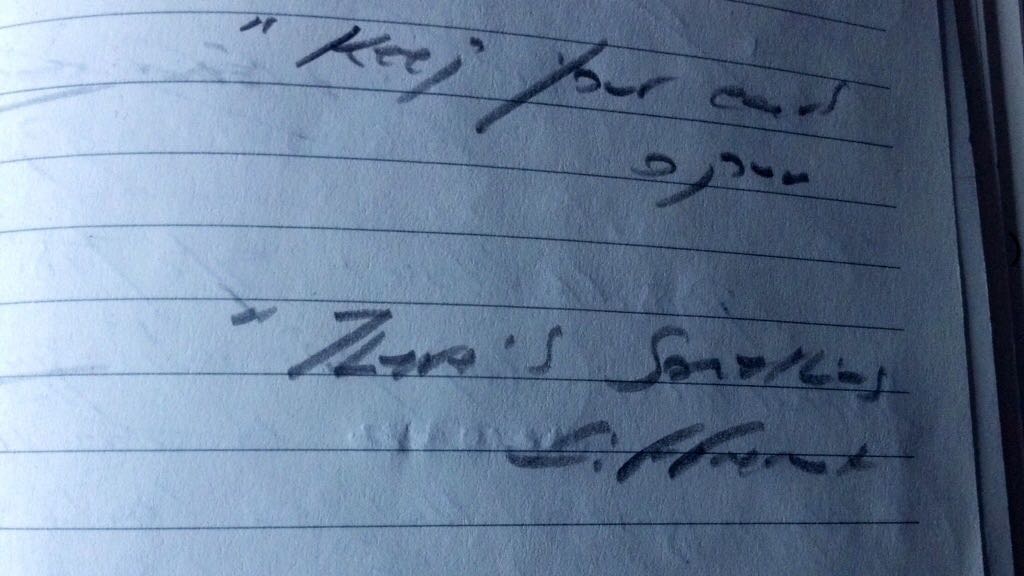 My scribbled notes of the past three weeks or so are the story of a negotiation brought closer to the point of agreement than at any time since the resignation of the late Martin McGuinness in January 2017, only for those talks to then disintegrate in acrimony and argument.

That scribbled note above is from February 8th – a late call to me that night after the first upbeat assessment of this negotiation was published hours earlier in the Belfast Telegraph.

Identifying the source of that newspaper briefing would give us some better understanding of just how close to agreement the big Stormont parties were at that time.

Was it the DUP?

We don’t have the answer to that question.

The advice given to me hours later was: “Keep your ears open. There’s something different.”

In this call, I was told if an agreement was closed there would be an Irish Language Act – the issue of marriage equality had not been resolved.

That same night BBC Political Correspondent Enda McClafferty on ‘The View’ reported Prime Minister Theresa May on standby and prepared to travel here if needed. 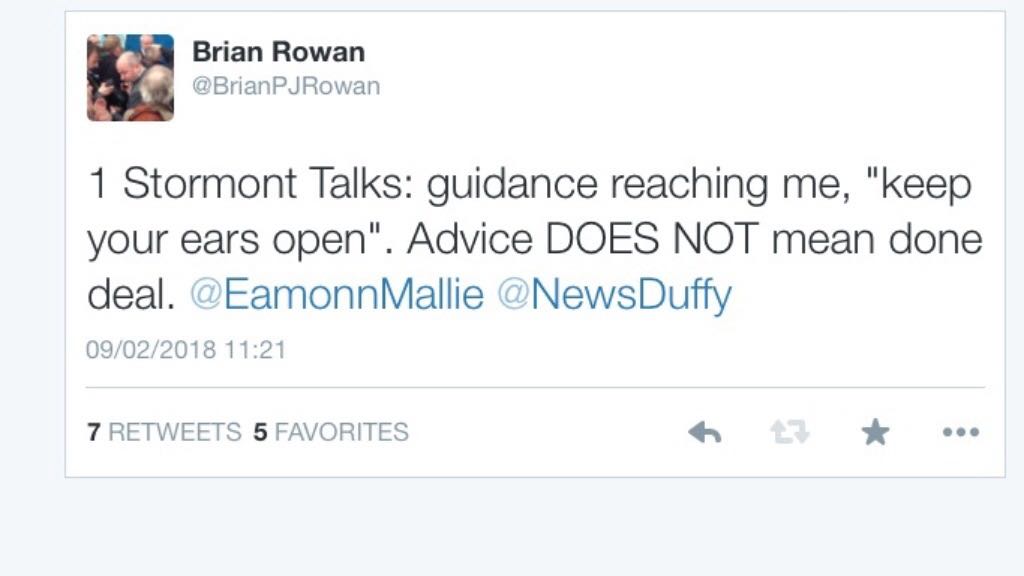 Twenty four hours later, there was “something different” about Stormont – this near-lifeless building was breathing again.

That Friday morning, I had a quiet conversation with someone inside Parliament Buildings and felt confident enough to tweet the “keep your ears open” advice.

By lunchtime, there was a picture developing; Secretary of State Karen Bradley in the building, senior NIO officials Sir Jonathan Stephens and Mark Larmour, the Irish Government delegation, Arlene Foster with party colleagues and at other tables many of the Sinn Fein MLAs and MPs.

There was a busyness about the place – a different pace to things; the sense of a better mood: “Sinn Fein pushing for it [a deal]today,” a source told me.

By mid-afternoon, the SDLP, Ulster Unionists and Alliance were stood-up – the DUP and Sinn Fein absent from a planned all-party meeting and the two governments left to explain.

This negotiation was in a better place. Yes, there was still talk of “significant gaps”, but also a view that perhaps more progress had been made than was being publicly declared.

(My colleague Eamonn Mallie would on February 20th obtain a hard copy of what is being called a Draft Agreement Text plus correspondence which is key to understanding how the negotiation developed into the evening of February 9th. I will deal with this in more detail as this chronology develops.)

On this date, on this website we set out a “ballpark” of  the DUP/Sinn Fein discussion.

If agreement was reached Arlene Foster would be First Minister. This was no surprise, but something privately understood from the summer of 2017

In the event of a resignation at the top of the Executive, there would be a longer period of time – perhaps stretching into months – to resolve differences. This making the political institutions more stable.

We reported “talk” of three separate Acts – An Irish Language Act, An Ulster Scots Act and a third covering Culture and Respect.

On legacy, separate from the planned consultation on the Stormont House Agreement, I reported: “We watch to see if funding is released for legacy inquests and who releases it.” I was told this was a continuing discussion.

Marriage Equality may involve a private members bill and there was still some talk of a review of the Petition of Concern.

On the above, I was told: “The mice could still get at it.”

(The document obtained by Mallie on February 20th would confirm the detail of this “ballpark” assessment nine days earlier.)

As well as the detail above, what began to emerge on February 11th was the level of concern inside the DUP among senior elected representatives. 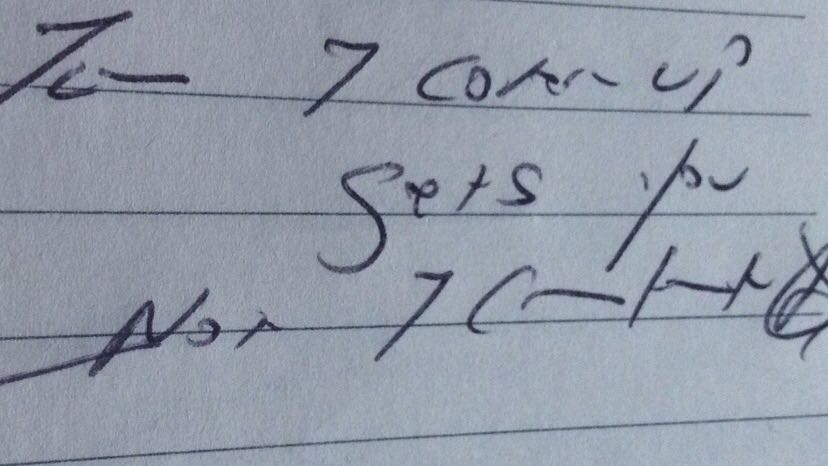 “THEN THE COVER UP GETS YOU – NOT THE CONTENT”

In the languages strand, some were still seeing the Irish element as standalone. Any attempt to present it differently “wouldn’t survive five seconds on Nolan”, a senior DUP source told me.

“Then the cover-up gets you – not the content,” he added.

On the possibility of an agreement, another senior DUP elected representative commented: “Whatever happens, it just can’t be bounced on people.”

Theresa May and Taoiseach Leo Varadkar would be at Stormont the next day. No one had signed on the dotted line – there was work still to do, gaps to be closed, but the document and correspondence later obtained by my colleague Eamonn Mallie would demonstrate just how advanced this negotiation was.

The sense that Monday was of the air getting out of  the tyres – that this negotiation was losing the momentum and speed of recent days. It was being slowed down by the DUP. Many of their members were in the dark in terms of the detail of this negotiation.

Tanaiste Simon Coveney and British Secretary of State Karen Bradley were not due back for several days. The DUP and Sinn Fein had not met. There was something wrong 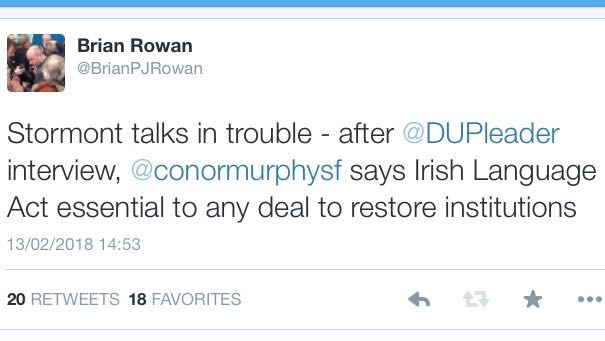 On Tuesday DUP leader Arlene Foster did a round of interviews including telling UTV’s deputy political editor Tracey Magee that a standalone Irish Language Act would be a “deal breaker”.

Sinn Fein negotiator Conor Murphy responded: “However they want to describe it, the DUP know that agreement requires an Acht Gaeilge.”

That morning a senior DUP source – one of those who had spoken to me those few days earlier – described the Stormont talks as “dead – totally dead”.

Hours later, after Arlene Foster collapsed the negotiation – the same source sent me a two-word text: “Told you” – the time of that message 16.56, 56 minutes after a tweet on the account of the DUP leader, stated: “In our view, there is no current prospect of these discussions leading to an Executive being formed.”

For something to have died, it had firstly to be alive. This negotiation had been taken to the cusp of a compromise before this collapse. The fear on that weekend beginning February 9th had been well founded. The mice had got at it.

At a Stormont news conference, Sinn Fein President Mary Lou McDonald outlined a “draft agreement” she said her party had reached with the DUP late the previous week.

In its detail, it confirmed much of what had been reported on this website. It also described as “separate” a commitment from the British Government to put to consultation the legacy mechanisms agreed at Stormont House [2014] and to release the funding requested by the Lord Chief Justice for inquests.

I am told that draft agreement is 13 pages long and, separately, in a text message, I am advised that in the context of “an overall agreement” the British Government had also committed to removing the question on the controversial statute of limitations from the legacy consultation.

Mallie and I publish two detailed reports on this website on this date, including these opening lines from Eamonn: “The ‘Draft Agreement’ document Mary Lou McDonald held in her hand on Thursday at her press conference was sent to Sinn Fein by the DUP. The document arrived with Sinn Fein late on Friday night February 9, and it included a self contained ‘Irish language Act’.”

In the back and forward of this long negotiation this was the latest iteration. It took the DUP several days to confirm that description – this in an interview Sir Jeffrey Donaldson gave to Mark Carruthers on The View on February 22nd, 48 hours after the talks paper was obtained by Mallie.

This was the date Mallie got his hands on the February 9th document. It was indeed 13 pages long. It included those three strands on Irish Language, Ulster Scots and Respecting Language and Diversity – the three pillars that could not be made into one no matter how hard they tried within this negotiation.

There is an obvious question:

If they were not separate,distinct, individual, independent why then would Arlene Foster have felt the need to do that round of interviews on February 13th ruling out a standalone Irish Language Act and describing it as a deal breaker?

You can see in an image above, that correspondence obtained by Mallie from February 9th shows the parties communicating under the heading DRAFT AGREEMENT TEXT.

The above is the calendar of dates and contacts as Mallie and I pieced this jigsaw together.

In the days since, another argument has opened out on the question of the legacy agreement Sinn Fein says it has with the Northern Ireland Office – an agreement on consultation, the removal of that additional question on the statute of limitations and inquest funding.

In a text on Saturday February 24th, I was told that funding was to be released over the forthcoming financial year – again “in the context of overall agreement”.

The DUP disputes what Sinn Fein is saying. The Northern Ireland Office ignored the specifics in questions I put to them on Monday February 26th.

I am told if “hardy comes to hardy” there is documentation.

Consider the sequence and detail set out here, and ask yourself this question posed by Mallie on February 26th: Why had the DUP not gutted this political construct?

He then answered his own question: It didn’t – because it was complicit in shaping it.

There will be those who will be hoping that much of the above will now get lost in the blizzard of Brexit.

It won’t. If there is to be another negotiation – the draft agreement text, the annexes – including detailed draft legislation for the languages package – and the disputed separate commitments on legacy will all come back into our vision.

This negotiation was a page turn away from agreement when the DUP folded.

Social share:
Previous ArticleBritain and Ireland’s European Question – By Bernard Conlon
Next Article DUP account of Talks – not stacking up – By Eamonn Mallie and Brian Rowan