You are at:Home»News & Current Affairs»STORMONT: POLITICS IN THE HEADLINES AND HEADLIGHTS – By Brian Rowan
Social share: 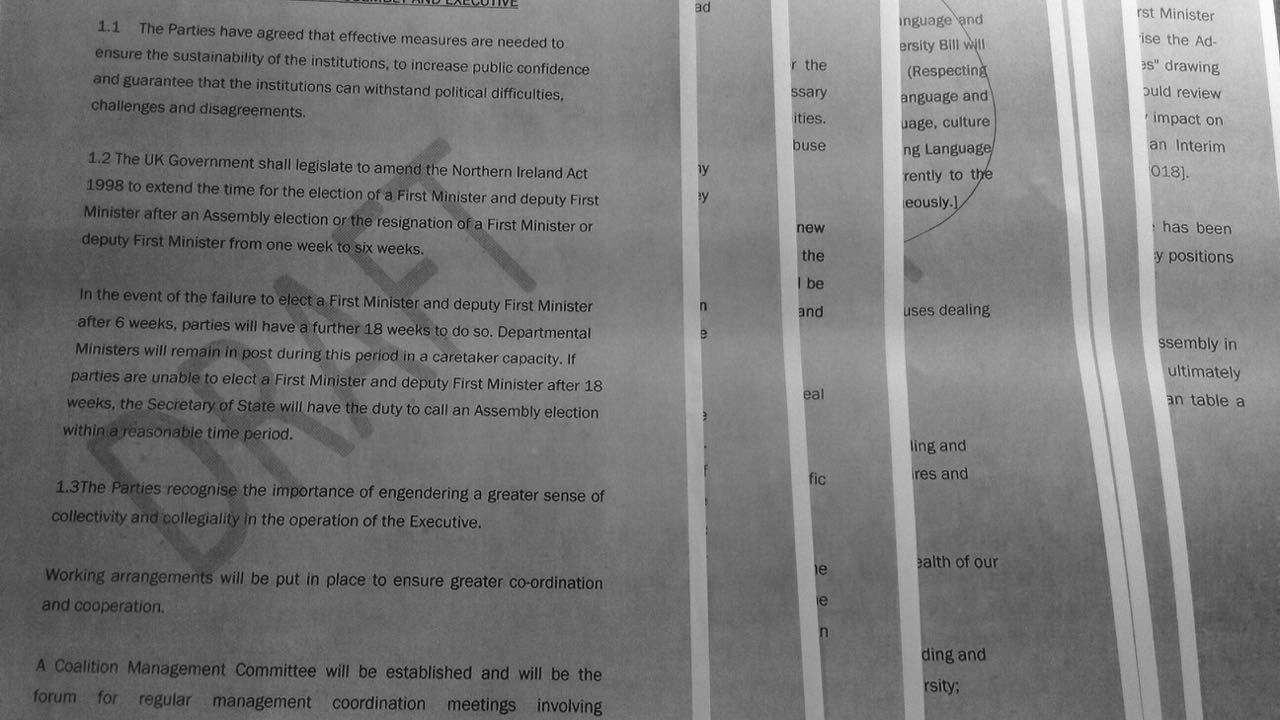 I listened very carefully to Arlene Foster on Wednesday – and noted her words.

The DUP leader was commenting on the talks document published on this website on Tuesday; the document that took us inside some of the detail of this 13-months-long negotiation.

“We weren’t contemplating bringing in an Irish Language Act and I couldn’t be clearer in relation to that,” she said.

I was particularly interested in her description of the 13-page talks document published on eamonnmallie.com; the document that has been the detail of news and headlines since.

The “so-called draft agreement” was how the DUP leader described it on Wednesday – “only one of a number of documents that were circulated, put out and about”.

In this negotiation, the latest document becomes the most relevant and “out and about” is a rather loose description.

INSIDE THE TIGHTEST OF CORDONS

These papers were inside the tightest of cordons; restricted to the DUP and Sinn Fein negotiators. The two governments were involved, but not across all the detail – not until recent days.

So, the document published elsewhere on this website is not just “one of a number of documents”. It is the February 9th paper that gave rise to hopes of a deal.

On that same date, inside the DUP and Sinn Fein, there is correspondence referencing “draft agreement text”. There is no description of “so-called”.

That document links to annexes, including draft legislation for the Irish, Ulster Scots and Respecting Language and Diversity Bills – that draft legislation spread across about 20 pages and scrutinised and agreed line by line.

The February 9th paper was not “out and about” – certainly not outside that tight talks cordon until my colleague Eamonn Mallie got his hands on it on Tuesday, February 20th.

Before then, he and I had used our sources to piece together an information jigsaw.

See our reports on this website on Saturday February 17th – a detailed analysis on the headlines of the draft agreement; an analysis confirmed in the document now obtained.

There is comfort in having that paper; it takes us beyond our notes and sources to the point of having and being able to produce a detailed reference point.

On Tuesday, we wrote the story of the document in the quiet corner of an ice cream shop.

Firstly, writing it in longhand, then typing it into my phone, then photographing the paper.

Mallie’s phone ran out of juice. He offered to buy the shop’s charger but, instead, had to settle for borrowing it.

The young lad behind the counter told us that he is studying politics.

Unknown to him on Tuesday, he was watching the putting together of one of those news reports that, within minutes of breaking, has politics in the headlines and headlights.

By the time Arlene Foster and Michelle O’Neill left Stormont on the evening of Friday February 9th, that 13-page document, and the wider detail in its annexes, had been developed  to an advanced stage. Perhaps a page turn away from a deal.

In his latest blog for the Belfast Media Group, Gerry Adams again makes reference to a draft agreement with the DUP to restore the political institutions.

He accepts that there were still “some matters” to be signed off, but that the negotiation had reached the point where it was “make your mind up time”.

“The DUP leader went off to consult with her party,” Adams writes. “A few days later, she pulled the plug.” 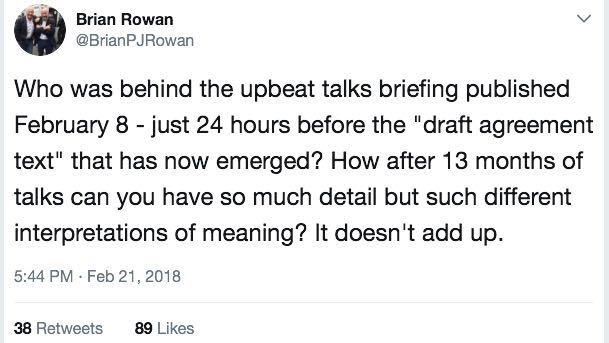 That weekend beginning February 9th was the critical period for this negotiation.

Remember that 24 hours earlier, the Belfast Telegraph had published the first upbeat assessment of these talks.

Who was behind that briefing? It now seems its timing was linked to the February 9th document being processed and progressed to the cusp of an agreement.

As the weekend developed, the stories of the planned visits of Prime Minister Theresa May and Taoiseach Leo Varadkar began to emerge.

They would be at Stormont on Monday February 12th.

WE HAVEN’T DONE ANYTHING TO PREPARE PEOPLE 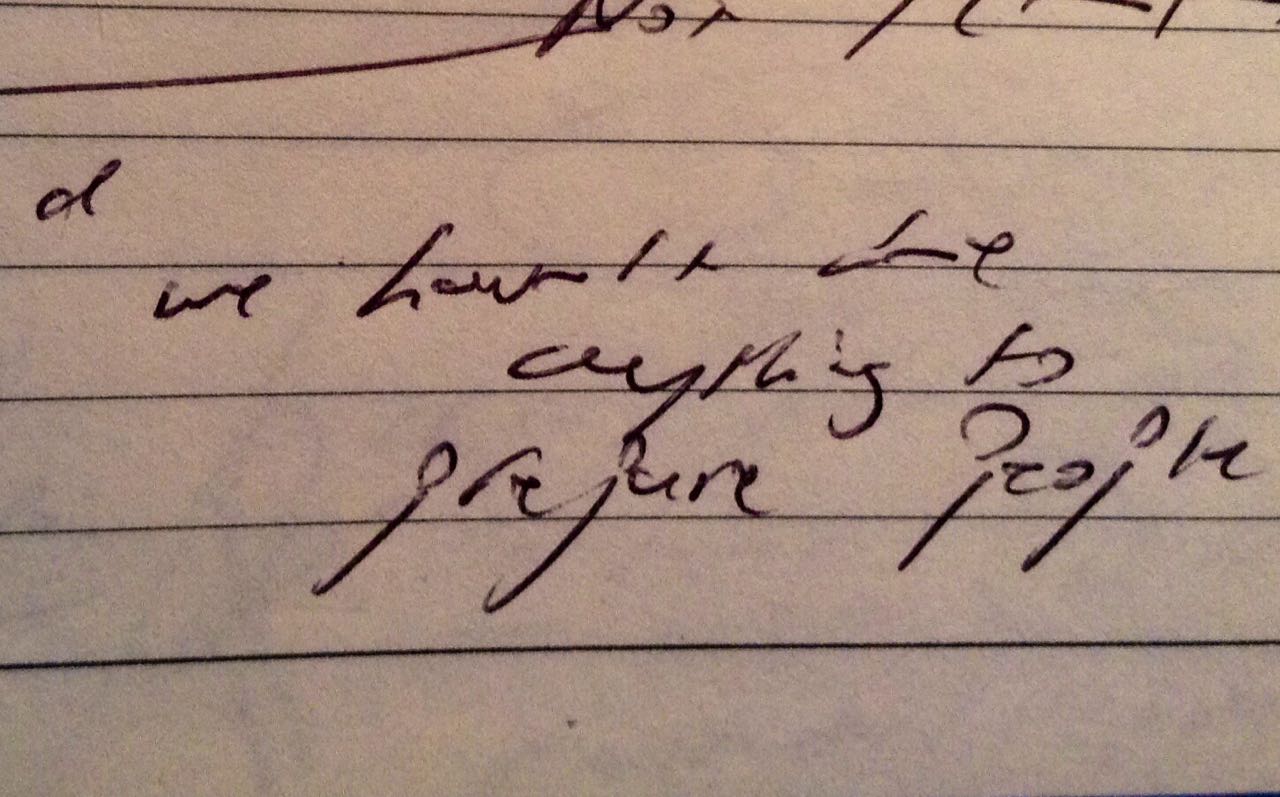 What also became evident that weekend was the concern among some inside the DUP on the languages strand of this negotiation. However it was dressed up or packaged, they were still seeing a stand-alone Irish element.

Senior DUP sources were telling me that the party had not prepared people for a deal.

On the question of the Irish language, one said there had been “no preparation for a climb down”.

That weekend, that February 9th document, that “draft agreement text” were not the usual in terms of this negotiation. There was a very different expectation.

Sinn Fein believed it was very close to a deal with the DUP. Now, there are questions.

If there is another negotiation, with whom do Sinn Fein negotiate?

Who in the DUP can carry & deliver a deal?

Their MLA negotiating team could not achieve that result.

So, another phase of this negotiation has ended in failure – to quote one source, in another “debacle”.

So close and yet so far.