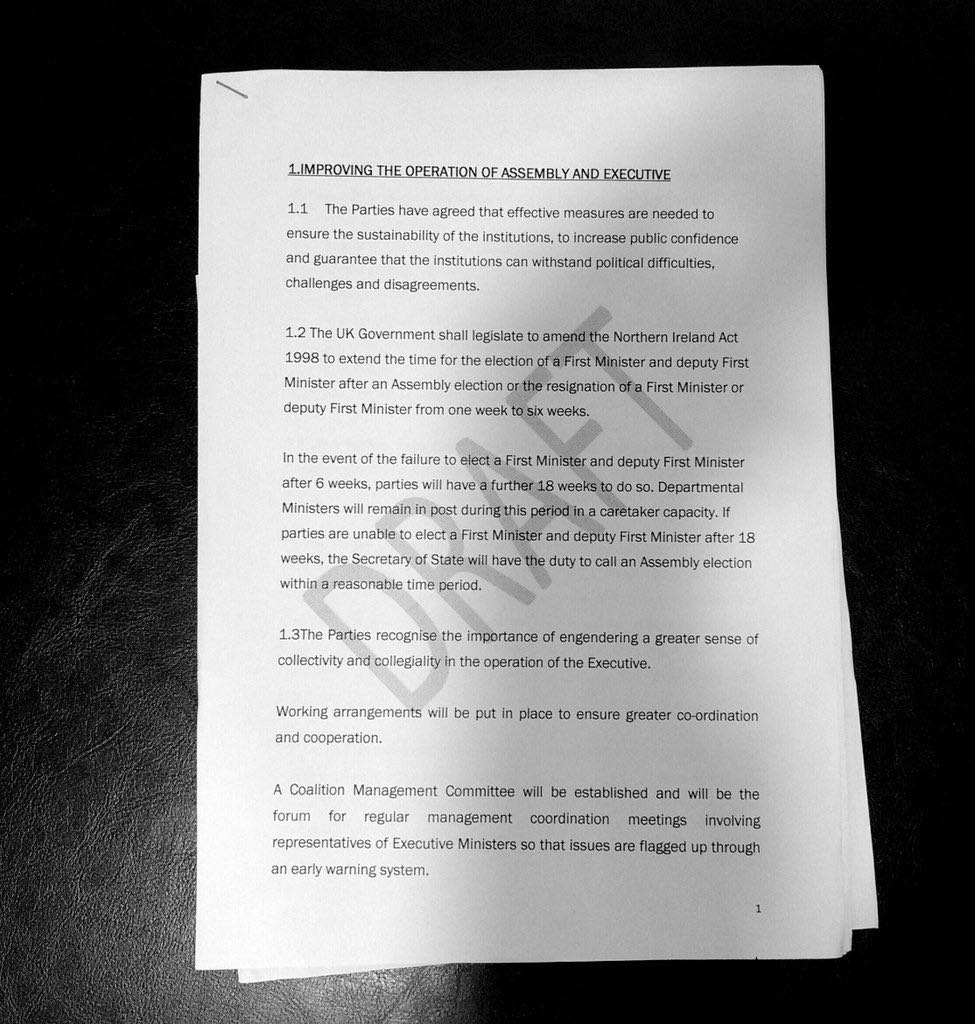 This website has obtained a copy of what is repeatedly described as ‘Draft Agreement Text’ between the DUP and Sinn Fein.

The document habitually references “the parties…”. It is the draft paper that gave rise to hopes of a breakthrough deal on the weekend beginning Friday February 9th.

It confirms many of the details exclusively revealed by Eamonn Mallie and Brian Rowan on this website last weekend.

We headlined: a document of a dozen pages or more, plus annexes and separate commitments. The document now obtained is 13 pages long with additional annexes.

It has to be stated that square brackets obtain in this eight-line paragraph – meaning it had not yet been signed off and agreed.

The document spells out that draft legislation is in an annex.

It says: “the legislation will be introduced concurrently to the Assembly and will pass through the legislative process simultaneously.”

Sinn Féin insists that at the end of this process the three bills become three Acts.

The DUP has repeatedly made clear it will not accept a stand alone act.

On Saturday this website revealed new proposals to prevent an early collapse of the political institutions in the event of a resignation at the top of the Executive.

We reported a new agreement would afford an initial period of six weeks and an additional period of some months. The text stipulates this would be a further 18 weeks.

Separately there is confirmation of a review of the Petition of Concern.

In the event of an agreement, a Coalition Management Committee was to be established – an early warning system to flag up any issues.

The draft agreement deals with priorities for the incoming Executive – not yet finalised but focused on health and Brexit.

This website has definitive proof that on Friday evening February 9th named senior Sinn Fein and DUP personnel were corresponding​ under the heading ‘Draft Agreement Text.’

This included members of the DUP negotiating team.

So, there were pages of fine detail by February 9 but just five days later the talks had collapsed.

How could there have been such misunderstanding at such a late stage?