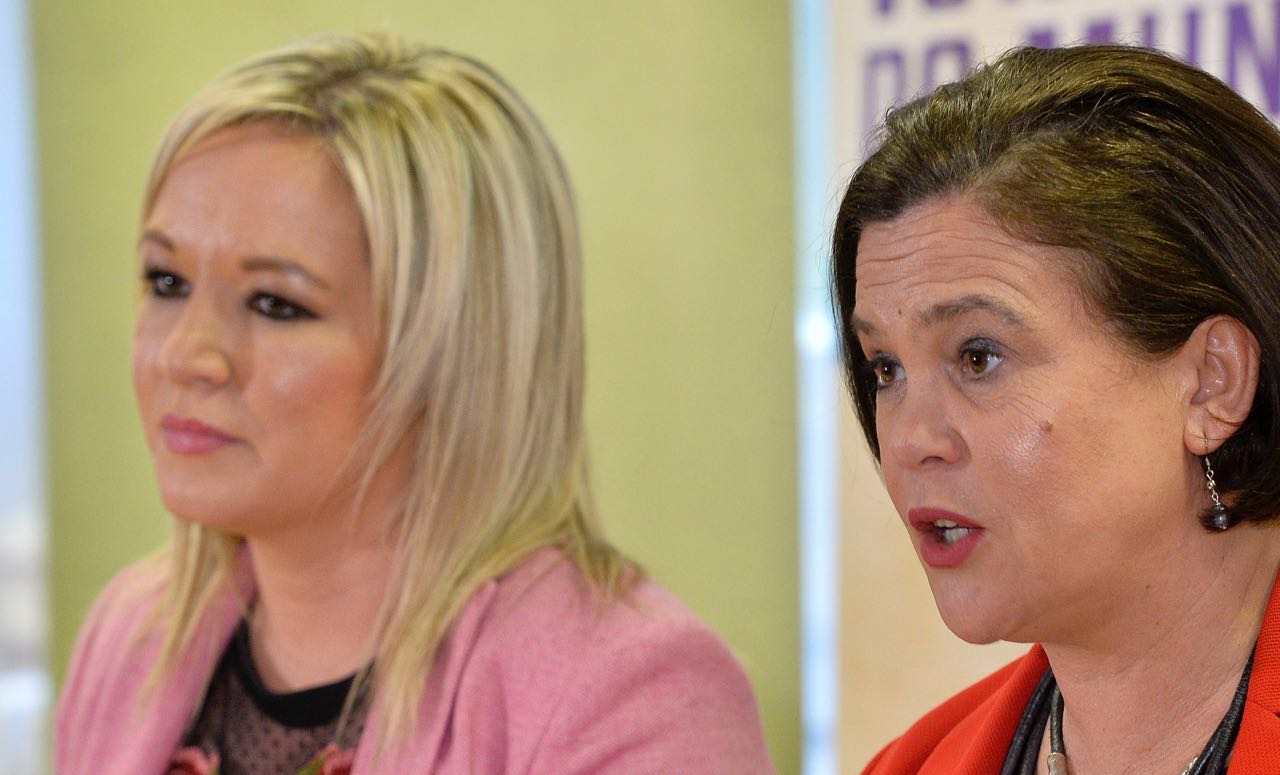 The ‘Draft Agreement’ document Mary Lou McDonald held in her hand on Thursday at her press conference was sent to Sinn Féin by the DUP.

That document arrived with Sinn Féin late on Friday night February 9, and it included a self contained ‘Irish Language Act.’

That draft agreement was the culmination of a slew of versions exchanged between Sinn Féin and the DUP negotiating teams. A detailed trace of this backwards and forwards is in place for the record.

That draft agreement document forwarded to Sinn Féin by the DUP was what is known in government parlance as the outworking of an ‘iterative process’ – the end product of refining and finessing of opposing positions in a single text. (An iterative process should be convergent, i.e., it should come closer to the desired result as the number of iterations increases.)

The document had been drafted and redrafted, amended and re-amended over and over again as a result of exchanges by email, texts and face to face meetings involving a variation of one on one and several members of the respective DUP and Sinn Féin representatives coming together.

When the Sinn Féin DUP teams had identified the differences between the parties which triggered the collapse of the administration over a year ago these problem areas were committed to a working text to be addressed by representatives of the parties.

Unresolved matters were highlighted inside brackets which would look like this: [ …….. …….. ] (This is not specific to party draft agreement document but an exemplar).

As each issue is resolved through negotiation the square brackets are removed.

By the time the DUP’s final version of the draft agreement reached Sinn Féin all the ‘square brackets’ inside the thirteen/fifteen pages long document had disappeared.

Certain matters, such as a choice of language which ought to be used to best give expression to a subject remained highlighted, sometimes emboldened in print in the DUP document, now with Sinn Féin.

All the ‘heavy lifting’ had been done on the big issues. To repeat … the square brackets around all the contentious issues had disappeared in this draft agreement document.

The draft agreement covered all of the structures to be put in place and that included the draft bills forming the basis of the legislation necessary for the realising of the Language Acts which would come into being simultaneously.

Each act is envisioned to reference the other but any one of the single acts would be freestanding and self contained.

It can be revealed here that The Acts provide for extensive devices to support the use of the languages.

Included in the new structures would be ‘a central translation hub’ for the Civil Service and an instant ‘translation service’ for proceedings in the Assembly.

In other words, the Architecture, Provisions for the Language Acts and the appropriate structures had all been agreed.

The two governments were ‘fully sighted’ of the contents of the draft agreement.

In fact conversations had by then moved onto ‘restoration’ of the institutions with the necessary draft legislation relating to the bills leading to the establishment of the three language acts having been put to bed.

Buoyed up by these developments Prime Minister Theresa May was advised by her officials it would be appropriate for her to be at Stormont last Monday.

A British administration insider said “it is inconceivable the PM would have considered coming to Parliament Buildings if she did not believe a deal was in the offing. ”

By last weekend this website courtesy of Brian Rowan was spelling out some of the meat, including details of the three Acts in the package coming through as a result of remarkable efforts by the negotiating teams.

Last Saturday week morning, a DUP insider advised me he had been in the company of several DUP MLAs the previous night and they had not a clue about what was coming down the line.

This ignorance obtained too for a number of MPS. The DUP negotiating team of Arlene Foster, Simon Hamilton, Edwin Poots, Timothy Johnston and Philip Weir were playing their cards very close to their chests – mindful that there is a cross over between some of the negotiators and the 10 strong Party Officers team. 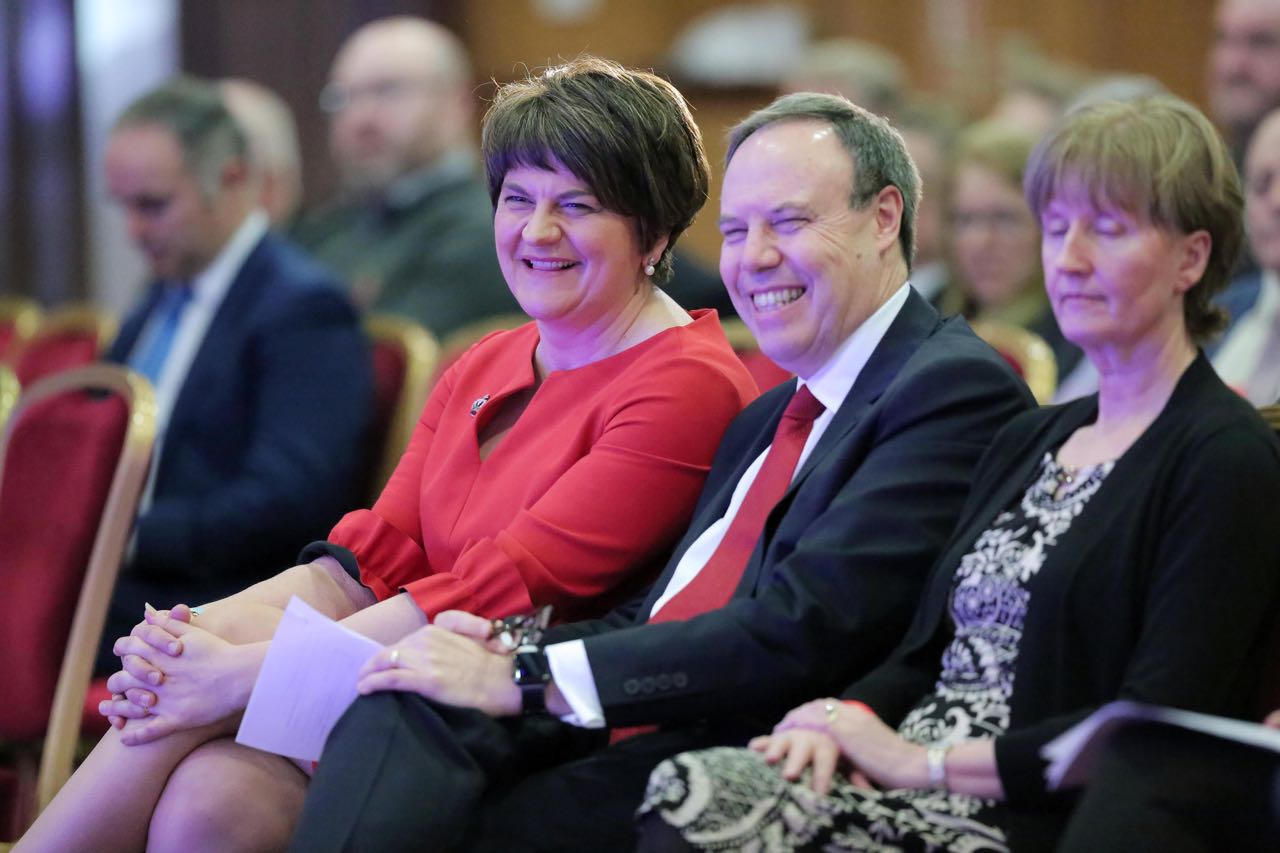 DUP deputy leader Nigel Dodds was across the detail and probably broke new ground in terms of individuals with whom he engaged during the talks.

The phones started hopping madly across Northern Ireland as the weekend wore on with heightened speculation about the ‘shape’ of the emerging package underscored by news that the two Prime Ministers were poised to arrive at Stormont.

Fear gripped the Unionist community according to a DUP insider. Ghosts of the 1985 Anglo Irish Agreement were reappearing with guarantees given by UUP leader Jim Molyneaux back then that he had been assured by PM Margaret Thatcher there would be no Dublin involvement in any deal.

Unionists’ worst fears were realised in 1985. Their government went over their heads.

An Irish Language Act was the bogey man this time in the emerging deal and MLAs were being left in no doubt about grassroots opinion on this matter.

The writing was on the wall.

The ship was going down. The PM’s visit with the Taoiseach adjudged to be a ‘distraction’ was used to mask the real story.

Arlene Foster returned to restating she could not recommend an Irish Language Act to her community last Tuesday and Wednesday.

That is not how the DUP’s version of the draft agreement text reads. The paper leads one to conclude the leadership had every intention of doing a selling job on a political structure facilitating a free standing Irish Language Act.

Such was the ferocity of the backlash visited upon MLAs and some MPs that Arlene Foster, Nigel Dodds and their team, opted not to disclose details of the draft agreement document to the Monday morning meeting of the MLAs.

There is no telling what the fallout would have been for the leadership of the party if the full facts had surfaced then – particularly any buy in into an Irish Language Act no matter how it was packaged.

The DUP leadership gamble backfired. Where does the leadership stand today? Damaged. Some MLAs and MPs are not very impressed.