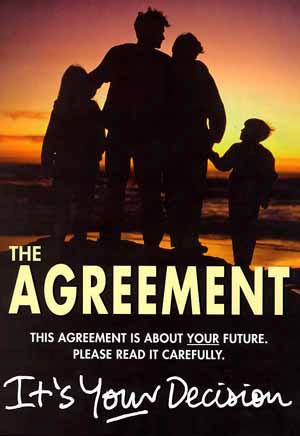 I tend to not get involved in political debate these days – mostly because I am embarrassed at the part I had in shaping the debate within what is euphemistically referred to as the Peace Process.

That part of my life I tend to guard like a ‘keeper of secrets’ and yet the recent break down in the talks between Sinn Fein and the DUP have forced me out of self-imposed retirement to shine a light in the dark places where the forgetful have taken up residence.

The Good Friday Agreement / Belfast Agreement – or any other name you wish to call it (in order to claim your little bit of ownership of it) is registered at the United Nations as an International Agreement. It is recognised by the EU as an international agreement and the United States government of the time under Bill Clinton were guarantors of the agreement. So I implore people to give me a few lines to explore some of the ramifications of re-negotiating terms of an already recognised international agreement.

Local political parties may sign up to an international agreement but it is governments who sign off and in doing so recognise the international stature of it.

A lot of criticism has been levelled at Sinn Fein and the DUP for excluding the other parties from the talks. The SDLP, The Alliance and the Ulster Unionists have been clamouring for months to be allowed to participate and when that failed they almost begged to be allowed to know what was even being discussed. Basically they were refused any meaningful engagement rights despite having a combined sizeable mandate.

Are Sinn Fein and the DUP to blame for this? Upon reflection the answer has got to be no. What on earth were the two governments thinking of when they continued to allow two local and diametrically opposed parties to hold non inclusive talks for thirteen months on an internationally binding agreement.

The two governments themselves abdicated their own roles with regards the international aspect of these non-inclusive talks. They barely turned up either. Like them or loathe them Tony Blair and Bertie Ahern rolled up their sleeves over and over again at various venues – two national leaders of two different countries sometimes aided by American diplomats and presidents, a Canadian general, an ex-Finnish prime minister, a host of EU officials – oh and a member of the ANC!!

However, Theresa May is not a natural negotiator and Leo Varadkar has negotiated importance imbued upon him because he has 26 other EU countries supporting him against the UK. Neither of the two leaders of countries who was co signatories to the international agreement knew anything about the content of the so called final accommodation.

Why else would they fly in to sign off on a deal, grab the limelight only to find out that Arlene would not proceed any further for reasons we or the two governments have yet to discover?

The two governments did not know what was going on – but they should have known; it was their job to know. And then we had the debacle of Mary Lou McDonald going to inform the Irish Government of what they were discussing and what the accommodation was. What a complete farce. The two international governments should have been in charge all along of any bolt on negotiations and outcome to an internationally registered agreement.

Internationalisation of the agreement does not sit well with some people here. For years, some within Unionism believed that the only people who really understood them was white South Africa and Israel. (They have since dropped South Africa but have found a new ally in President Trump).

The very name Sinn Fein (Ourselves Alone or We Ourselves) comes from a time when they thought they could make their own way in the world unaided. Both the DUP and Sinn Fein historically agreed on one thing though – they were both completely Anti EU parties and canvassed quite openly against the EU. Seamlessly and without much media attention Sinn Fein became strong advocates of the EU – the DUP still remain opposed to the EU but want any subsidies that might come our way because of our membership of it – and being a member of an international club brings with it international responsibilities.

At present we are still members of the EU, subject to the rulings of the European Court of Human Rights, we are British citizens and as such are expected to be good global citizens and our government abides by the resolutions of the United Nations.

What we might like to think is a local squabble about Irish language, LGBT rights, marriage equality, adoption rights, abortion Law and legacy are not entirely local – in fact they are anything but local. As British citizens it only takes one person to bring the right test case and the British government would have to legislate immediately and bring us into line with the rest of the UK.

Just recently a Labour MP threathened to bring a private members bill before the House of Commons. As I said it only takes the right test case to anyone of several authorities including the EU, the ECHR or even to the UN and our local squabble is once again internationalised given its status as an international agreement.

It is too easy to blame local politicians – even although I sympathise with those many people who angrily proclaim to stop their wages I urge caution. I know many of my fellow citizens will utter: “You have sat too long for any good you have been doing lately…. depart, I say; and let us have done with you. In the name of God go!” All politicians eventually learn the hard lesson that ‘all glory is fleeting’ – especially when matters are taken out of their hands.

The British Governments do not want Northern Ireland to be a millstone around their necks on the global stage again. They suffered enough from that in the past as we were seen as nothing more than an inflamed boil on the buttocks of the world.

In accordance with the international stature of the GFA, in the next few weeks the British and Irish governments will jointly have to decide how to run Northern Ireland. “Beware the ides of March” my fellow citizens. Beware of people who are no more than ‘birds of passage’, who will make decisions for us and will make them quickly.

The issues over which we have been squabbling mean absolutely nothing to the outsiders who will decide upon them. Theresa May has more to lose from adhering to this international agreement than anyone. She can’t afford to fall out with the DUP who prop up her government and she can’t afford to not consult Dublin with regards running Northern Ireland lest she is seen to not honour an international agreement with regards the bespoke joint governmental arrangements – in other words she fears the label that Britain writes bad cheques.

All this because two governments left two local parties to re-negotiate an international binding agreement that excluded all others – a complete anathema of the Good Friday Agreement that has inclusivity at its heart. And not just local inclusivity – national and international underwriting of the GFA have repercussions way beyond our local imaginations.

The Volga was overflowing and the two governments were organising swimming lessons!! Alas we live in a global world.

Social share:
Previous ArticleAcht na Gaeilge: What are the rights of people who don’t speak Irish? – By Daniel Holder
Next Article Britain and Ireland’s European Question – By Bernard Conlon