You are at:Home»News & Current Affairs»Hurling bricks in the political glass house – By Brian Rowan
Social share:

Who would believe in any new power-sharing government here – believe that under its surface it would be any different in terms of the real meaning of partnership?

On this website, a couple of days ago, I described the political glasshouse of this place and the throwing of bricks, never mind stones.

Just look at Twitter – read it with a sick bucket by your side.

This website has made clear its view on the Barry McElduff Kingsmills video – intentional or unintentional, how offensive it was, the understandable anger, the crassness of the video and the view that a three-month suspension from party activity, meant he got off lightly.

Not just Unionists were angry. That extended into the nationalist and republican community.

When people heard Declan Kearney’s interviews on Monday morning there was a widely-held belief that the political career of the West Tyrone MP was over.

Equally crass, has been the  retweeting by unionists of a Kingsmills cartoon – the running blood lines of the dead used as a blunt  instrument to dismiss the Sinn Fein so called ‘red lines’ or demands for equality and respect.

This is what I mean by the throwing of bricks in the political glasshouse – throwing them and smashing and hurting everything and all around.

DUP MLA Christopher Stalford deleted his tweet after being contacted “by a representative of a family member of one of those affected by the Kingsmill massacre”. 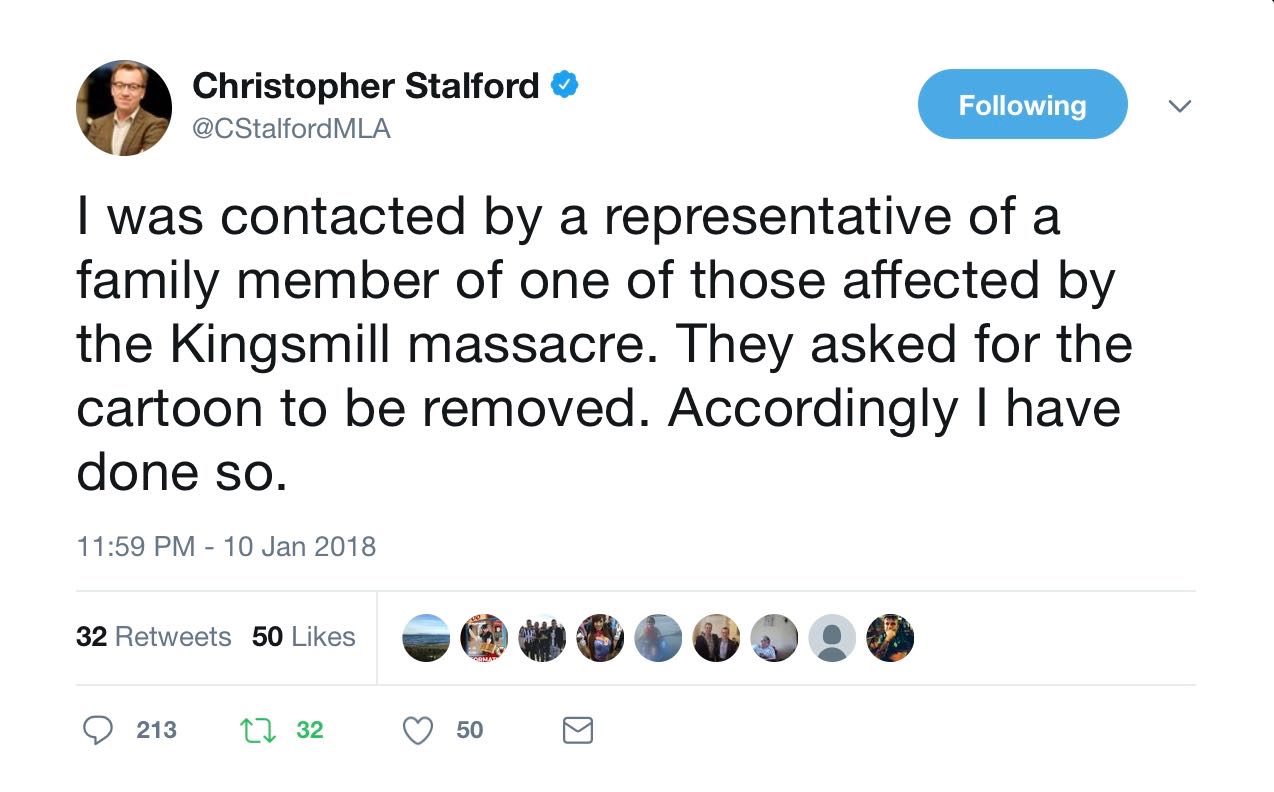 He had been urged by others to remove the tweet long before then.

Take all of this out into wider frames.

The notion that a legacy process can be designed by politicians here is frankly nonsense.

They should not be allowed within a million miles of that.

It should not be a local design, but shaped and delivered from outside of us – and from outside the frame of political point scoring.

Back to my opening question.

Who would believe that any new power-sharing government here would be meaningful and genuine?

Another round of talks is being planned.

The same people in the same rooms discussing the same issues that have been talked about and talked around during the past year.

Give us all a break.

The two governments need to work out the next steps.

That farce on the hill has been indulged for far too long.

Social share:
Previous ArticleDirty Fighting Demeans Us All – By Patricia MacBride
Next Article Reform of petition of concern ‘key to unlocking Stormont’ – By Patrick Corrigan