You are at:Home»News & Current Affairs»STORMONT: BACK TO THE BEGINNING OF THE END – By Brian Rowan
Social share: 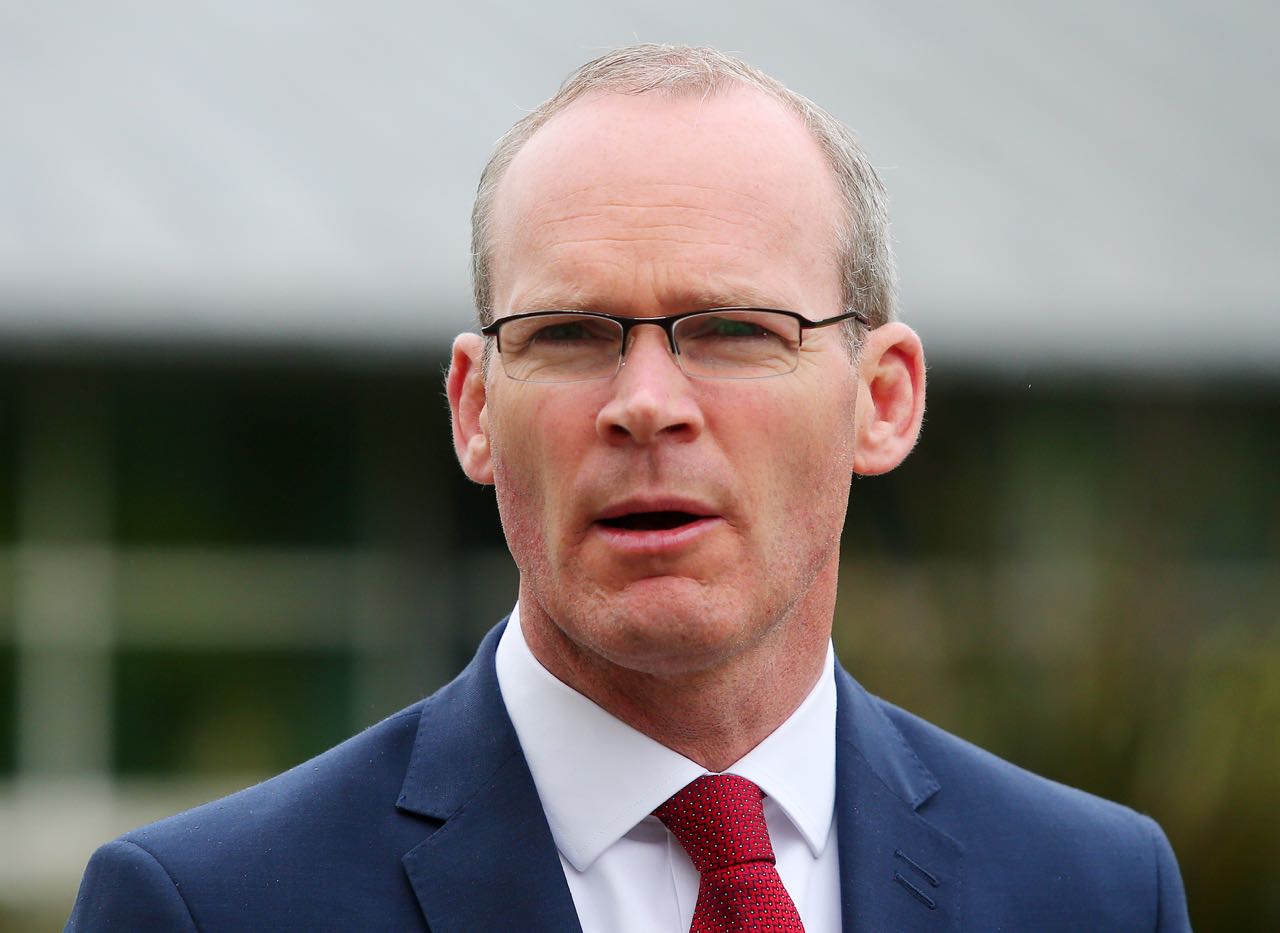 Twelve months on from that pantomime moment at Stormont that was to hasten the collapse of the political institutions, there is now a recommendation to cut MLA salaries.

A proposal to reduce pay – but still no magic wand to fix what is so badly broken.

British Secretary of State James Brokenshire is testing the mood for another round of talks – but still the penny has not dropped.

The idea that Sinn Fein has taken the ball off the field in some huff, ignores the nationalist vote that welcomed the decision to bring those institutions down, and then the vote in which that community turned its back on Westminster; and, here we are, a year on, no closer to matters being resolved.

My diary note for December 19th 2016 recorded a day of farce and shambles at Stormont.

Arlene Foster made a statement on RHI without the “authority or approval” of then deputy first minister Martin McGuinness; and, during that day of political pantomime at Parliament Buildings,  the then Ulster Unionist leader Mike Nesbitt described the position of Speaker Robin Newton as very close to untenable.

In the fallout over the botched RHI scheme, Sinn Fein had threatened “grave consequences”, but paused in December last year  – although not for long.

Too much damage had been done.

Within a couple of weeks of those events on December 19th 2016, a republican described “a momentum in the language that could take us over the edge”.

By then, we were just days away from the resignation of Martin McGuinness and the beginning of the end for this Executive.

Two elections – one to the Assembly and the other to Westminster; the Brexit Battle, the Tory-DUP arrangement and a tug-of-war over rights have left the politics of this place in turmoil.

Tanaiste Simon Coveney is now talking about the possibility of decision-making within the frame of intergovernmental conferences.

To unionists this sounds like joint authority. Ulster Unionist leader Robin Swann urged the Irish Foreign Minister “to step away from the microphone”, and former DUP SPAD Richard Bullick tweeted this thought. 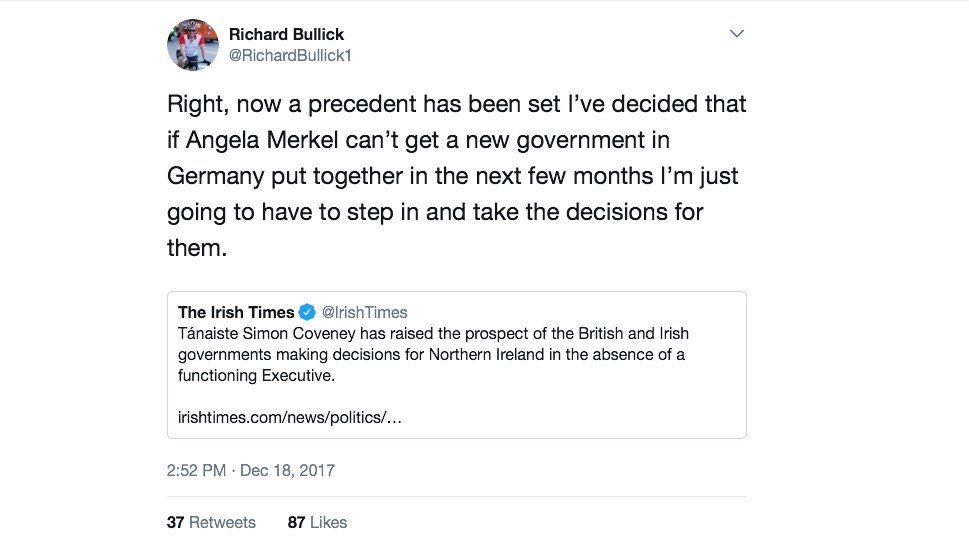 Coveney, of course, speaks in a context and not in headlines; a context, that not for the first time, has been ignored.

What is his preferred option? That the Executive is restored at Stormont, but, a year on from all of the play and the farce and the shambles of December 2016, does anyone really believe that if things cannot be fixed on the political hill that this Dublin Government will sit quietly in the corner?

It won’t and nor should it.

In contacts with the parties, Brokenshire has been assessing the possibility and worth of another set of talks in the New Year.

If they are the same talks as the last talks, then they will be a waste of time.

The DUP wants the Executive restored and talks on outstanding issues to continue in parallel. 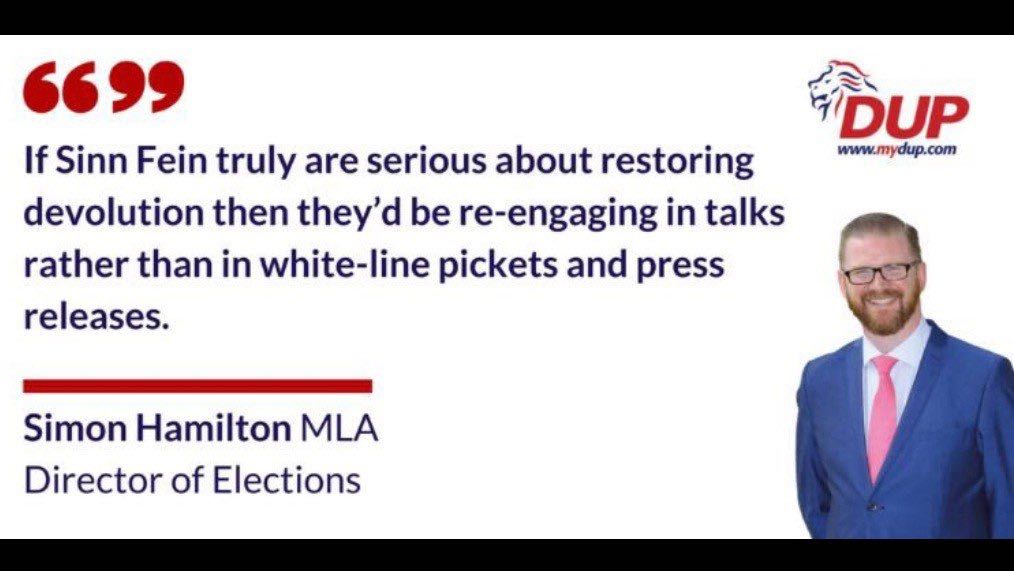 This is the penny that still hasn’t dropped.

There won’t be another Executive, First Minister and functioning Assembly unless there is certainty about agreement and implementation on those outstanding matters, including an Irish Language Act, marriage equality and a legacy process.

Perhaps, rather than another set of talks, or a pay cut, Brokenshire should be thinking of shutting down Stormont.

Would the Tory/DUP arrangement allow for such a move?

Coveney introduced the possibility of another election. Brokenshire has that option available to him, but it would be an election back to where we are now – back to that beginning of the end.

The politics of this place have changed completely. Same-old solutions won’t work.