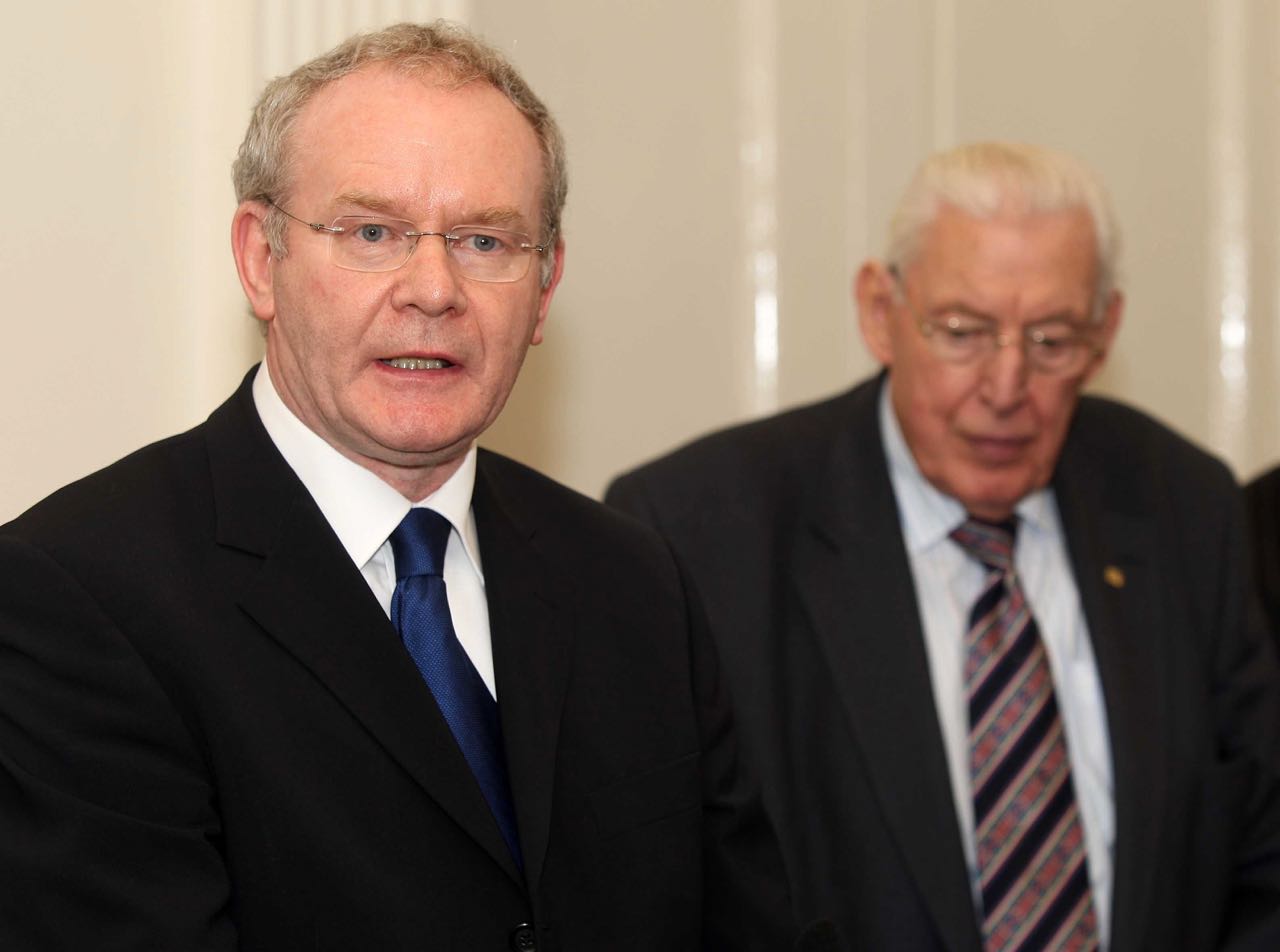 A siege mentality. The cliché that for many encompasses the unionist political psyche. Historically all sieges result in relief or defeat for the besieged or occasionally a negotiated settlement.

Despite the DUP’s current Tory deal, no-one is likely to come forth to relieve unionism’s siege and defeat is not palatable. So persuasion and negotiation appear to be the only credible option.

To succeed in the long term unionism needs to change not only its tactics but also its mindset.

A ‘new unionism’ is required if the Union is to be sustained well beyond the Northern Ireland centenary in 2021.

It’s a common view that Northern Ireland’s continued place in the Union is running out of time, the siege is about to end, and to end not because the vast majority of the besieged have given up, but because their proportion of the population has fallen below the critical level.

Democracy of 50% plus one will deliver constitutional change. So believe the most ardent Irish Republicans who have been content to end physical force in the expectation that demographics will deliver the outcome they desire. Unionism has a strong case that if put well can persuade a comfortable majority to support the current constitutional situation in the longer term. Furthermore, the future demographics may not be as clear cut as some believe.

The 2011 Census showed that while there was still an overall Protestant majority there were more Catholics than Protestants from the age of 36 (now 43) and below and this demographic evidence has been used to predict the end of the Union within the next decade or two.

The 2017 Assembly election results reinforced this narrative of an endless march towards Irish unity as political unionism became a minority in Northern Ireland for the first time.

The Catholic birth rate while falling, is still significantly higher than the Protestant population. For example, of the 13,587 families in 2011 with 4 or more dependent children, 8,216 were Catholic.

However, that expectation, so long anticipated by Sinn Fein, may not deliver the hoped for outcome. One of the main demographic changes in recent years in Northern Ireland has been the significant increase in those stating that they have no religion. In the 2011 Census less than 1% of 75 year olds identified as having no religion yet this increased to over 15% for those born in the year running up to the census. What is seldom stated is that those with no religion predominantly define themselves as British (63%) as do those from other religions (53%). Only 10% and 12% respectively self-identified as Irish and the rest Northern Irish. Of course, while religion is an important element in identifying political allegiance in Northern Ireland, it does not tell the full story. In 2011 109,000 Catholics identified as British along with a further 250,000 who defined themselves as Northern Irish. Thus poll after poll that shows that the desire for constitutional change is limited to less than a third of the population.

None of this should encourage unionist complacency. Brexit has the potential to be a game changer if handled badly and while the threat of Scottish independence and its impact on the wider Union has diminished, the issue is still alive but unionism is still very much in the game and much depends upon its approach and message in the years ahead.

For long term stability and success in Northern Ireland unionists must persuade all stakeholders that any change in our constitutional status will happen incrementally, if at all. The medium term forecast based upon voting figures and demography suggest a constitutional stalemate with inertia favouring the status quo for those with no hard preference.

Unionism’s challenge is to make the existing constitutional status either the preference or fall-back position for a continuing majority in Northern Ireland, and more importantly for the undecided centre.

If there is no constitutional change on the horizon, reinforced by the economic, political and social benefits of the Union, then the NI body politic needs to accept that a functioning Stormont is key to future success.

The absence of a functioning Assembly and Executive will increase political instability and, along with the potential impact of Brexit, lead to lower economic growth and worse public services. In saying that, the simple return of Stormont is no panacea.

Having witnessed our devolved government up close, even for only a short period, it was enough to realise that the structures designed to resolve conflict and sustain peace are not fit for delivering joined up, effective government. The brief 2016 Assembly may be remembered for the RHI debacle but it was also the Executive without a budget or an agreed Programme for Government. Reform was slow and decision making tortured.

The current hiatus in devolution provides an opportunity to negotiate reformed structures for Stormont to deliver better government for all the people of Northern Ireland.

Returning to the Belfast Agreement process for designation of First Ministers, developing a form of power sharing to include voluntary coalition and making local councils truly ‘super’ by devolving more power and responsibility should all be introduced.

Radical decisions are needed if the required action on health, the economy and infrastructure is to be taken.

Each section of our community faces its own political challenges. Irish republicans should understand what the political parties in Dublin have long accepted in that Irish unity is on the ‘long finger’ at best and that unionists must be persuaded if they are ever to achieve constitutional change. That is not to diminish Sinn Fein or the SDLP’s right to campaign for a united Ireland but to acknowledge that working together to achieve long term political stability will deliver better outcomes for the people they represent.

Unionists in turn must accept that the days of being in a majority are gone and that Irish nationalism must be treated as partners in the governing of Northern Ireland including showing respect for Irish culture.

Furthermore, a liberalisation of social mores and attitudes, especially amongst the young, requires Northern Ireland to better reflect wider UK attitudes on social issues. The famous line from di Lampedusa’s novel The Leopard should resonate with unionists ‘If we want things to stay as they are, things will have to change’.

For nationalists and republicans Northern Ireland will never be as British as Finchley and for unionists it will never be as Irish as Finglas. We have a unique stalemate which may become a political war of attrition, benefiting no-one. Or we can choose to park our constitutional issues and build a better society for us all. The status quo is the only show in town for the foreseeable future.

Both traditions must accept that a successful Northern Ireland requires a local government that will work to benefit all the people and, most importantly, a government that everyone wants to succeed. Northern Ireland has enough socio-economic challenges without choosing to add continual political upheaval to exacerbate our many existing difficulties.

Unionists must realise that a combination of Brexit and Conservative Direct Rule will not enhance the Union in the long term nor will republicans and nationalists achieve success by hoping for a Border Poll and fighting a decades long battle to achieve their ’50 % plus one’.

No matter their constitutional preference or chosen nationality, everyone in Northern Ireland has a vested interest in making this place a success. Even the most ardent Irish republican must see that a prosperous and stable Northern Ireland will have a greater chance of being successfully assimilated into a new Republic.

Similarly unionists should understand that in an era of Brexit and greater regional devolution it is wise for Northern Ireland to minimise its burden on the wider UK taxpayer. Furthermore only by creating greater economic success, developing a more modern society and ensuring political stability will the Union be secured.

Firstly, unionism must become future focused. A fixation with history is not unique to unionism but some unionists appear to be more comfortable commemorating past successes than building for the future. While it is important to learn from our past and commemorate key historical events as part of our cultural legacy there is a danger of unionism becoming an anachronism.

Unionism’s focus should be on articulating a vision for a successful Northern Ireland within the UK and engaging the widest possible audience in support of that goal. Widening unionism does not diminish it, in fact, it is the only way to guarantee its future success.

Greater engagement with younger voters is also essential to counter the growing narrative that unionism is the politics of the old. A recent Lucidtalk poll had 56% of those aged between 18 and 44 supporting a united Ireland. To change that trend unionism must show how it can better help those aspiring for a better tomorrow.

Secondly, unionism must be more open and welcoming. One of the main selling points of the Union is that it secures our place in a modern, dynamic country whose economy and power has a global reach, and has the diversity that makes London the capital of the world.
Yet unionism too often comes across as narrow, exclusive and intolerant, making it easy for its opponents to criticise and paint it as bigoted and sectarian. Being part of a diverse, modern Britain should be an easy sell to many who are agnostic on the Union. This is a key audience which makes up as much as 10% of the electorate and who will play a critical role in deciding the future direction of Northern Ireland.

Our goal should be to engage and win over this demographic and not repel it through a one dimensional definition of unionism.

Thirdly, unionism must embrace partnership government. While unionist parties have led the devolved Northern Ireland Executive since its formation in 1999 it is perceived to be sharing power through gritted teeth. Unionism needs to be generous both politically and culturally, as only by sharing power can unionism retain it in the longer term. Greater efforts at Stormont and in council chambers across Northern Ireland to engage with nationalist and other parties will show that Northern Ireland can be a ‘warm house’ for all.

Engagement with Irish cultural groups and organisations and a willingness to respect Irishness and Irish identity within Northern Ireland is a necessary step in moving forward from the past.

These changes will lead to a more vibrant and confident unionism that is not fearful for the future and that can attract support from non-traditional areas. By modernising and undertaking more outreach unionism will strengthen and improve its long term viability. For many it may be counter-intuitive but by breaking out of its siege mentality unionism is more likely to prosper and grow.

While unionism needs to change it cannot make Northern Ireland a success on its own. Sinn Fein, the SDLP and the other parties must also play their part. Generosity is required on all sides and a desire to make Northern Ireland work. To misquote former Prime Minister Terence O’Neill, Northern Ireland is once again approaching a crossroads and we have a choice over which road we will take.

Essentially we have two options; we either learn to share Northern Ireland and agree to work together to make this place the best it can be or we can indulge in a long term war of political attrition with the danger that we slip back into violence. Surely the choice is obvious. If we have learnt nothing else from our brutal and futile Troubles then at least let us all understand that killing your opponents with kindness must be a better policy than just killing them. There is a positive future for everyone in Northern Ireland, we just have to take the right road.

Social share:
Previous ArticleDealing With Unavoidable Reality – by Colm Dore
Next Article STORMONT: BACK TO THE BEGINNING OF THE END – By Brian Rowan