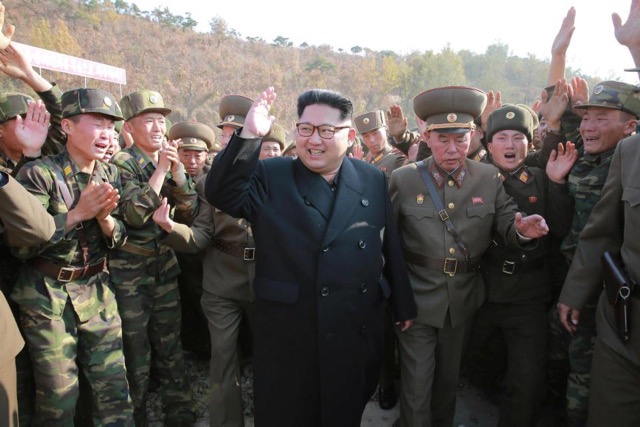 I’ve been lucky enough to live or visit places such as Alexandria, Kathmandu, Phnom Penh, and Beirut, all fantastically beautiful and friendly cities in their own unique way.

Even during the Arab Spring the locals in Alexandria maintained their welcoming smiles.

Perhaps the most intriguing experience was a whistle stop 72 hours in Pyongyang. I first got to ‘know’ the Hermit Kingdom during a year spent in Cheongju, South Korea.

After reading Kang Choi-Hwan’s book, ‘The Aquariums of Pyongyang’ and visiting the border at Panmunjom my interest in the unknown beyond the 38th parallel increased. A visit was a must.

Nine years later, in May of 2015, that opportunity arose.

Before I continue I must point out the obvious, the North Korean regime is a horrendous dictatorship and one that has starved, tortured, brainwashed and brutalised its own people. Of that there is no doubt. This is clearly illustrated in Kang’s incredible and heart wrenching book and various other books and documentaries that I have read and watched over the years.

I suppose you could call my interest a morbid fascination, like visiting the Nazi or Stasi museums in Berlin, the Killing Fields of Cambodia or indeed the Troubles tourism of my hometown, Belfast.

To my surprise getting into the DPRK was pretty straight forward, much easier than getting a visa for areas of the Middle East or China. There were two of us making the trip, myself and an Australian friend I had known for several years. We contacted an Australian run Beijing based tour operator, Young Pioneers who specialised in North Korean tourism.

Our contact, Rowan was of great assistance. We were based in Shanghai so we emailed all required documents and money transfers to Rowan and she did the rest.

Rowan met us at Beijing airport, gave us our documents and a prep talk which went along the lines of ‘Don’t make any negative comments about North Korea, the Kim dynasty and do not mention religion.’

After some questions and nervous giggling off we went.

We spent the short Air Koryo two hour flight chatting to a German diplomat who had just spent the weekend in Beijing stocking up on food and some things from Ikea. I got the impression that’s what the majority of people on the flight had been doing.

As we began our descent and before reaching the showcase capital it was easy to see the poverty from the aeroplane. Beautiful mountainous countryside dotted with small single storey dwellings, some thatched.

We could clearly see the locals working in the fields. There were carts but no vehicles, no tractors no farming machinery, cars or trucks.

I assume those working in the fields were a part of some sort of cooperative as owning lands or a business is illegal.

As the plane landed my ozzy friend quipped ‘Toto, I don’t think we’re in Kansas anymore.’

She was right. This was a very different place! Hundreds, possibly more than a thousand dishevelled North Korean troops were lined on the grass verges between the two runways and along the sides of the terminal staring at us as we taxied towards the gate. Our German friend explained that the soldiers had been put to work digging and growing vegetables on the grounds of the airport, a glimpse into the health of the DPRK economy.

At this point excitement was gradually being replaced with nerves and a tiny bit of doubt on my decision. However, this was eased somewhat on arriving at passport and immigration. The immigration officer greeted us with a huge smile and the childish awkward way in which the officials examined my iPhone made me feel slightly sorry for them.

It was obvious they had no idea how to operate this alien device from a future to which their country had not yet arrived. Smart phones are allowed into the country but only for the camera function. There is no network to which to connect anyway.

We came through to arrivals and met our two guides/minders and driver, whose names  escape me. Kwon (male) and Jin (female) spoke perfect English and I assume were from the North Korean elite – two of the ‘lucky’ ones.

It’s obligatory for tourists in North Korea to pay their respects, lay flowers (€5 per bunch) and bow in front of the huge statues of Kim Il-sung and Kim Jong-il.

We were brought to perform this farce even before checking into our hotel. I knew we would be expected to do this so I wasn’t in the least surprised but when the moment came I felt very uncomfortable and somewhat guilty. As I bowed I quietly prayed for the victims of the country’s regime.

Pyongyang is very green and clean. The absence of industry and vehicles keeps the air clean in contrast to the smog we had left in Beijing. Apart from the lack of cars the first thing that struck me was the absence of advertising. It made me acutely aware, for the first time, of how much we are smothered in advertising in the west. No shop fronts, no billboards, no fast food restaurants, no promotional material of any kind anywhere to free enterprise.

Instead most streets had banners and murals to the three great leaders of the country. Speakers attached to lampposts billowed out announcements (from which our guides/minders refused to translate) and patriotic music for the masses.

There were legions of troops everywhere though not armed. Another striking aspect was the fashion of the locals. In a way it felt as if we had been transported to some kind of 1940s Orwellian parallel universe. The clothes and hairstyles seemed from that era. All the woman and girls wore knee length skirts and flat shoes, the men and boys in suits.

Our trip was very tightly controlled and we were shown only what we were allowed to see. Again, I knew this to be the case before planning the trip.

Nevertheless there were a number of instances when we had the opportunity to interact with local people. Just like at immigration the people we encountered were always smiling and very welcoming. In the stunning beautiful subway station we travelled on a crowded train. People said hello smiling and I was even passed a baby to hold. I am sure his mother would have taken a picture were she allowed to own a smart phone like the rest of us.

Our second day in Pyongyang was Labour Day. We visited a beautiful city park; families were drinking and eating, dancing and singing. That evening we sat in Kim Il-sung Square, usually the sight of military parades and demonstrations but on Labour Day it was filled with ten thousand locals, women in beautiful traditional Korean dress and their partners, dancing in sync.

We were even invited down to join in the dancing. Jin, our guide, complimented me on my moves!

I grew fond of our minders over that short period. I got the impression that Kwon really believed in the regime and the propaganda it espoused however with Jin I wasn’t so sure. She seemed to have a mischievous, fun and cynical side to her. I remember her asking over lunch ‘So what’s going on in the world?’ Kwon didn’t seem happy; he interrupted to say proudly that they got all the news from around the world but around a week later because the government has to check it firstly.

He didn’t seem to see any problem with this.

But it was atop of the Juche Tower admiring the view and out of earshot of Kwon that Jin began to open up a little more. She had many questions about the world. What was Europe,  the United States and most tellingly, South Korea like? I could have told her the truth of how so much better it was than North Korea but I didn’t. I explained a little of what it was like but I felt terribly sorry for her in that moment. I am sure Jin and millions of others in the DPRK want the same opportunities as the rest of us but they are denied them. She may be from a privileged family but she is still trapped.

On our last night we went for dinner with our guides and driver. We ate delicious Korean food and drank too much soju. Kwon began to let his guard down a little too and talked of his new baby daughter who had just reached 100 days old, a special milestone in both Koreas.

It was in these personal encounters that really made my trip to Pyongyang so special and one that I will never forget. Leaving Kwon and Jin at the airport I felt genuinely sad for them both but especially Jin. I hope, in time, she gets to travel, see the world and do all of the many things we take for granted.