You are at:Home»News & Current Affairs»For me an Irish Language Act isn’t just about dry text and translation – By Máirtín Ó Muilleoir
Social share: 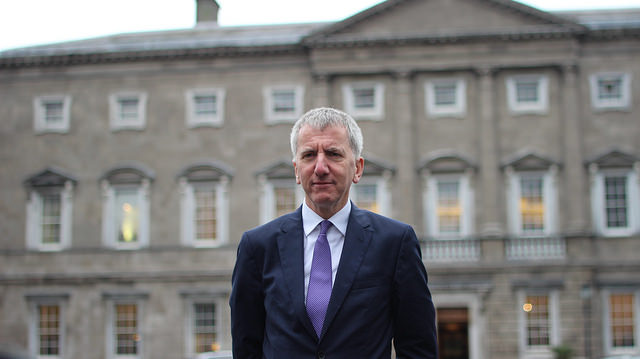 It’s about celebrating a living, vibrant language as a priceless treasure of all who live here.

It’s about our past — Irish has been spoken here for over 2,000 years — but it’s also about our shared future where difference is valued not scorned.

But, for me, most of all, it’s about Nathan and Breandán.

I first met the boys and their proud-as-a-peacock mum Emma when carrying out post-mayoral duties in Belfast. They were preparing to start secondary school, having completed their primary education in Irish-medium Scoil na Fuiseoige in Twinbrook. Recently, they completed their third year at Coláiste Feirste, where numbers are soaring towards 700. Not bad for a school set up without government support and just nine children on its first year roll back in 1991!

When I bumped up to the Stormont Assembly in late 2015, I put a picture of the boys on my office wall to remind me that when it comes to an Irish Language Act, we are talking about the dignity of real people.

Yet the language the twins love and speak still enjoys no official recognition here.

Worse, they are branded crocodiles for standing up for their rights and told that there will “never be an Irish Language Act”.

Tellingly, the last DUP Education Minister removed every sign and trace of the Irish language from his departmental website, stationery and promotional materials within 24 hours of taking up office.

In fact, Manx — a close cousin of Irish — is an official language in the Isle of Mann though it’s spoken by less than 1,500 people.

Like a Bill of Rights, marriage equality and the rights of families to coroners’ inquests, Acht Gaeilge is a matter of basic rights – basic rights that are protected in England, Scotland, Wales and the rest of Ireland.

Critics in the unionist camp contend that an Irish Language Act will cost two fortunes and will involve cat o’ nine tails-style punishments for those who fall foul of the new legislation.

That’s nonsense. The Irish Language Act for which Sinn Féin is campaigning is prudent, practical and pragmatic. Costs have been estimated by officials at around £4m per annum — from a resource budget of over £10bn. As a former Finance Minister, I have no doubt the Irish Language Act will represent excellent value, especially when, as in Wales and Scotland, we start to view Irish as not just a cultural but also an economic and tourism asset.

Siren voices also insist that Sinn Féin will make speaking Irish a condition of employment for ten per cent of all public employees. Bunkum! Fair employment legislation here was hard won. Sinn Féin sees no need to set aside that legislation under any new Irish Language Act.

Indeed, most government departments will find they can transfer Irish speakers to take up the new responsibilities, which will flow from a more modern and progressive approach to the use of Irish.

Interestingly, those in the DUP whose voices are raised loudest to protest the investment in an Irish Language Act were mute about the £80,000-a-day squandered in the RHI debacle.

Their experience, sadly, has been in blocking the Irish language — even stooping to snatching Irish college grants from schoolchildren in the mouth of Christmas. That’s why those who love Irish won’t be taking any lessons in language promotion from the DUP.

Instead, they’ll be echoing the views of the Committee of Experts at the Council of Europe, of the United Nations, of the Irish Government, and of pobal na Gaeilge – all of whom say a stand-alone Irish Language Act is the only way to ensure effective promotion and respect for the Irish Language.

The Irish language belongs to all. It is above politics. The argument for an Irish Language, like the argument for LGBT rights, has been won. It’s time the DUP caught up with the rest of us.