You are at:Home»News & Current Affairs»Why I am not buying into all this talk of a quiet summer – By Clare Bailey MLA
Social share: 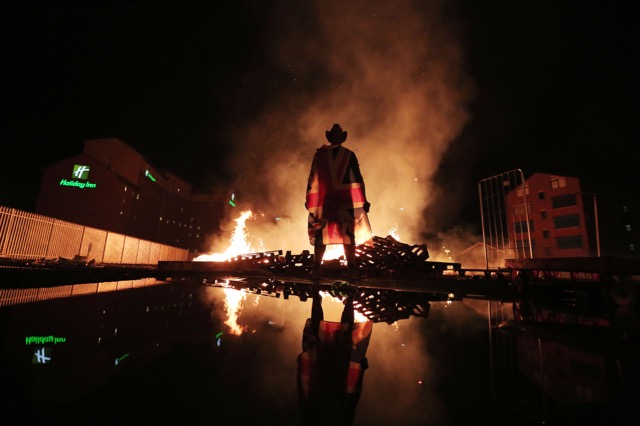 It wasn’t particularly positive or quiet for many people within my South Belfast constituency.

I spent time with the residents of Victoria Place in the aftermath of the 11th night bonfire. Their scorched building and tired faces told the tale of their “quiet summer”.

They faced walls of pallets in the weeks leading up to the twelfth and brick walls from the NIO and other statutory agencies thereafter.

Likewise, I was in the Markets area last week as children as young as twelve caused havoc within their own communities, using an internment bonfire as an excuse for their anti-social behavior.

I’m happy to work with people on the ground and there’s been lots of different constituency issues upon which I’ve worked over the summer.

There’s been no point in my going to Stormont because there has been no meaningful negotiation between the DUP and Sinn Fein or any parties over the last number of months. There has been no Foster/O’Neill détente so far as I can see.

The reality is that the Northern Ireland summer will have absolutely no bearing on political events in Stormont.

I am, however, very interested to see how things unfold in Westminster once the summer recess comes to an end.

The “weak and wobbly” May government will come under renewed Labour attack across this new Parliament.

How will the DUP junior partners withstand the renewed red artillery and media focus?

Utterance from senior figures like Edwin Poots and Jim Wells in the background don’t help the DUP cause.

So what happens next at Stormont?

Will there be an autumn deal and will James Brokenshire ask the DUP to contest another Assembly election while propping up the Tory government? Or, do we continue the talks and give the public more cause for consternation at dysfunctional politics?

The reality is that devolved government cannot flourish in the future while legacy issues go unresolved.

Legacy issues hold the potential to derail our political process at any given point while we continue to procrastinate over the legacy of our past.

There has been much focus on equal marriage and an Irish Language Act in recent times and the Green Party supports both campaigns.

However, our politics will remain insecure and unsustainable and we will not be able to deliver on these “normal issues” while we expect our politicians to deal with legacy alongside a ridiculous Secretary of State who refuses to acknowledge the role of the British government in our conflict.

Meanwhile, those most closely affected by the conflict such as the families of the victims of the Omagh bomb, the Birmingham pub bombings and the Ballymurphy families show bravery and fortitude through their campaigns for truth and justice.

Politicians often talk up strength – particularly female politicians caught up in the double bind.  There is no strength in procrastination and allowing family members to die without answers about the true nature of the death of their loved ones.

True strength would be an acknowledgment of wrong on all sides and the acceptance that after seven failed attempts to deal with legacy, it’s time for an independent body to come in offer assistance.