You are at:Home»News & Current Affairs»FOOD FOR THOUGHT IN FESTIVAL CONVERSATION – By Brian Rowan
Social share: 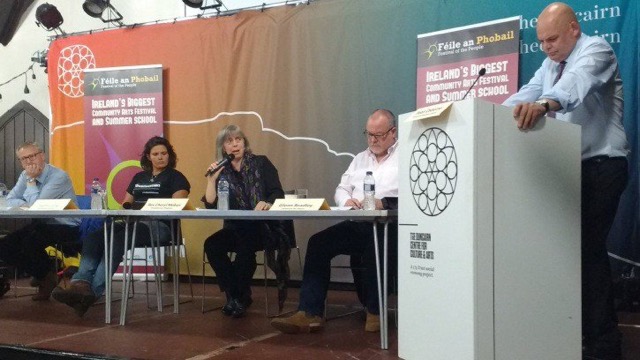 The venue was the Duncairn Centre for Culture and Arts situated in north Belfast – a part of this still divided city that was touched and hurt by the very worst of the conflict period.

On Wednesday, a panel and audience gathered for a discussion on grace, generosity and acknowledgement – and what those things should look like from a broadly Protestant or unionist or loyalist perspective.

We may be two decades and more into this peace process but, for the panel, this was not an easy conversation; to comment, to criticise (however constructively), to analyse and to suggest much room for improvement when speaking about your own community.

So, at times, you felt that nervousness in the conversation, the thinking before the saying, that worry about what others might think and how they might react to what was being said.

As the conversation opened out, Alan McBride quipped that people talk about the republican agenda as if it’s some disease that you could get.

McBride – whose wife and father-in-law were murdered in the IRA Shankill Road bomb in 1993 – was part of the panel alongside the academic Sophie Long, Cheryl Meban Presbyterian Chaplain to Ulster University and former soldier now businessman Glenn Bradley.

The event was chaired by Peter Osborne of the Community Relations Council, whose closing thought that peace-making could be “a 50-year process” was a reminder of the long road still to travel.

His first question to the panel asked, does unionism see reaching out as a weakness rather than a strength?

It opened out into a much wider conversation – the definition of victim, how all sides remember their dead, the role of churches, the challenges for unionism, how it could either evolve or perish.

“Is anyone talking about re-imagining the Union?” Sophie Long asked.

Sectarianism and militarism were other threads in this conversation.

In part of his contribution, Glenn Bradley said there was no glory or glamour in armed actions. 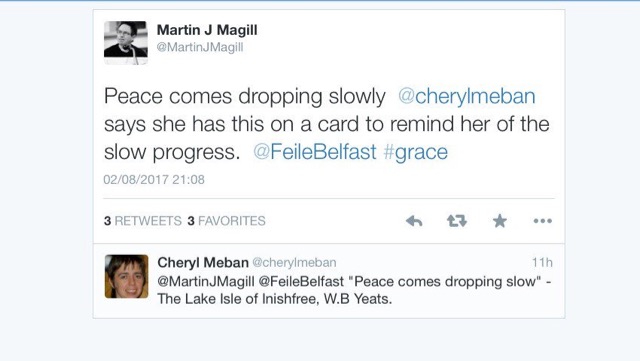 Cheryl Meban, quoting Yeats, reminded us that “peace comes dropping slow” and, then in her own words, accepted that it will take a long time to address the many fears.

“We’ve got to keep going,” she said – all of this, I suppose, part of that 50-year process of peace-building of which Osborne spoke.

We know now that there are no shortcuts from conflict to peace. 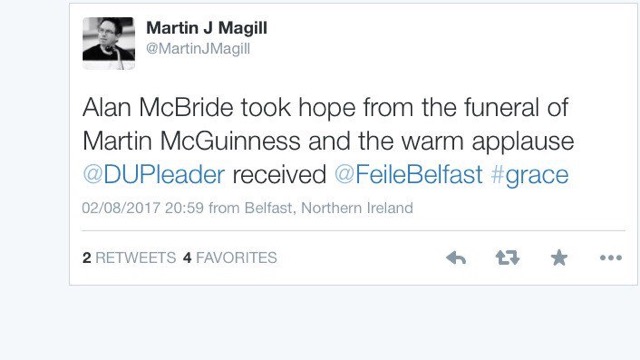 When there was a question about hope, Alan McBride spoke of two funerals; those present in the church in east Belfast – including Gerry Adams – for the service for the loyalist politician David Ervine and the applause for Arlene Foster when she attended the mass for Martin McGuinness in Derry. 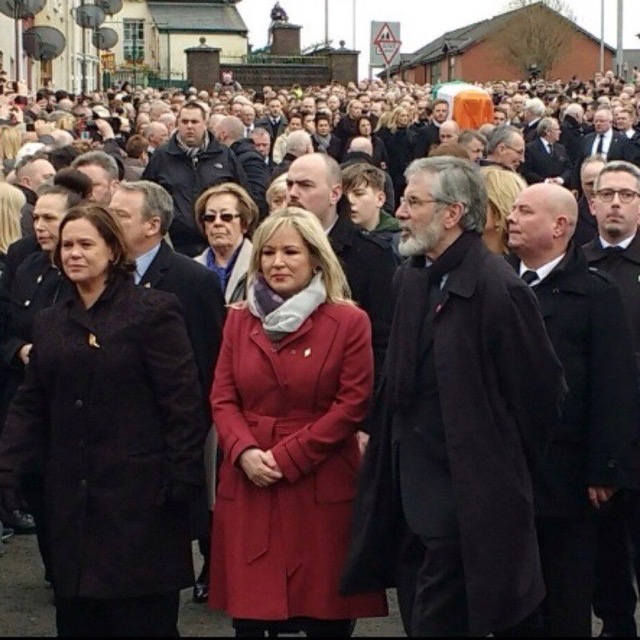 McBride had identified two moments when grace, generosity and acknowledgement were out in the open. There for all to see.

Wednesday’s event in north Belfast was part of a partnership involving the Greater New Lodge Community Festival supported by Féile an Phobail and the Executive Office; a conversation at a time of broken politics.

Just hours earlier, the DUP leader Arlene Foster had said she had “regretfully come to the conclusion that Sinn Fein aren’t interested in devolution” – this immediately rebutted by Gerry Adams.

We have a broken past and a broken present and we have conversations, such as this latest Festival event, that give us food for thought.

Some in politics could learn something from being present at these discussions and  events.

It is in these rooms that an example is being set.

Social share:
Previous Article“I remember the screaming” – By Doug Beattie
Next Article Together we can make it happen – by Mark Thompson