You are at:Home»News & Current Affairs»Decision time for devolution – No basis for white smoke – By Brian Rowan
Social share: 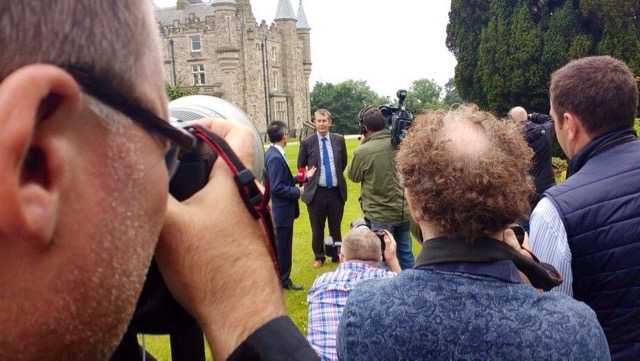 Is it all over bar the shouting? If not yet, then it is getting ever closer to that point.

On the twitter accounts of several DUP politicians we read a mood that suggests there is little time left for the Stormont Talks.

Is the DUP talking to itself or are the messages intended for a wider audience?

On Saturday, Sammy Wilson tweeted: It is now time for Direct Rule.

He was linking to his comments in the News Letter.

Also on Saturday morning, Ian Paisley, tweeted: Fact devolution as we know it is dead! 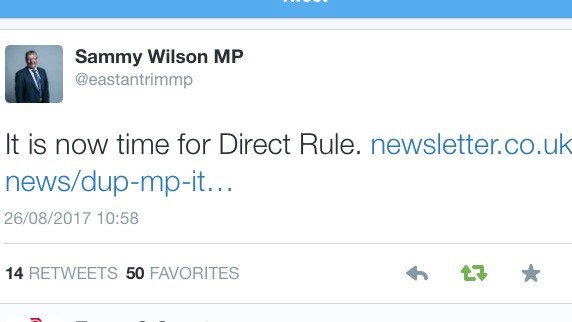 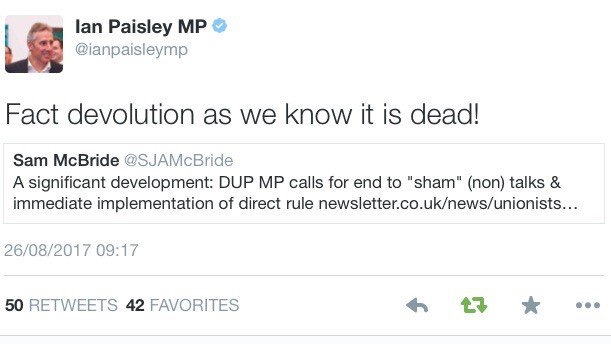 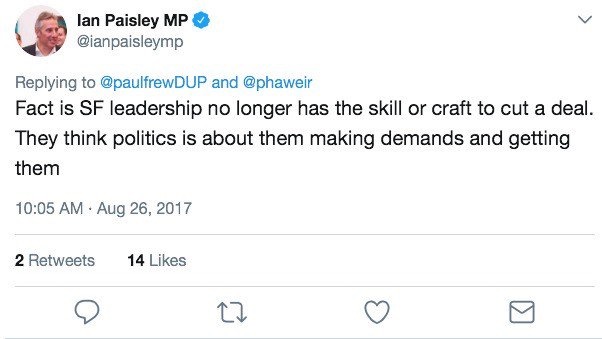 Quoted in the News Letter, Wilson referred to a “sham” talks process, while Paisley tweeted that the Sinn Fein leadership “no longer has the skill or craft to cut a deal”.

The two MPs are expressing a wider party mood. This is not solo-run politics and, so, it seems, we are arriving at a moment of decision on the future of devolution.

“There has been nothing conciliatory from the Shinners over the summer,” a senior DUP source told this website.

“They have hardened their position. They have done nothing to suggest any interest in devolution,” he added.

“Any unionist out and about during the summer will have heard resolutely: ‘No Irish Language Act’.”

This source was speaking to eamonnmallie.com on the condition of anonymity.

He pointed to party leader Arlene Foster’s comments earlier this month when she said she had regretfully come to the conclusion that Sinn Fein aren’t interested in devolution; pointed also to Simon Hamilton’s comments more recently when he dismissed Sinn Fein’s call for a formal resumption of talks as a stunt.

There is “no basis for white smoke”, the source told this website.

As the British and Irish Governments consider how to resume these negotiations, it is a gloomy yet realistic assessment, and it is a long way from the Paisley and McGuinness era when there was a mood that anything was possible.

In the decade since, hope has been drained out of this process, and it is now at that difficult moment of decision.

On Tuesday, again on Twitter, Edwin Poots added his thoughts: 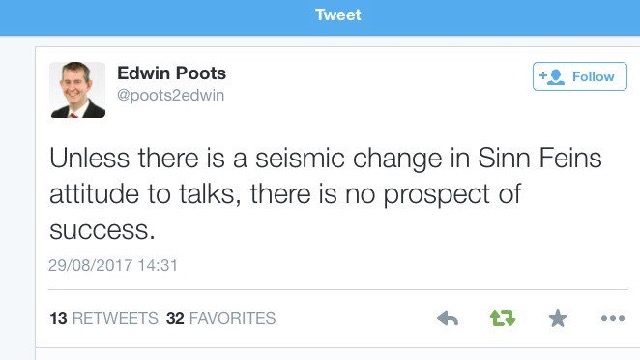 By now, Poots, like his colleagues must know, there will be no such “seismic change”.

Republicans will tell you that Gerry Adams “is not letting it go” – a reference to the Stormont project; that he wants the institutions up, but “on a credible basis”.

“If not, he’ll let them go,” one source commented.

This is not just about an Irish Language Act. It is about marriage equality, a workable legacy process, a Bill of Rights and proper partnership at Executive level.

It is also about the fallout over Brexit.

Adams has  “no wriggle room”.

“We gave the unionists too much time,” a republican commented “They took advantage of Sinn Fein being pragmatic. We tried.

The above is a reference to the vote tally in March and June, a popular response to the resignation of the late Martin McGuinness as deputy first minister.

So, there is no short cut, no going back to the Stormont Executive before outstanding issues are resolved.

The knot is that tight.

A talks insider offered this thought: “They [the DUP]have figured out that Sinn Fein can’t do a deal with them. So it’s dead. It looks more and more like direct rule.”

What will British Secretary of State James Brokenshire and Irish Foreign Affairs Minister Simon Coveney work out in the next days and weeks?

What if the deadlock cannot be broken?

What is their alternative to devolution?

How do the governments protect the agreements of the past two decades?

Some wider British-Irish understanding will be needed.

Stormont, this place of devolution, is it all over bar the shouting?