You are at:Home»News & Current Affairs»Why the Charlottesville statue of Robert E. Lee should be removed – by Patrick McKeating
Social share: 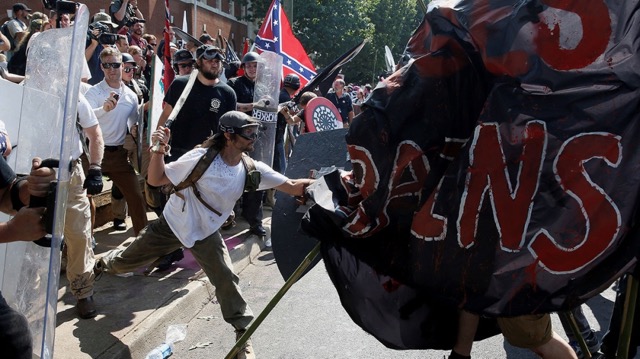 Who was Robert E Lee?

In our seemingly binary world of snap good vs evil judgements, we must remember that Lee was a complicated and controversial individual who was a product of his time.

Yes he was an abolitionist but he did own slaves.

Yes he believed that slaves were better off in America than in Africa and that God, not man, would eventually free them.

Yes he was part of a ‘slave raid’ to capture free black Americans and return them to their owners in 1863.

Yes he fought on the Confederate side of the Civil War but on the constitutional ideals of state rights rather than for the institution of slavery.

Yes at times he was an incredible general, perhaps one of the modern greats but he also made foolhardy decisions and lost key battles.

But this statue is not about Robert E. Lee but rather what he symbolised when it was constructed in 1924.

What is the context of the removal of the statue?

We are not seeing the heating up of this pot but rather the water bubbling over as it boils.

The wider issue in America started with the popularity of the ‘Black Lives Matter’ movement in 2014 alongside the debates surrounding the flying of Confederate flags on government buildings in the American south.

The statue attracted a lot of local attention and several campaigns to remove it resulted in the city council of Charlottesville debating the issue.

Eventually they came to a decision in February to remove the statue but a subsequent court case regarding their right to do so has delayed the action.

When and why was it built?

Perhaps the most important part of this debate is the discussion of when and why it was built. The statue was unveiled in 1924, 54 years after the death of Lee and 59 years after the Civil War ended.

This was a time of paranoia in a post-war economic recession. Fear gripped the white American working and middle classes over immigration from Mexico and Eastern Europe, the spread of communism, the migration of black Americans from the rural south to urban centres and the rise in womens rights.

It is in this context that the KKK enjoyed huge popularity. In 1925 their membership was between 2 and 5 million people, largely from the middle classes who saw their way of life as under attack. As a result of this public pressure, more segregationist Jim Crow laws were spread throughout the south.

It was in this climate of insecurity and close-mindedness that the statue of Robert E. Lee was commissioned and constructed. A 26 feet high bronze sculpture which was not a war memorial but rather a message to the people of Charlottesville.

Why it should be removed.

If this statue was erected to commemorate the dead of the Civil War or the life of Robert E. Lee then the debate over it’s removal would take a different form.

However it was built at a time when white supremacy briefly dominated the American political discourse.

It is within this context of this particular piece of bronze artwork that we cannot compare it legitimately with Queen Victoria (erected 2 years after her death) or Dr. Henry Cooke (erected 7 years after his death) in Belfast.

And finally we should remember that removing statues such as that of Lee is not to hide them from history but to declare that their memory should be in a museum and not on a pedestal.