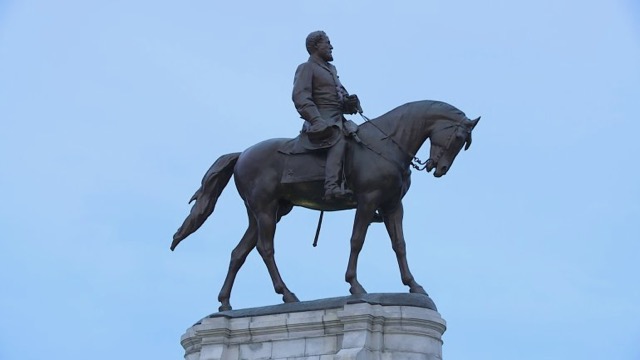 General Robert E. Lee is recognised as one of the greatest military strategists in American military history.

He is the son of American Revolutionary War hero Henry Lee. He studied at the prestigious West Point Military Academy and went on to distinguish himself during the Mexican-American War.

Lee was quite indifferent to politics preceding the Civil War and wasn’t in favour of secession. As leader of the Confederate army and following his surrender to the Union forces, he wanted the Confederate states to put the civil war behind them and reportedly opposed the building of statues in his honour.

Moreover in an 1856 letter penned by Lee he wrote that slavery was ‘a moral and political evil.’

Be that as it may, as the old saying goes, actions speak louder than words. Yes, Lee may have opposed secession from the union but he resigned from the United States army in April 1861 and went on to lead Confederate forces against it.

Yes, he seems to oppose slavery in an 1856 letter but in 1857 he inherited hundreds of slaves from his deceased father-in-law and refused to emancipate them as was stipulated in the will. He was in favour of ‘firmness’ (flogging) when dealing with slaves and forcing them to ‘carry out their duty’ as he put it.

Personally, I’d prefer that the statue of Lee wasn’t there in the first place. In my ideal world it wouldn’t be there and neither would many other statues.

Cromwell, for example, stands proudly outside Westminster, a man who committed genocide in Ireland and sent over 50,000 Irish people overseas as slaves or, as some prefer to call them, indentured labourers.

Churchill, lauded as the one of greatest Britons, allowed millions to die of starvation in Bengal, India. Yet he also stands proudly at Westminster.

However, we don’t live in my ideal world. We live in a world where some people; in fact millions of people admire the likes of Robert E Lee, Churchill and Oliver Cromwell.

Right around the globe there are examples of monuments and statues that are offensive to huge sections of the population though they still stand.

In beautiful Riga, liberated from Soviet communism in 1991 there still stands the Academy of Sciences, a 23 storey building decorated with patriotic symbols of the former USSR and the 1905 monument to the Russian Revolution. Why have they not been altered or removed? Possibly in a city with a Russian population of over 40%, the authorities realised that many in that country still have an affinity to these outdated ideas and monuments.

In New Zealand there are statues to Captain Cook, a man who initiated the European colonisation of New Zealand resulting in the deaths and subjugation of the Maori population.

Indeed a campaign was begun in South Africa in 2015 to remove a statue of Cecil Rhodes from the University of Cape Town (The father of Apartheid) and was initially opposed by the ANC. They said in a statement that the removal of the statue was ‘An insult to South Africa’s rich history.’ Later the ANC supported the statue and others relocation to museums.

Indeed in my own city of Belfast we have numerous statues and monuments that should be removed today were we to apply the ruling of Charlotesville City Council here.

Standing regally at the main entrance to Belfast City Hall is Victoria, Her Imperial Majesty the Queen-Empress, Princess of Hanover, Brunswick, Lüneburg, Saxe-Coburg and Gotha and Duchess of Saxony or, as many in Ireland prefer to call her, The Famine Queen.

Victoria ruled over Ireland as an estimated one million people starved to death and another million emigrated.

Additionally, a statue of Dr. Henry Cooke stands on College Sq East. The good doctor opposed the emancipation of Catholics during the early part of the nineteenth century and even campaigned against the ringing of St Malachy’s Chapel bells after the church was built.

There are other controversial monuments and symbols in Belfast that one community or another find offensive and would wish to see removed. However, in divided societies we have to recognise, no matter how uncomfortable that may be, that large proportions of our populous admire, are loyal to and support these monuments.

If we continue to remove them we end up with sterile non-descript neighbourhoods devoid of any character.

Instead of taking down why not build up?  Instead of spending $700,000 on removing the homage to Lee why not use that money to build a monument to a civil rights activist right next to it?

Likewise here in Belfast, I wouldn’t support the removal of the statue of Queen Victoria or Dr Cooke, for that matter, because a huge proportion of my fellow citizens admire these people. Instead, I would advocate equality, the erection of memorials to historical figures from the other side of the argument.

Perhaps authorities could erect ‘protest plaques’ next to controversial figures detailing a community’s opposition to the historical figure and allow those tourists and passers-by make up their own mind.

The organisers of the white nationalist march in Virginia have used the removal of Lee as a rallying cry to their perceived and unfounded claim to the erosion of white European identity in the United States.  They will only use this as fuel to continue and promote their divisive racial campaign.

Social share:
Previous ArticleWhy I am not buying into all this talk of a quiet summer – By Clare Bailey MLA
Next Article If you can be bought, then you can be sold, and our Unionism is most emphatically not for sale – By Robin Swann