You are at:Home»News & Current Affairs»Arlene – you can’t have your ‘Cultural Cake’ and eat it if you don’t stand up to the Gregory Campbells – By Eamonn Mallie
Social share: 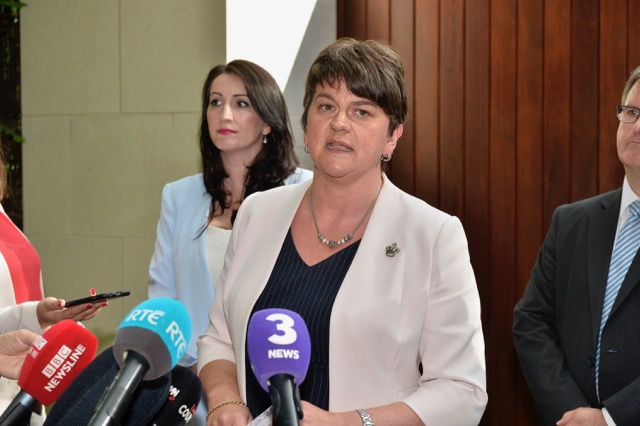 One of the main arguments prosecuted by DUP leader Arlene Foster and some Unionists to counter nationalist demands for equality and parity of esteem is that nationalists are seeking ‘Cultural Supremacy.’

‘Cultural supremacy’ can be defined as follows: ‘someone believing that a particular type or group of people should lead or have control over other types or groups of people because they believe they are better.’

Unionists are laying the charge that nationalism is about super imposing its notion of culture upon those who do not share its outlook – seeking to demonstrate it is superior.

Culture is further defined as ‘the way of life, especially the general customs and beliefs, of a particular group of people at a particular time.’

People normally choose or inherit one or more of these to define their identity or that for which they stand.

On balance it is this mix in our cultural make-up in Northern Ireland which ought to add to the richness of the tapestry of life: this mix has real merit conditional upon there being no desire to dominate.

The late Cardinal Tomás Ó Fiaich spelling out why he disagreed with the IRA’s campaign of violence told me “if I live under the same roof as you and I go out each weekend and I get drunk, return home and I break your windows  – you will not invite me to your Christmas party.”

The above was a metaphor to demonstrate the wrongness of the IRA terror campaign waged against their Protestant neighbours.

This was not the way to build bridges then or now.

Opting to ignore the emotions or feelings of one’s neighbour may well come down to ignorance, bad manners, intimidation, bigotry, racism, anti-Semitism and there may well be other motivating factors including xenophobia.

In society in Northern Ireland, parading, marching, policing, anniversaries, sport, the flying of flags, cultural expression, legal protection of the language one chooses to speak such as ‘gaeilge,’ can all end up ‘hot button’ issues.

Northern Ireland obsesses more about the right to march than most normal societies.

It obsesses more too about which flag flies where and when.

In a democracy the right to protest, march or congregate is a given, conditional upon all of this happening within the framework of the rule of law – a rule of law which cannot be set aside where any of the aforementioned encroaches on the rights of other citizens.

Many of the cultural and political events people want to mark in Northern Ireland have deeply rooted histories like the 1916 Easter Sunday Rising which ultimately led to the establishment of the Republic of Ireland.

Common sense demands that the Easter Sunday Parades, marking the 1916 Rising, do not take place at any interface or in a district where the feelings of the adjacent community are incompatible with such a commemoration. Sensibly this does not happen.

Were such a violation to take place the rule of law would justifiably be applied by the police rigorously and must not be set aside, remaining mindful all the time, of the rights of those who identify with The Easter Sunday Rising.

The thesis prosecuted above argues the rule of law is paramount in all circumstances.

In the past month a small number of people in business and public life in Belfast, all non Catholics, asked me “why is the rule of law set aside in Belfast in July?”

Surely that is a question for Chief Constable George Hamilton – not for a journalist I thought.

The question posed was prompted by events surrounding the Twelfth of July demonstrations and the Eleventh Night bonfires lit in many Protestant/loyalist districts in Northern Ireland.

Many of the bonfires are made up of wooden pallets and tyres with some reaching over 100 ft tall.

In North Belfast Winston Irvine advises that following a consultation in 2009 the number of bonfires in the Woodvale area interfacing with Ardoyne were rolled into one, mindful of reducing levels of pollution and danger to property and members of the public.

He further adds that it was agreed to end burning the Tricolour and effigies of elected members of Sinn Féin and the SDLP and Catholic Church symbols.

This is not the case in East Belfast and in other districts.

Less than due regard is afforded to the sites elected for the bonfires by the builders in some cases, with little evidence that the appropriate agents of State pro-actively intervene to re-locate these bonfires despite the potential dangers to life and property.

There is ample evidence of scorched earth and environs and damaged property in the aftermath of the Eleventh Night to persuade the authorities to actually police these activities in the interests of all, including the bonfire builders who have shown themselves to be extremely architecturally adroit.

Clearly my questioners had in mind the apparent indifference of the agents of law and order in challenging the displays of flags in mixed areas, of sectarian, anti-social behaviour, of the burning of the Union flag in the case of a Derry bonfire recently, of the burning of The Tricolour, nationalist symbols, Catholic symbols, and effigies of elected members of the SDLP and Sinn Féin on Eleventh Night bonfires.

Why do the authorities appear to abdicate in applying the rule law in July when it comes to these matters? They rigorously apply the rule of law throughout the rest of the year.

How can Arlene Foster portray the nationalist demand for legislation to protect the use of ‘Gaeilge’ from abusers of the language like Gregory Campbell MP as a push for ‘Cultural Supremacy’ when she refuses to call his likes to order?

To her credit in the wake of some of the more extreme outcroppings on bonfires Mrs Foster said:

“It was wrong to have posters of political opponents.

Mrs Foster also addressed the issue of bonfires built close to property, including homes that had to be doused with water by firefighters to protect them from the heat and flames.

“It is important that those who want to celebrate by building bonfires have respect for the people who live close by.

“Unfortunately, we saw over the Eleventh Night some buildings were in danger of being damaged and that’s wrong – because those people have to live there and they have to continue to live there after the Twelfth is over” she said.

How cognizant however is Mrs Foster that in the eyes of nationalists what happens during some of these Orange demonstrations and the Eleventh Night is ‘cultural supremacy’ writ large?

What is baffling to nationalists also is the apparent complicity of the police and the agents of the State in adopting a ‘softly softly approach’ to manifestations of sectarianism and burning of nationalist effigies etc.

Orangeism has a long history behind it: thousands and thousands of people identify with what they view as both a religious and a patriotic association: religious in that it has its roots firmly grounded in England’s so called Reformed Heritage, and patriotic, through reflecting an allegiance to the British Crown.

Why should nationalists logically or legally seek to deny these facts of history to which their Protestant neighbours so dearly cling?

Were nationalists to move to undo the monuments, trappings and symbolism associated with Orange culture including its murals, bands and other lawful manifestations – that would be gratuitous and an act of ‘cultural supremacy.’ Burning Orange halls is indisputably an act of ‘Cultural Supremacy’ which is totally unacceptable.

There is an onus on all nationalists to stand up to such developments.

That said, there is an onus on the leadership of the Orange Order and on people like Arlene Foster to lead to bring to an end what can only be interpreted by right thinking people of all persuasions, the offensive perverse burning on bonfires of effigies of nationalist elected representatives, of the Tricolour and of catholic symbols.

The same duty of care falls to nationalist politicians in the event of the burning of the Union flag on any bonfire.

In conclusion, while respecting Arlene Foster for her condemnation of the worst aspects of the Eleventh Night bonfires she is on narrow ground talking of ‘cultural supremacy’ at the hands of nationalists, as long as she fails to call out the cheer leaders in her party including Assembly members and MPs who abuse ‘Gaeilge’ as a language and lend support to sectarianism through their presence on the Eleventh Night while effigies of nationalist politicians are being set alight.

Why will she not exercise some control over her elected members – such as Gregory Campbell who wallows in practising spewing out an anti nationalist commentary smacking of ‘Cultural Supremacy?’

He is not a lone wolf: witness the decision of Minister Paul Givan to kill off the ‘Irish Language Bursary funds’ for young people wishing to spend time in the Gaeltacht where Gaeilge is spoken as its first language.

No one in their right mind ought to afford tolerance to the reported train of thought attributed to Sinn Féin president Gerry Adams replying to Gregory Campbell’s parodying of the Irish language.

Adams said he was often asked by republicans “What’s the point?

“They weren’t blaming Sinn Féin – in fact they were making the point that Sinn Féin were doing their best,” he said.

“But what’s the point?

“The point is actually to break these bastards – that’s the point.

Michelle Gildernew MP’s talk about ‘teaching Arlene Foster manners” is not helpful either.

She was rightly ticked off by Northern Ireland Sinn Féin leader Michelle O’Neill.

Where is the grace or healing in any of these derogatory comments uttered by politicians on either side of the community?

Where is the grace in Arlene Foster accusing nationalists of demanding ‘Cultural Supremacy’ while wilfully confusing this with nationalists’ request for fair play and justice?

How can one take Mrs Foster seriously on these matters all the time ignoring Gregory Campbell and others in her ranks who consistently spew out anti nationalist insults and rhetoric about their language and culture?