You are at:Home»News & Current Affairs»‘Strong People Reach Out’ – By Peter Osborne
Social share: 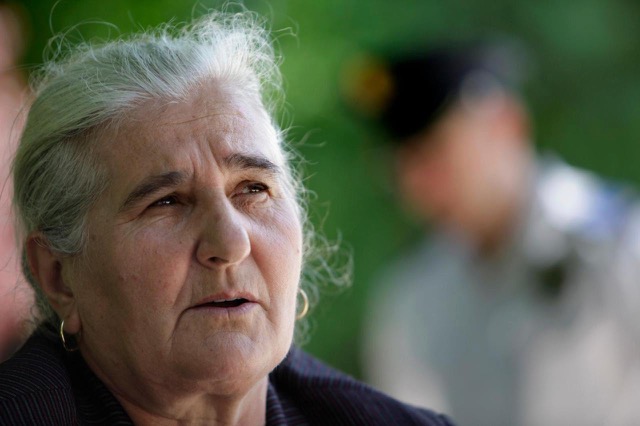 A very special speaker will be in Northern Ireland next week.

Munira Subašić is President of the Mothers of Srebrenica.  She campaigns for an end to prejudice to make sure atrocities like the genocide at Srebrenica never happen again.

Her story shows how great strength can come from unimaginable pain.

As the president of the Mothers of Srebrenica she shares what happened to her in Srebrenica in July 1995.

Along with her husband Hilmo and youngest son Nermin (aged just 17 at the time) she fled to the UN base in Potočari to seek refuge and protection. But Nermin was soon taken by Bosnian Serb soldiers. Then her husband was taken too.

It would be the last time Munira would see either of them alive.

Years later, Hilmo’s body was discovered in a mass grave. Munira buried him in 2004.

Forensic scientists have been unable to find all of Nermin’s remains. After 18 years two small bones were recovered, both in mass graves at sites of mass execution, 25km apart. Nermin’s grave has the least remains of anyone buried in the Srebrenica-Potočari cemetery where the victims of the genocide now rest.

Around 1,000 people are thought to be still missing and one or two mass burial sites still not found, 22 years on.

Munira uses her pain as a driving force for seeking justice, not only for herself, but for all victims of the Bosnian conflict. She has spent years protesting and speaking publicly on the events of 1995 in the hope that no other mother will have to go through the same trauma and pain.

There are many thousands of people still in pain in Northern Ireland, living with loss every day. Like the rest of us they may turn on the TV and radio news to hear constant squabbling about power, political structures and who wants to govern for whom.

Meanwhile, their loved ones remain lost. The emptiness and silence will still be with them long after talks at Stormont fall silent, again.

It is ironic that Munira is visiting Northern Ireland a week after a further collapse of talks aimed at restoring devolution in Northern Ireland. The magnitude of what happened in Srebrenica, when nearly 8,500 people were killed in just a few days, puts context to a failure of talks where same sex marriage, language, cultural expression or cultural supremacy have been central.

In what sort of political or peace process are we engaged here when such matters cannot be agreed; when the transformational issues still wither?

If the victims of Srebrenica were to make a plea to us in Northern Ireland, it may be to stop squabbling and get on with meeting the needs of the survivors, the parents, siblings and children; it may be to rise above the sectional in the interests of the many; it may be to be real leaders, make sure that conflict and the prejudice that leads to violence never happens again; and to do what is needed to dismantle the hatreds.

Being generous and acknowledging the need of others shows strength not weakness.

Maybe that is the real lesson of the last few days and will be a lesson in days to come.

The main commemoration of Srebrenica in Northern Ireland will take place at 6pm in Belfast City Hall on Monday 10th July.  To attend email rsvpni@srebrenica.org.uk