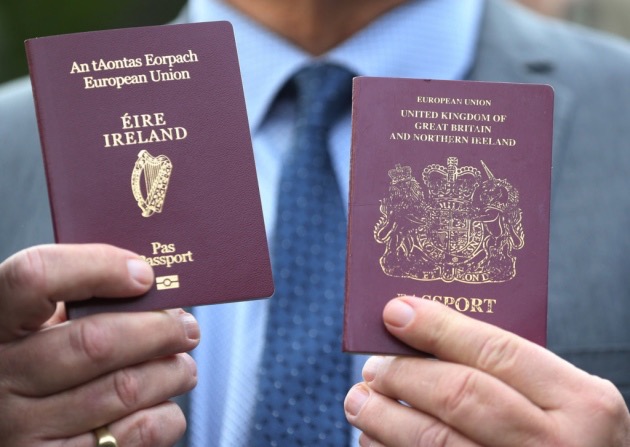 In recent days the debate around dual Nationality and dual citizenship has been re-ignited, following revelations that BBC presenter Stephen Nolan has obtained an Irish passport to compliment the British one already held.

This issue goes much wider than dual Nationality, which was freely available prior to the Belfast Agreement.

This poses the key question in relation to the intent- in a contested state- of availing of such.

The Belfast Agreement was sold to Unionism under the plainly false assumption that Nationalism would prioritise their equality agenda over the constitutional issue and would accept the legitimacy of Northern Ireland, providing that they felt they were able to play a full and meaningful role.

There was the false notion, fed because the agreement meant all things to all people, that dual citizenship would create the environment whereby Nationalists could live happily and play a meaningful role in a settled state.

Of course Nationalism never had any intention of dividing their ‘equality’ agenda, of which the citizenship  strategy is a key part, from the constitutional question.

The rightful rejection of this equality agenda by Unionists is framed as ‘bigoted, sectarian and hard line’.

This is part of Sinn Fein’s strategy to use rights based language to advance political aims and present Unionism as regressive on the International stage.

Unionism’s resistance to the equality agenda is based upon the quite correct realisation that rather than Nationalism’s ever growing list of demands being part of a settlement for a stable Northern Ireland, it is a Trojan horse designed to undermine the legitimacy of the state and feed into the much larger Nationalist political aim of Irish unity.

The equality agenda is the art of dressing up political aims as civil rights.

The majority of people pursuing Irish passports do so in order to assert their rights as Irish citizens living in what they believe is an illegitimate state.

Some Unionists however have obtained Irish passports for cultural reasons because they identify with certain aspects of Irish culture, as is their right. If one holds two passports then this is a de-facto acceptance of the Nationalist position that Northern Ireland is neutral.

The next logical step is that if you accept the citizenship parity between Britishness and Irishness, then so too would you have to accept that the Irish national flag should be held in equivalence with the sovereign Union flag.

Of course to follow it right through to its logical conclusion, if you accept the aforementioned then the only end position is acceptance that- at the very least- Dublin and London should have joint-sovereignty over Northern Ireland.

The issue of citizenship is so crucial in a contested state because it provides those seeking to undermine the state with an avenue to demand parity of esteem for minority political aspirations.

It seeks to place an obligation on the state to recognise Irishness in parity with Britishness.

It is a demand not for parity for people, but rather for political aspirations. At its most basic level it is a demand that the minority aspiration of Irish unity be afforded equal standing with the democratic  wishes of the majority to remain British.

It is not only a back-door way of undermining the principle of consent, but is part of the overall trajectory of the ‘peace process’.

A process by its very definition has a beginning and an end. Therefore to discover the end of the peace ‘process’ it is only logical to look at the primary agreement underpinning it, and what end is envisaged within it.

The Belfast Agreement allows for only one ending, the trajectory leading only one direction, and that is towards a referendum on Irish unity followed by a continuous cycle of referendums every seven years until the Northern Ireland electorate decide they want to join a United Ireland. This is the end game, the end of the process.

All our political battles must be underpinned by a commitment from all that never again must violence take the place of democracy.

Peace must be an absolute commitment, not a commitment to peace only within the confines of the ‘process’.

This is a fool’s paradise. Northern Ireland is a contested state, the name of which Sinn Fein cannot even utter.

Unionism must be alert to the fact that citizenship and equality are not stand alone rights based issues, but rather the key battle ground in Nationalism’s overall political objective of achieving Irish unity.