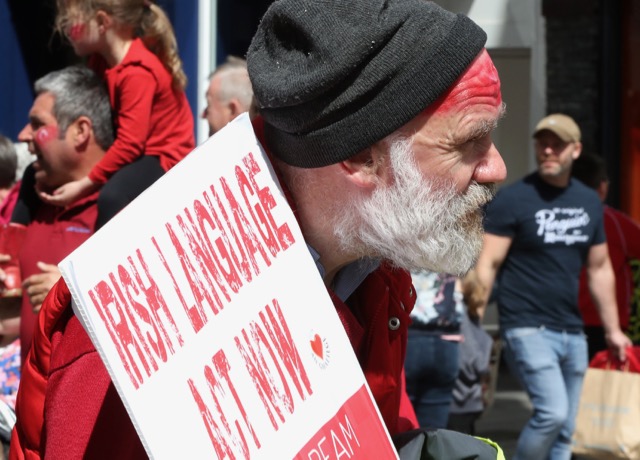 ‘Cultural Supremacy’: we’re finally at the nub of the problem, a time of opportunity or missed opportunity. Will it be breakthrough or stalemate?

Our seemingly endless series of interrupted talks has now been put in limbo. Your guess and mine about how long our stay in limbo will be are probably as valid and useful as Brokenshire’s. For sure there is no agreement and no likelihood of one soon as we enter ‘Marching Season’.

Talks will, we are told, rumble on after a fashion before they resume in earnest sometime after the summer.

There is deadlock in the words of Arlene Foster because: ‘what we can’t see is one section of the community having cultural supremacy over others’.

I would wholly welcome that statement, were it genuinely intended to signal an end of cultural supremacy. I don’t believe Arlene meant it in the sense that I, or many others, would like to interpret it.

Furthermore, from tenor of political spokespersons in the aftermath of the hapless Brokenshire’s latest pronouncement, it clearly doesn’t signal an end to the dogfight nor the zero sum gain politics which have bedevilled this place since Unionist leader James Molyneaux, greeted news of the 1994 IRA ceasefire with the statement that it was ‘the most destablising event since partition’ and ‘the worst thing that could have happened to us’.

He certainly got it right with the former, as far as Unionists were concerned. For all of us who live here and who have lived realtively free of violent conflict since 1994 his latter statement was way off the mark. Things have changed here since the days of the Lords Molyneaux, Trimble and Paisley. Many would say and many others would admit in their heart of hearts that they have changed utterly and irreversibly. All the certainties have gone.

Back now to the current leader of Unionism Arlene Foster. On the occasion of her elevation to the leadership of the DUP my organistion, the West Belfast based Irish Language development agency Forbairt Feirste (which is charged with promoting and developing Belfast’s Gaeltacht Quarter in partnership with government) wrote to her (10/12/2015) in the following terms:

“Can I, first of all, on behalf of the Gaeltacht Quarter Board, congratulate you on your elevation to the leadership of the Democratic Unionist Party. We wish you well in tackling the challenges which face you and the rest of us.

“We believe in taking opportunities for building goodwill and mutual understanding and would therefore like to invite you to organise a party delegation to visit the Gaeltacht Quarter at the invitation of Forbairt Feirste. The purpose of the visit would be to both acquaint yourselves with some of the work that is ongoing in the Gaeltacht Quarter and to allow for us to engage in a positive exchange of views on what we can do to fulfil our mutual aim of ensuring there are no cold places in our society.”

We recieved not as much as an acknowledgement of receipt of that letter.

We have written in similar terms to the DUP on several occassions. The latest of those was in the aftermath of Foster’s statement that she was prepared to meet Irish Language organisations.

In our last correspondance with her on 13/4/2017 we again invited her to meet with us and expressed the hope that we would hear from her soon.

We still await even the courtesy of a reply.

Fair enough we are where we are, as they say. The invitation stands.

We believe that there is everything to be gained by dialogue and nothing to be lost. Our cultural identity will not be diminished by the encounter and neither should anyone else’s.

Reflection is being advised all round. Perhaps it’s time for us all to step back and try to see this stalemate and stasis as opportunity rather threat. We all, I’m sure, agree that half solutions or more of what we’ve experienced for over twenty years is really not a useful or desirable outcome.

Notwithstanding all the previous agreements and compromises there is clearly unfinished business. It requires a step change if sustainable arrangements are to be agreed.

So pausing for reflection I’d like to offer my perspective.

There is probably nothing more important to us all, regardless of our background than identity. The simple but profound questions: Who am I? From where do I come? How do I interact with the part of the world in which I live? These are fundamental questions to all humans. The cultural expression of the identity which we derive (or indeed construct) from exploring these questions is personal, precious and quite often complex, and it is always a journey.

It is never one-dimensional and the majority of us will take huge umbrage with anyone who disparages our culture. In situations of conflict and of competing cultures this can often turn nasty, violent or just be hugely disruptive.

I don’t need to tell anyone here about that. Whatever we say we all know the score.

Bearing this in mind and without rehashing how we all got to where we are, let’s now consider why thousands, young and old took to the streets of Belfast to demand an Irish Language Act, first promised at St Andrews over a decade ago. Let’s leave aside party politics and consider the question seriously in light of the fact that we’re all going to continue sharing this small piece of territory for the foreseeable future.

Putting your cards on the table is always a good place to start any discussion. I’m a Gael. I’m an Irish language activist. I work in the Irish Language sector. Politically I’m an Irish Republican and a socialist. I am a husband, a father of five and grandfather to five, all of whom have been brought up bilingually and have received and continue to receive the highest standard of Irish Medium education, much in the case of my older children without state support. They haven’t faired too badly. The first two have graduated from university, the next two are currently at university and the last is manning up for A Levels. Plenty more like them are coming through. All bilingual, many trilingual. All of them confident, tolerant and outward looking citizens, a credit to any normal society.

From my maternal grandfather, I got a familiarity with and a grá (love) for the colloqualisms of his native north antrim. I’m as comfortable walking the hills, ag spastóireacht sna cnoic or even rannerin’ roon tha brae, all the same activity expressed in different idiom.

Provided I don’t insult my neighbours or cause offence or harm in so doing I fail to see why anyone should have a problem with it.

There are, however, self-evidently those who do have problems with my Irish identity and my right, as a citizen and taxpayer, to live my life through Irish. Time out of number I have been appalled and angered with insults that I have had to endure and which all Irish speakers have had to endure. All who marched in Belfast demanding an Irish Language Act feel the pressing need for legislative protection of our rights as taxpayers who choose to live their lives bilingually. We don’t trust unionist politicians to respect our rights. Their behaviour gives us no reason to trust them. We won’t settle for half measures or fudged cultural acts and the majority of local politicians agree with us.

Those who have a problem with Irishness and Irish language speakers, are in two broad categories, firstly those who hold and have held antagonistic views about Gaelic Language and culture since the foundation of the northern state and those who currently vote for parties which espouse this position in greater or lesser measure.

Secondly there are those who hold these antagonistic views and seek to be in government and who furthermore wish to equate and link my Language with Orangeism, or with the cultural allegiances of others which I do not in any way share but which I do not seek to deny to them. It’s not on. It won’t happen.

Now to the elephant in the room, which has led to the latest Stormont impasse and has blighted this corner of the Island for too long.

Whatever about the party political jockeying which surrounds this latest hiatus, we are in the situation we’re in beacuse the majority of unionism feels the DUP are the only ones who will stand firmly for the Union with Britain and who will uphold their interests and the majority of nationalism feels only Sinn Féin will stand firmly for the new dispensation we all believed had been achieved through the GFA and subsequent compromises which the electorate endorsed through the mandates they gave.

Both the current DUP and Sinn Féin mandates are impressive. Only 52,000 votes separate them.

The state in which we live, was and is ultimately a product of British policy towards Ireland since the early 20th century. The state is approaching 100 years of age and all of us, however much we dispute and contest our ‘shared history’ clearly agree that this is not a stable, harmonious or truly peaceful place to live in.

For most nationalists Cultural Supremacy has meant and means only one thing: Orange and unionist domination and naked sectarianism. Nationalists genuinely feel and have felt like second class citizens in our own place. Most have no affinity with Britishness and most certainly none for unionism, loyalism or Orangeism. Yet we are surrounded on every side by the symbols of Britishness and the ‘unique displays of Britishness’ which dominate the public space.

I pay a TV licence yet every year must witness airtime given, courtesy of the BBC and my money, to what is to me is a display of naked sectarianism, foisted upon us under the guise of an Orangefest. Then there is the effrontery of the bonfires, the seas of flags, kerb painting and territory marking. Many bonfires are lit by DUP and unionist worthies. Many others besides are bedecked with the most grossly offensive sectarian, anti-nationalist and anti-catholic displays of hatred. Most are built throughout my native city with the clear preference being to have them in as close proximity as possible to the misnamed peace walls.

Young loyalists, driven into paroxysms of ‘loyalist grievance’ are ignored, even worse, indulged as they erect huge and in some cases life threatening bonfires wherever they like, be it private or public space. This is tolerated and colluded with by those in authority and come the night of the 11th of July there will be scenes of drunkeness and drug taking with blood-curdling songs celebrating sentiments such as  ‘we are up to our necks in fenian blood’ and other even more offensive lyrics yet we are told by the DUP that this is to be equated with protection of Irish, an indigenous minority language which has the oldest vernacular literature in Europe and which is a shared heritage for all.

Language protection is a Europe wide practice. Our neighbours in Scotland and Wales have legal protections. How much more do we need them here given our circumstances?.

Let’s hope the stalemate and changed realities of demographics produce real dialogue whenever it may come. Things have changed utterly. Genuine new thinking is needed if we are to arrive at workable arrangements. Half deals and cobbled together deals just won’t cut it. Let’s travel in hope.